Colby Samide, a junior, organized a group to make it easier for those having to learn from home. 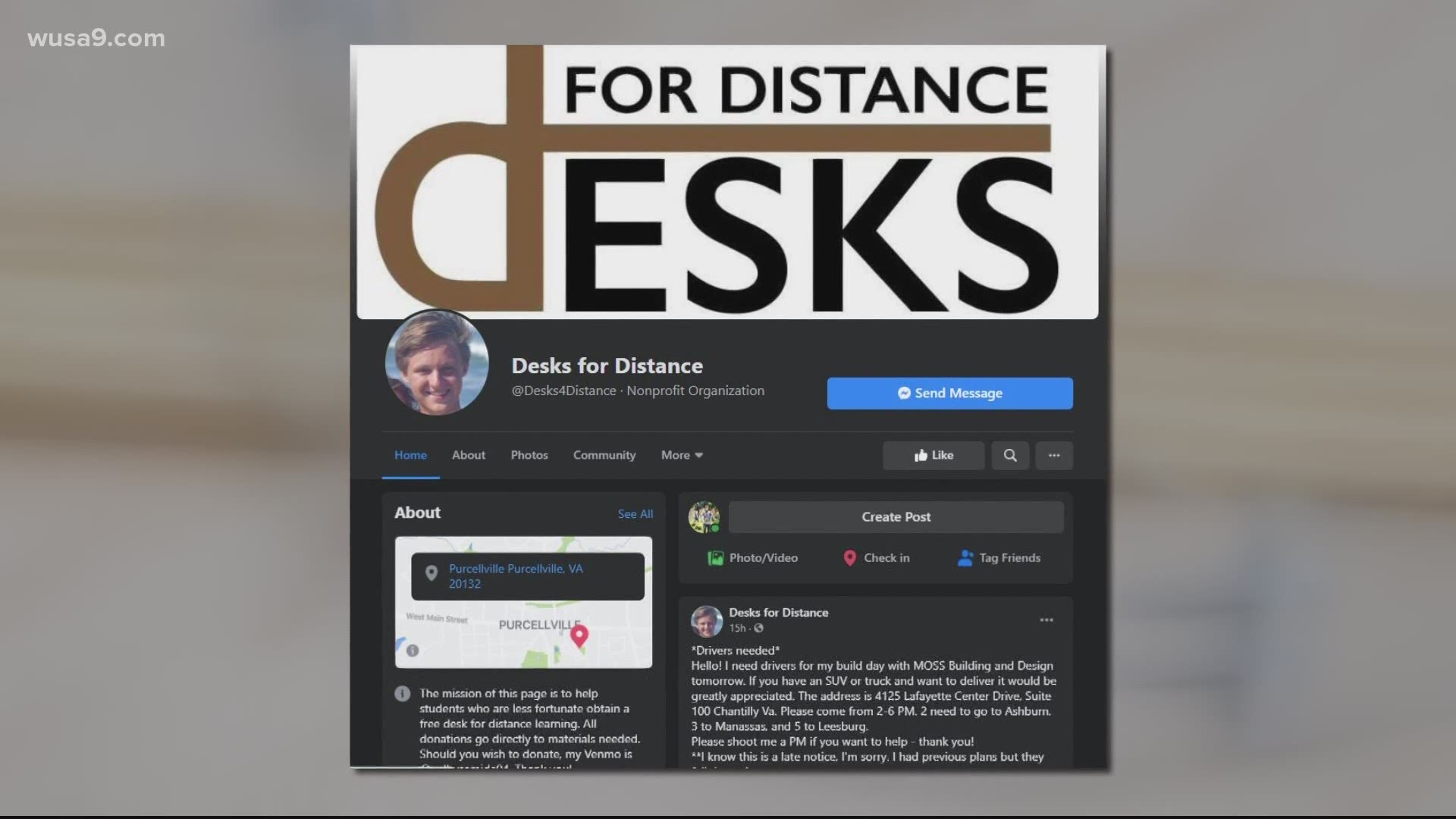 CHANTILLY, Va. — Students in Northern Virginia who don’t have a desk to do their schoolwork might now have the same opportunities as their peers, and it’s all thanks to one high school student.

We stopped by Moss Building and Design near Chantilly where Colby Samide, a junior at Woodgrove High School and creator of “Desks for Distance”, held an event in which he and several volunteers from local businesses pitched in one hammer and nail at a time. They built 50 desks for underprivileged students in Loudoun County.

“I’ve loved to build things as long as I can remember,” Samide said. “My woodworking obsession really began in ninth grade where I took a shop class.”

Since then, the Purcellville teenager’s creations include a hanging daybed, a bench for his firepit and picture frames. It wasn’t until virtual and distance learning began that he realized he needed a better workspace to concentrate on his schoolwork. He made his own desk and decided he can help others too.

Hello again everyone! I’ve created a YouTube video on my desk process. If you’re interested in building one, give it a...

Posted by Desks for Distance on Sunday, September 13, 2020

“I definitely understand the need for a specific workspace dedicated to you,” said Samide. “I know there’s children out there whose parents can’t afford the things they need. It’s definitely a struggle for them and I know that this is helping them.”

Inspired by a Maryland group called “Desks By Dads”, his efforts are over 100 desks after today’s build.

RELATED: Get Up Give Back gives $1000 to Desks By Dads

“I’m really glad this has got so much attention so I can help out the community and others can chip in as well,” Samide said.

For folks at Moss Building and Design, it was a no brainer to help Samide. The company, along with Lowe’s, My Guys Moving and Storage and Sultry Soul Food pitched in with material, volunteers and of course a meal to help get the desks built.

“I don’t think enough people give credit to young people, who are really the backbone of the community,” said Jenn Zschunke of Moss Building and Design. “Colby is a fantastic example of a person who has put together something that he loves and knows how to do, which is woodworking and building into something that is really meaningful and important for those who really need it.”

Samide tells WUSA9 that he will take a break and will make desks again in the winter. He has his eyes set on concentrating on his school work. If you want to learn more about “Desks for Distance” go to their Facebook page.

RELATED: People are making their own desks due to coronavirus shortage