Republican Glenn Youngkin and Democrat Terry McAuliffe talked about their vision for Virginia as governor. 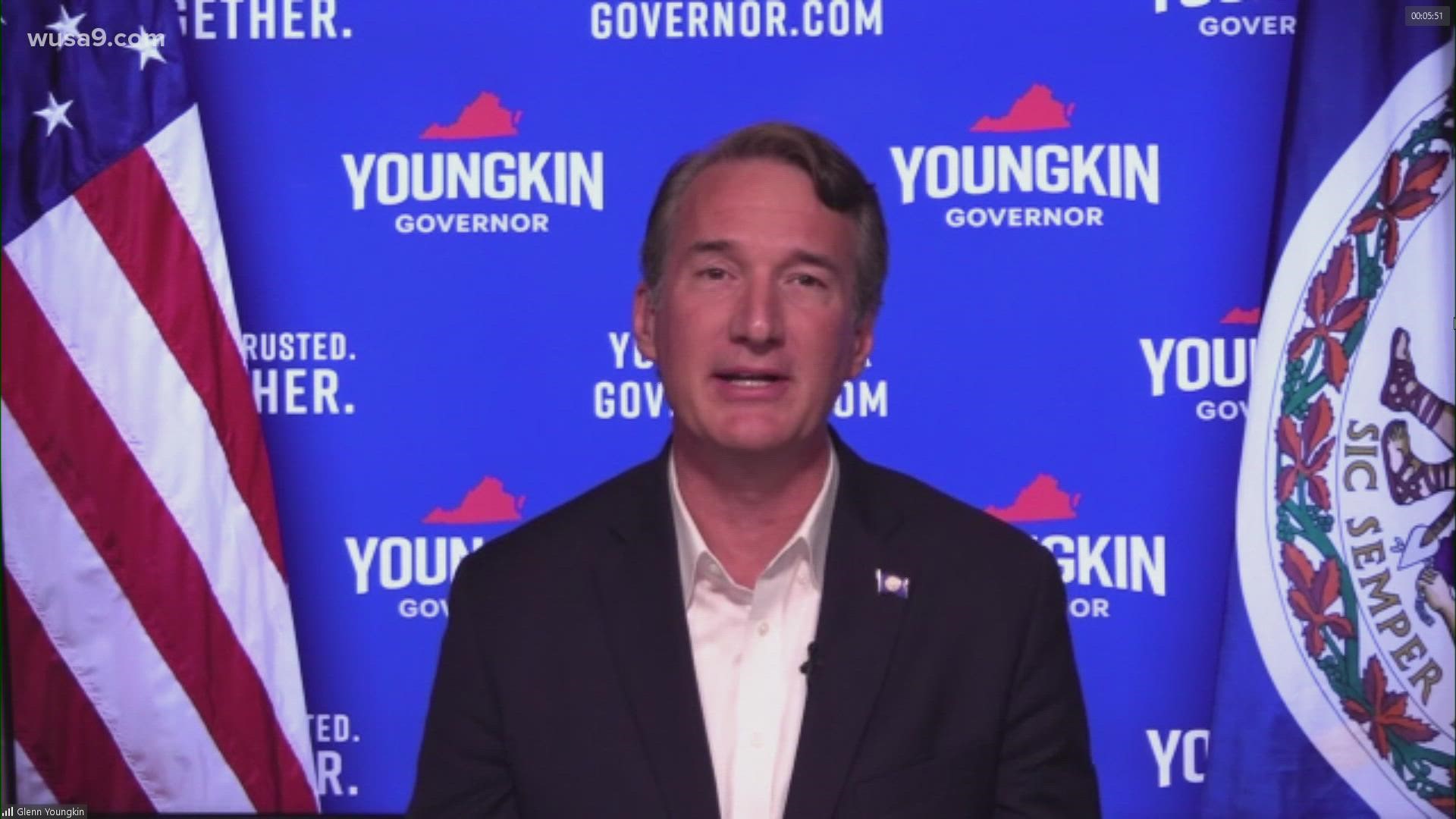 On Wednesday, the two candidates answered more questions about their vision for Virginia in conversation with the Get Up DC team.

Youngkin discussed what he would focus on if he were elected governor, emphasizing cutting taxes, making communities safer and returning schools to a standard of excellence.

"Virginians are ready to choose a different kind of governor, a governor who knows how to get things done," Youngkin said. "I'm a 30-year business guy, Terry McAuliffe is a 40-year-politician. He, in fact is going to tell our kids what to think and I'm going to teach them how to think."

Youngkin alluded to the fact that during Tuesday's debate, McAuliffe parents should not be involved in school board meetings, even has school board meeting protests over preferred gender pronoun policies and critical race theory are gaining national attention.

"This is determined by the state board of education and local school boards," McAuliffe said. "And that's where it should be. These are the people responsible for getting us a quality education, making sure our children are learning the skills to meet the 21st century economy. "

RELATED: 'We shouldn’t be silent' | Crowds of protesters rally against Loudoun County School Board

During the debate, the two clashed on vaccinations. On Tuesday, McAuliffe repeatedly seized on Youngkin’s opposition to mask and vaccine mandates, and Youngkin stumbled briefly when asked by the moderator if he supported measles and mumps vaccines. He eventually said he did.

On Wednesday, Youngkin emphasized that everybody should get the vaccine, but said he would not support a vaccine mandate.

"Terry McAuliffe wants to mandate vaccines because he wants to fire people who have not gotten the vaccine," Youngkin said. "This is not what a governor should be doing. As governor I will do everything in my power to make sure that people understand the real information about the vaccine ... We're going to go to work to get Virginia through this pandemic."

McAuliffe said he is focused on the pandemic and called on parents to demand teachers and staff be vaccinated and wear masks in schools.

"Parents should be telling schools that their teachers need to be vaccinated and that they should be wearing masks," McAuliffe said. He pointed to his opponent's views on vaccinations once again on Wednesday. "We need serious leadership on this," he said.

Early voting has already begun in Virginia. Registered voters have until Saturday, Oct. 30 to vote at early voting locations across the commonwealth.

Election Day is November 2 in the commonwealth.