The cause is still under investigation but staff believes it could have been a radiant heater used to keep the animals warm during cold temperatures. 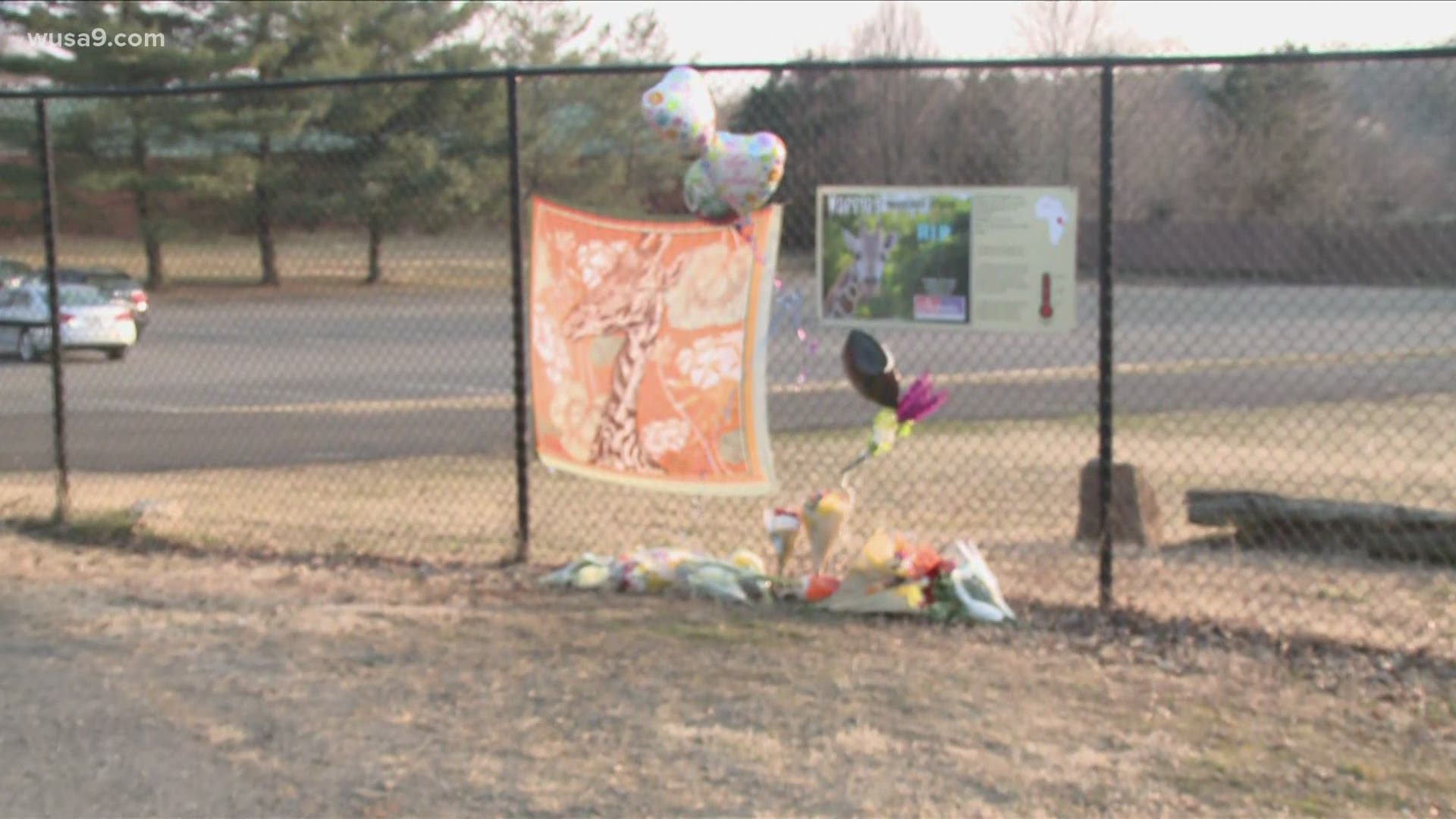 RESTON, Va. — The community of Reston reacted to the loss of two beloved giraffes at Roer's Zoofari by leaving flowers and balloons at the zoo on Tuesday.

Staff at the Fairfax County zoo created a small memorial outside of the entrance, but it has been slowly growing throughout the day as fans of the giraffes expressed their memories of visiting the site.

Fire crews responded to a barn fire at the zoo on Hunter Mill Road before 5:30 p.m. on Monday. A giraffe known as Waffles and a second giraffe died in the fire; the second giraffe was so new to the zoo that he hadn't been named yet.

The exact cause of the fire is still under investigation, but in a statement Monday night, staff at the zoo said they believe the fire came from a radiant heater used to keep the animals warm during cold temperatures overnight.

"I was distraught," resident Camille Headen said. "He was like the sweetest little animal I've ever met in my life."

Headen said recently she'd been visiting Waffles almost every month. Hundreds of people flooded the zoo's social media pages sharing their fond memories of Waffles. The 7-year-old giraffe was known to have a wagging tongue.

"I know what Waffles meant so much to so many people and so many children in our community," owner Vanessa Roer tearfully said. "I know we're grieving together and we'll get through this together."

Roer said she's been in touch with the Zoological Association of America (ZAA), the wildlife management company that accredited them. When WUSA9 asked if there's anything she'll do differently to prevent a similar situation, Roer said, "Absolutely, once we're aware of what the cause was we'll do everything we can to make sure that's not repeated."

Animal welfare groups such as the Animal Wellness Action said while a fire isn't a sign a zoo is delinquent or negligent, it raises concerns about how fit a facility is to take care of exotic animals. He claimed the accreditation group doesn't have nearly as strict guidelines and standards compared to other agencies.

"When you have a barn, there's a risk of fire and there should be protocols to prevent that sort of thing from occurring and putting those animals' lives at risk," AWA President Wayne Pacelle said.

ZAA hasn't responded to WUSA9's questions about its role in assisting the zoo following the fire.

Pacelle questioned why there was no one to be alerted of a fire early on if it happened around 5:30 in the afternoon. Roer responded by saying the incident happened after regular hours.

"We make sure animals are safe and secure and then it's time to go on," Roer explained. "We can monitor from our cameras if we need to."

The United States Department of Agriculture routinely inspects zoos across the country at least once a year. Since Roer took over as owners in March 2016, the USDA has inspected the facility and had one report in 2017 with six issues of non-compliance ranging from lack of shade and ventilation to limited space for certain animals.

The zoo was never specifically cited nor received any other non-compliance issuances within the last four years.

New cell phone video of the barn fire at Roer’s Zoofari that killed two giraffes including the beloved Waffles. It broke out before 5:30 pm on Monday. The site has about 200 animals, many of which have been relocated to other parts of the zoo. @wusa9 pic.twitter.com/3OyxGTNVHt

The zoo has about 200 animals, many of which were relocated to other parts of the zoo. Three exotic birds were transferred to another wildlife exhibit in Leesburg in the meantime.

The zoo hopes to reopen by Friday.