VIDEO: 10-year-old Makiyah Wilson celebrates her birthday, days before being shot and killed

Friends and family of 10 year old Makiya Wilson released balloons from the Clay Terrace courtyard where she was killed Monday. 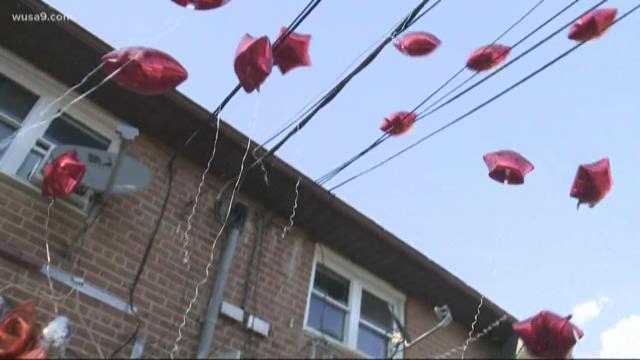 WASHINGTON, DC (WUSA9) -- Makiyah Wilson celebrated turning 10 years old like any soon-to-be 5th grader would: In bright colors with a smile on.

In a video of Wilson's last birthday, she dons an all-pink blouse, with a neon tutu and just-as-bright socks.

Wilson's glee is obvious. She hops from place to place, playfully antagonizing guests at her party with a bright pink water gun, taking breaks by shooting a few sips of the water herself.

Her godmother is holding the phone, recording the video. She says, “Let’s take this so when you get older we can show the world what you looked like.”

That is how the little girl will remain: A bright, beautiful 10-year-old full of life and love.

Makiya was killed when four masked men jumped out of a car Monday and shot into a crowd at Clay Terrace in Northeast DC. The little girl had just stepped out of the house that summer evening, home from the pool about to go to the ice cream truck.

RELATED: ‘They some cowards’ | Mother of 10-year-old killed by masked men wants justice

Members of Wilson's community came together Wednesday night, to honor her life lost too soon.

“That's why everybody loved her because she…,” her mother Donnetta said before breaking down in tears, “this hurts and it will never be OK. Stop telling me it’s going to be OK because it’s never going to be OK.”

“I have an 18 year old who was shot, too, that I don't have no information on to this day,” said Donnetta, “She's 18 and she needs her mom they told her my daughter is dead - not me!”

Family members said that 18-year-old is in a Virginia jail on an unrelated charge. Mom said trouble from school was following her home. The family didn't feel safe. They wanted out.

“I've been to the police since February begging them to get me out of here,” said the mom, “I told them at the police station ‘what you want one of my kids dead?' Well, there you go. You got it. I tried not to fail her but I tried my best to get out of here! She was only 10!”

Family and friends gather to remember their beloved. 10 y/o Makiya Wilson. Gunned down right outside her home @wusa9 pic.twitter.com/FNp2Wb5uwV

It is a pain no parent should ever experience but somehow this family has found strength.

“God don't take us to it to not take us through it,” said Makiya's Uncle Mike D’Angelo. “I know it's not a brick wall, it's a speed bump. We have to slow down, go over it together and try to take something positive out of this.”

“That's why I’m standing here with my head high right now because of my daughter and these people (at the vigil who are supporting family),” said Makiya's father, Mike.

“To the ones that did this: You know what you did and you know it was wrong,” Mike D’Angelo. “You didn’t abide by the code that you signed up for that comes with the streets: No kids, no women. Do the right thing. And for people in general man, take care of your kids, love your family.”

The uncle, Mike D’Angelo, is a rapper who just signed a record deal. He is hosting a charity concert to benefit the family at Pure Lounge at 1326 U Street, NW Sunday 2-7pm. If you would like to help the family now you can support their GoFundMe Page.

A candlelight vigil will be held Saturday on 53rd Street, NE at 7pm. Funeral services will be held Wednesday July 25th from 9am-1pm at Young Memorial Church, 2490 Alabama Avenue SE.

The car that the suspects used to drive to the shooting was located earlier Wednesday.

Anyone with information about this crime is asked to contact MPD at 202-727-9099. Anonymous information can be texted to the police by sending a message to 50411. The Metropolitan Police Department currently offers a reward of up to $25,000 to anyone that provides information which leads to the arrest and conviction of the person or persons responsible for any homicide committed in the District of Columbia.