VERIFY: Should you ask for a 'provisional ballot with a receipt' if you are challenged at the polls?

We can verify, yes, if a poll worker challenges you at a voting station, you can ask for a provisional ballot. 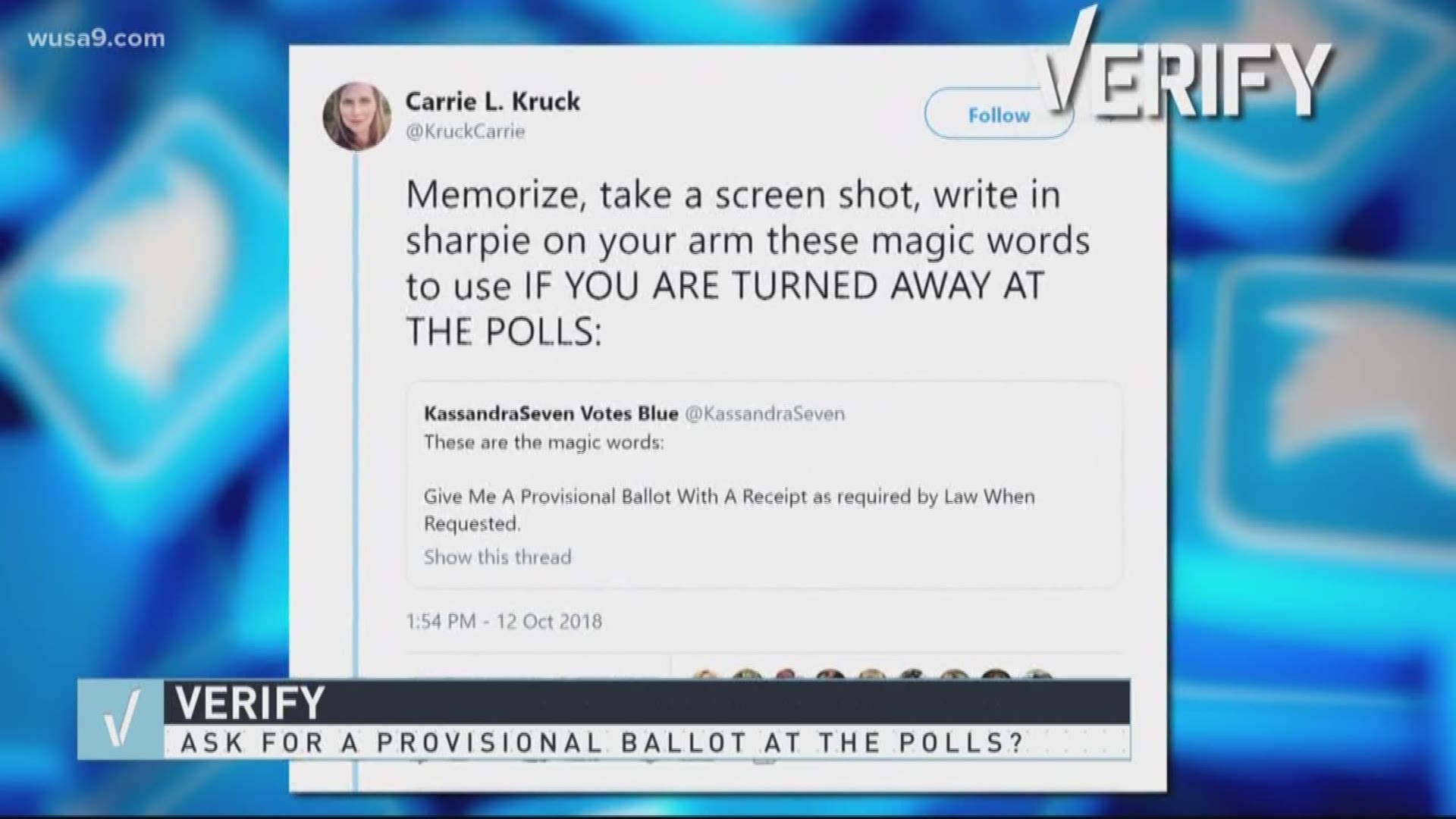 Should you ask for a "provisional ballot with a receipt" if you are challenged at the polls?

D.C. Board of Elections- Voting By Special Ballot

Midterm elections are just three weeks away, and a voting top is already catching fire on Twitter.

Memorize, take a screen shot, write in sharpie on your arm these magic words to use IF YOU ARE TURNED AWAY AT THE POLLS: https://t.co/FsQq5Icfol

So if you're challenged by a poll worker, should you request a provisional ballot?

According to the Help America Vote Act of 2002--you definitely should. Under Section 203- if you are an eligible voter registering in your jurisdiction, you should ask for a provisional ballot even if you're not on the poll book and don't have your ID with you.

"It is true. Provisional ballots are required by federal law if you show up to vote on election day and you're not on the voter rolls, or there's some question about your eligibility to vote, or you don't have the proper ID to vote, you should request a provisional ballot," Sarah Jackel, General Counsel at Vote.org, said. "Your local election official is required to furnish one to cast, as well as a receipt."

The law goes on to say that an official must provide the voter with a receipt of their ballot, which the voter can use to find out whether their vote was counted.

"I think many people don't know that they are entitled to cast a provisional ballot and that [poll workers] are often volunteers and they don't even always know the ins-and-outs and the particularities of state law," Jackel said.

In Maryland, you must prove where you live to your local board of elections before 10 am on the 2nd Wednesday after election day. That's when provisional ballots are reviewed and counted. In D.C. you only have two days following the election to show your ID to the Board. In Virginia, you must show an ID by noon of the third day after the election, Friday, November 9.

Our Researchers also checked with Virginia, Maryland and D.C.: in all three, you can cast a provisional ballot, day of the election, if you are in the correct precinct.

Provisional votes can be rejected for all sorts of reasons, but all three jurisdictions have ways to check if your vote was counted.

So we can Verify, yes, if a poll worker challenges you at a voting station, you can ask for a provisional ballot.

There are some states that DO NOT let you vote provisionally.

NOTE: If you registered correctly and your name is in the poll book, you do not need to show an photo ID in Maryland and D.C. You must show one in Virginia.