VERIFY: No, Freedom of speech doesn't protect legislators from the ramifications of using racial slurs

Md. Delegates are allowed to 'punish a member for disorderly or disrespectful' behavior, per the state constitution 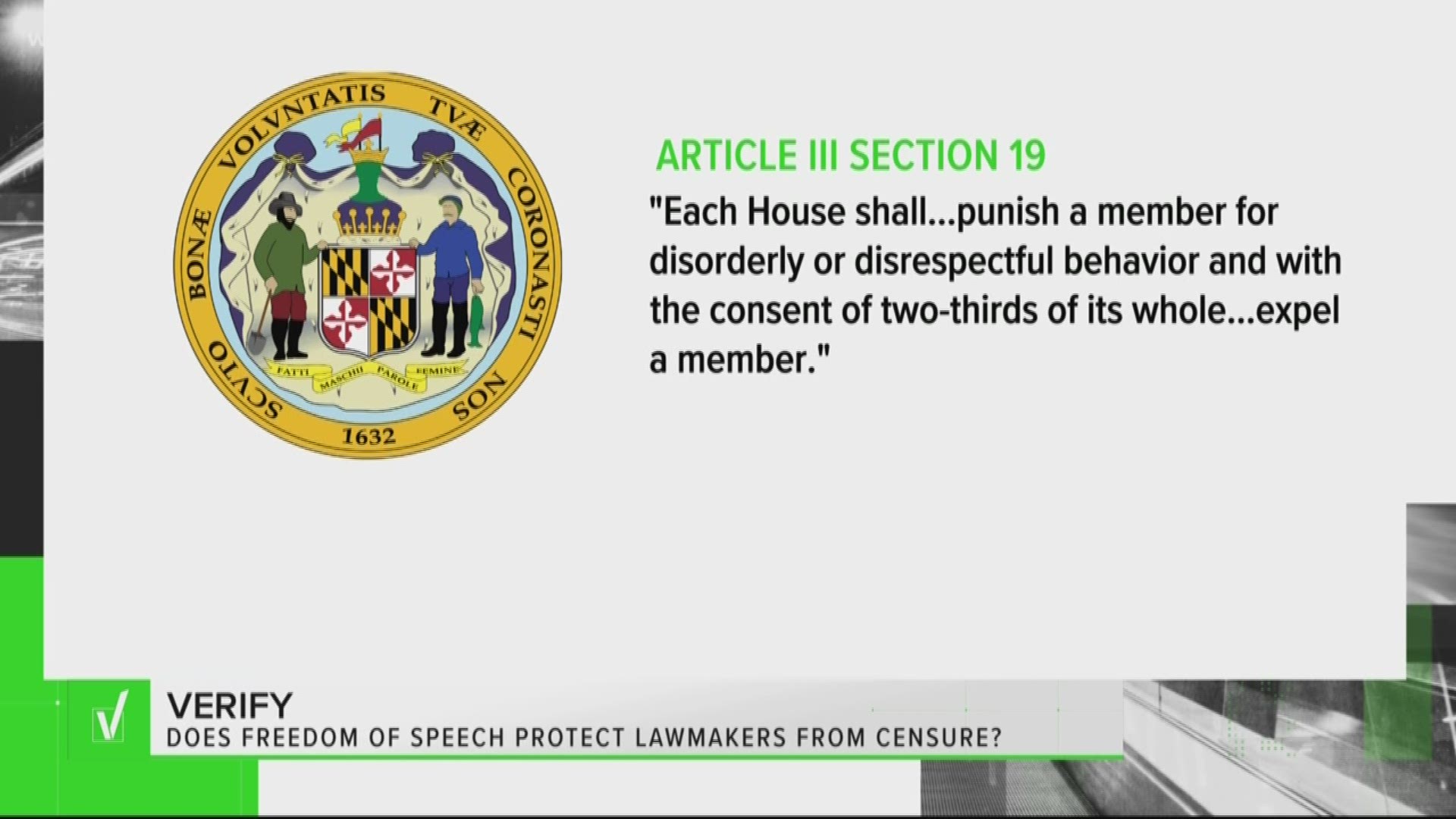 Was Md. Del. Mary Ann Lisante wrongfully reprimanded after using the N-word? Doesn't freedom of speech, per the Maryland constitution, protect her from reproach?

Freedom of speech protects an individual from prosecution not from social repercussions, like calls for resignation from constituents.

It seems like ever day another local politician is in hot water for making racially insensitive stereotypes and slurs.

On May 6, Del. Mary Ann Lisante, representing District 34A in Harford County, returned to Annapolis after a three-day break.

Lisante faced tremendous pressure to resign after she allegedly used the N- word to refer to Prince George's County during an after-hours gathering at an Annapolis cigar bar,WUSA9 reported late February.

The House voted, 136-0, to censure Lisante; she was kicked off the House Economic Matters Committee, as well.

A Verify viewer emailed the team asking whether the democratic lawmaker was wrongfully reprimanded, because of freedom of speech protections.

He asked us to verify: does the constitution protect Lisante from being censured by her peers?

Our researchers combed through the Maryland constitution, and while it does protect speech,that only means Lisante, or anyone else for that matter, can't be prosecuted for something she said. She still, however, can face social repercussions.

Under Article 3 Section 19 of the state's constitution the House of Delegates is allowed to punish members for 'disorderly or disrespectful behavior'. So, they're allowed to decide when to censure a member.

"Disciplinary actions are used by legislatures to respond to both official and private misconduct," the National Conference of State Legislatures writes.  "Typically, however, a chamber will consider private misconduct only when it reflects upon a member’s loyalty or integrity and if it tends to diminish public confidence in the member’s capacities or the legislative institution."

Since the Speaker of the House and President of the Senate appoint members to committees, they can also ask members to leave.

Lisante issued a statement Feb. 26, saying she agreed with Speaker Busch's decision, that she step down from her committee and participate in sensitivity training.

"I understand that this kind of language is not acceptable under any circumstance and I will do everything I can to regain the trust of my constituents and my colleagues," she wrote.

Del. Darryl Barnes, chairman of the Legislative Black Caucus of Maryland, who also represents Prince George's County, is calling his colleagues apologies too little too late.

So we can Verify, she was not wrongfully reprimanded. In this case, Lisante's peers were allowed to censure her.