VERIFY: Is the RNC sending out a fundraising 'Census' with the words 'Official Document?'

Yes, the RNC is sending out a '2019 Congressional District Census' and it has some worried it will be mistaken for the U.S. Census Bureau. 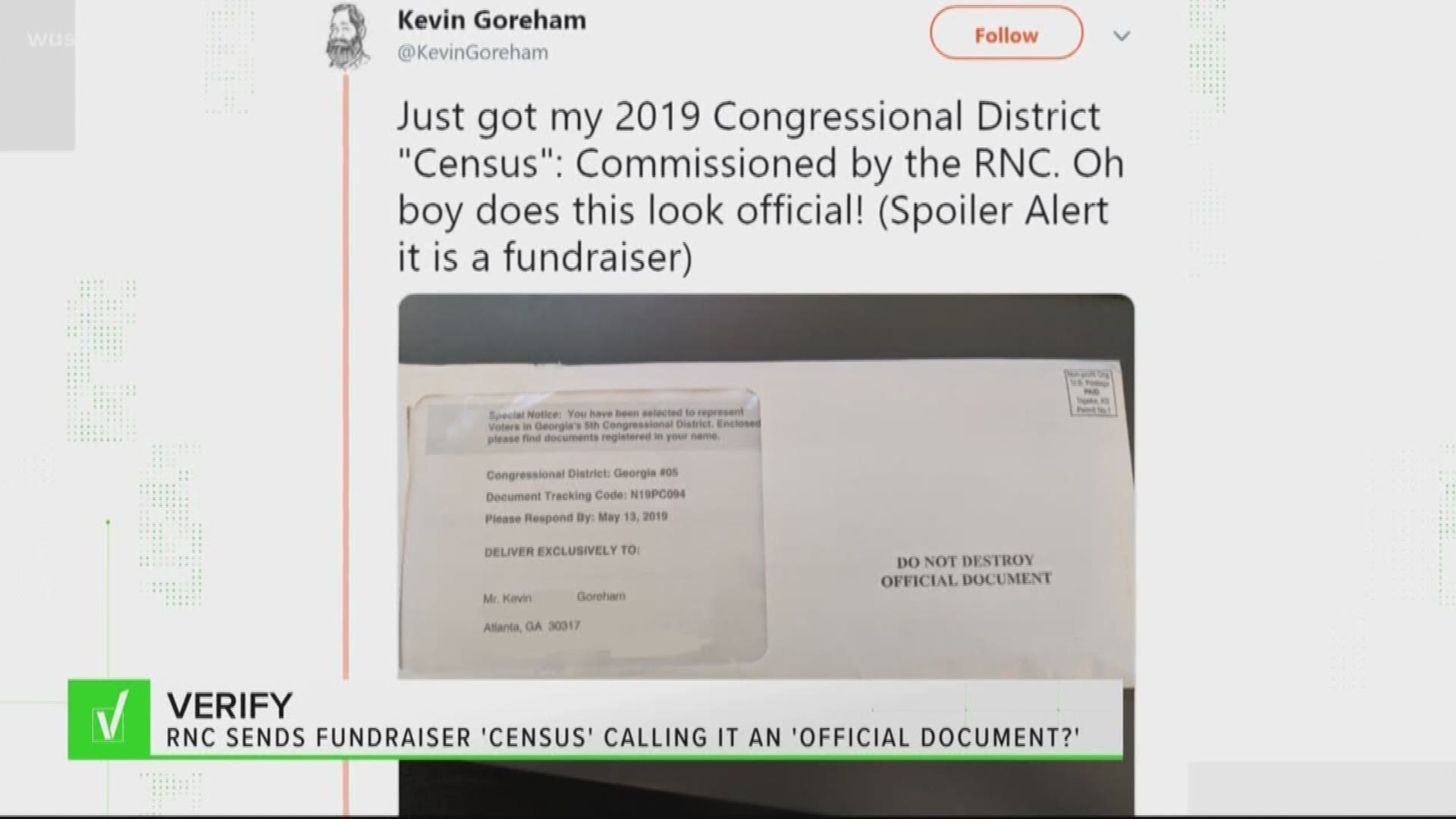 Is the RNC sending out a fundraising 'Census' with the words "Official Document" on it?

Yes, both the RNC and DNC have their own versions. The RNC version is called the "2019 Congressional District Census" and has some worried it will be mistaken for the U.S. Census Bureau.

Some people online are complaining about a fishy letter they got.

The envelope reads "DO NOT DESTROY OFFICIAL DOCUMENT." When you open it up, it says "2019 Congressional District Census."

It claims it is commissioned by the Republican party, and includes several pages with pro-Trump questions and a section to fill out your credit card information.

So is this political parcel really coming from the RNC?

Turns out it is, and they've been doing this for years, according to an RNC spokesperson.

While they said the documents clearly say "paid for by the Republican National Committee," several people online have complained that this could fool elderly people who might think it's an official U.S. Census.

Some of the questions include:

But the RNC isn't the only one using this information research and fundraising tactic -- so is the Democratic National Committee.

"What are the aspects of the Trump presidency that you find most disturbing and want our 2020 nominee to address?" is one of their questions.

The DNC-version, however is labeled as a survey, not a census, and it says "Official Party Business" on the envelope instead of "Official Document."

So we can Verify, yes this letter is from the RNC and it’s a fundraising technique that's been used for some time, and not an official U.S. Census.

Back in 2000 and again in 2009 U.S. Rep. Lacy Clay (D- MO) and Rep. Carolyn Maloney (D-NY) sent a letter to the U.S. Postmaster General claiming that the RNC had violated federal law.

"Under 39 USC 3001, or the Deceptive Mail Prevention and Enforcement Act, it is illegal for an organization to misrepresent a solicitation for donations as an official government mailing," Clay and Maloney wrote.

It is unclear whether either party has been reprimanded under this federal law.