An Uber driver in D.C. refused to transport a blind passenger because she travels with a guide dog. The incident was caught on camera. 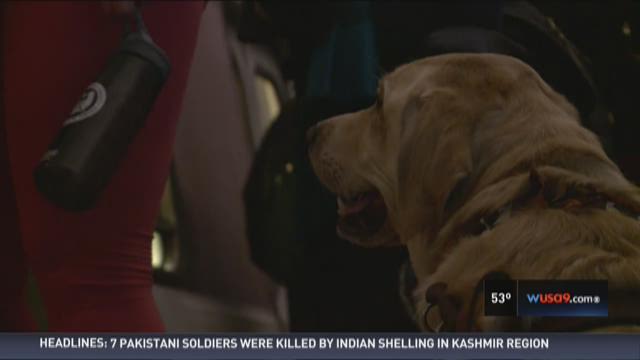 An Uber driver in D.C. refused to transport a blind passenger because she travels with a guide dog. The incident was caught on camera.

In just the last three weeks, Kristin and Zoe have been denied Uber rides in the D.C. area 10 times.

"Obviously you have a remarkable feeling of hurt that goes deep into your gut and streams up to your heart," said Kristin.

A denied Uber ride is just one of many barriers Kristin and Zoe must overcome every day.

WUSA9's No Barriers team followed them as they made their way along busy D.C. streets.

"None of the Metro Access cards that you’re required to have as a disabled person work with the entry and exit points," said Kristin.

So Kristin and Zoe have to stand and wait outside the kiosk for someone to give them access to the train.

"I waited an hour and a half once to get through and ended up going back through and taking a bus to my destination because I couldn’t get through," said Kristin.

WUSA9's No Barriers team was stunned by what happened next, on a short escalator just steps from the platform.

A young woman tried to shove her way past Zoe, nudging the guide dog with her foot.

The woman then cut in front of Kristin and Zoe, racing to board the train.

"People have the wrong perception of what a blind person is," said Kristin. "They don’t think we should be out in the world working or look like sighted people."

WUSA9's No Barriers team waited on the platform for the next train, but there were no audible announcements. Once they got on board, all four handicapped seats were taken. No one offered to give theirs to Kristin, who was able to sit down after the first stop.

"These are the barriers we are trying to overcome and we must overcome" said Kristin.

Uber has suspended that driver’s privileges as it investigates Kristin’s complaint against him. The company does acknowledge that refusing to transport a service dog is both a clear violation of the law and of Uber policy. As for the driver’s claim that he’s allergic to dogs, it still does not exempt him from accepting a service dog.