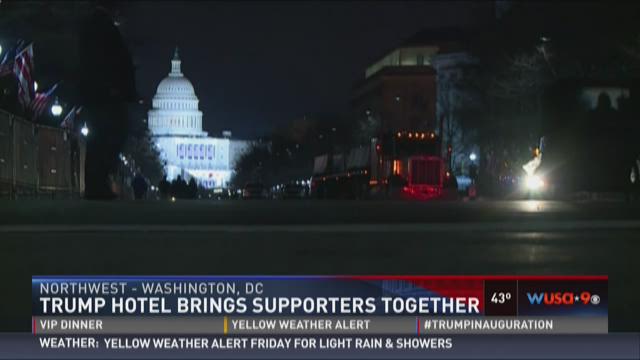 Just a few blocks away from Anti-Trump protests, Donald Trump supporters gathered at the Trump Hotel on the night before the president-elect will be sworn into office.

The Trump hotel drew them together, with its own certain form of gravity.

Jason Harriston and his friends flew to D.C. all the way from Northern California.

Bob only drove here from Rhode Island, but after experiencing a continental shift in viewpoint.

"I’m a big Democrat and I voted for trump," said Bob. "Everybody in my family voted for Trump. Because we’re tired of the way things were going."

As WUSA9 walked the parade route towards the Capitol we met Trump supporters as they met each other – and marveled at their unexpected and unlikely place in this moment in history.

Chris Gibson’s family from Missouri stopped in the middle of the street to talk with a family from Ohio. Strangers only for a moment.

"I’m a strong, Christian woman and I feel like God’s hand is on this man and brought him to this White House and nothing can stop that," said Gibson.

The people we met all knew about the protests a few blocks away. And on Democratic D.C.’s streets, most remained in their political silos, talking amongst themselves – not to others with different points of view.

Can the new president change the country’s divided dynamic? Perhaps in time, we heard.

"You’ve gotta give him a chance. No one has given him a chance yet." said Jason Harrison, a Trump supporter.

Using Metro during the Inauguration