Timeshare owners across the U.S. are targeted by business. 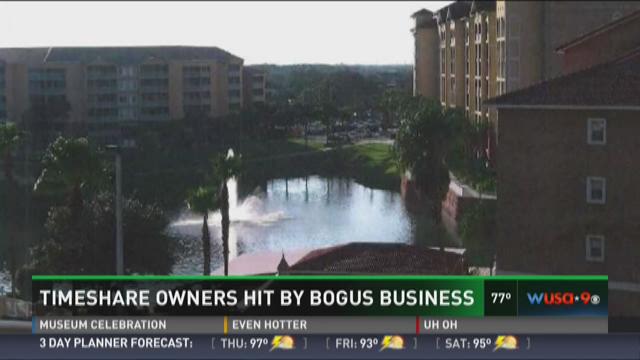 "I won a trip, so I asked a girlfriend to go with me," Sheridan Hill said.

Hill has a passion for travel. In December 2014, she even flew to Florida to sit through a timeshare pitch just to get a free trip.

Sheridan thought she'd have a place to getaway and make a little money, too. One year later, she was thrilled when the Resort Property Management company or RPM, called to assure her they had clients to rent her timeshare.

Anchor and consumer correspondent Lesli Foster said, "The thing that roped you in was the promise of money."

"Exactly," Sheridan said. "Of course, that would have been six-thousand something dollars."

Sheridan agreed to pay nearly $800 for the ad fees. But, when she checked the website, she only saw an advertisement for the resort property and not her specific timeshare.

The Atlanta-based company promised she would get her money, minus the remaining ad costs in 90 days.

"Never heard from them," Sheridan said.

She isn't the only one who shelled out money for that advertising fee.

The BBB's Kelsey Owen said nearly a third of them came from timeshare owners in D.C., Maryland, Virginia and Pennsylvania.

"RPM is actually calling and they're saying that they're affiliated with your timeshare company or the resort that you have a timeshare through," Owen said.

When asked what the likelihood of people, like Sheridan, will ever get their money back.

"Unfortunately, it is unlikely," Owen said.

Sheridan hoped by sharing her story, it will help other timeshare owners avoid the hard lessons she's had to learn.

"If I'm the last one they got, maybe they won't get anybody else," she said.

Resort Property Management has an "F" rating from the Better Business Bureau. The non-profit says the company has repeatedly refused to respond to its inquiries and letters.

They did not respond to our email, either, and when we called RPM the automated message said "the number you've dialed is temporarily unavailable."

The BBB advised timeshare owners to take the following steps to protect themselves.

Don't agree to anything on the phone or online until you've had a chance to check out the company or reseller.

Contact the Better Business Bureau, State Attorney General and the local consumer protection agencies in the state where the reseller or company is located. Ask if any complaints are on file. Check with your timeshare company or resort to see if the reseller is someone they are affiliated with.

Ask the salesperson for all the information in writing.

Ask if the reseller's agents are licensed to sell or rent real estate where your timeshare is located. If so, verify it with the state Real Estate Commission. Deal only with licensed real estate brokers and agents and ask for references from satisfied clients.

As how the reseller will advertise and promote the timeshare unit. Will you get progress reports? How often?

Ask about fees and timing. It's preferable to do business with a reseller that takes its fee after the timeshare is sold. If you must pay a fee in advance, ask about refunds. Get refund policies and promises in writing.

Don't assume you'll recoup your purchase price for your timeshare, especially if you've owned it for less than five years and the location is less than well-known.