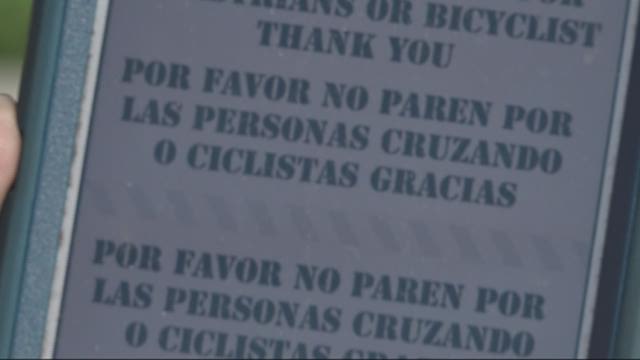 This might sound a little strange, but a Sterling, Va. man is so concerned about cyclists, he's making his own street signs to say, “Please do not stop for pedestrians or bicyclists …“

Did we mention the signs will be in English and Spanish?

The Loudoun County contractor says they’re going up first thing Saturday at the W&OD Bike Trail and that he’s not crazy, he’s upset!

"We're just lucky we haven't had a fatality yet,” Johnson told WUSA9 at the busy intersection. He says he decided to make the signs after a witnessing a near fatal accident on Friday night.

For the Sterling resident, part of the problem are stop signs located on the bike trail. They’re not for Sterling Blvd. The Blvd. does have yellow signs to warn drivers about activity, but there’s nothing that tells you, you have to stop.

Johnson says this is what almost caused that near fatal he witnessed last Friday. He said one vehicle did decide to stop on the right lane of the Blvd. They gave two cyclist the right of way. However, a car traveling in the same direction in the next lane wasn’t slowing down and almost plowed right though the two cyclists. Johnson says he saw this in his rearview mirror and started slamming on his horn.

“He would’ve wiped them both out and dragged them through Sterling Blvd.,” said Johnson.

Johnson says he got kicked off of a community Facebook page for posting his idea. After all, it may not be legal. He also had a fan out on the trail on Wednesday.

"I'm just going to wave them through because I can't see what that second lane is doing a lot of the times,” said a cyclist.

VDOT said they or the parks department will most likely have to take the signs down. The Loudoun County Sheriff's Office told us the same, but did also say, "he’s got a point.”

Police and the county say there and another trail intersection are known for "near-fatals" and rear-end accidents. That’s why the county says they’re working on putting flashing lights at the Sterling Blvd. intersection. This is expected to happen sooner than later.

WUSA9 also learned the approved long-term plan for that area will include a bridge overpass around the year 2021.

It’s all good news for Johnson, but he’s still not willing to wait and says rain or shine, you’ll see him Saturday.

A VDOT Spokesperson told WUSA9, even if they do remove the signs, they will take another look to see if maybe different signage can better the intersection until the flashing lights are complete.