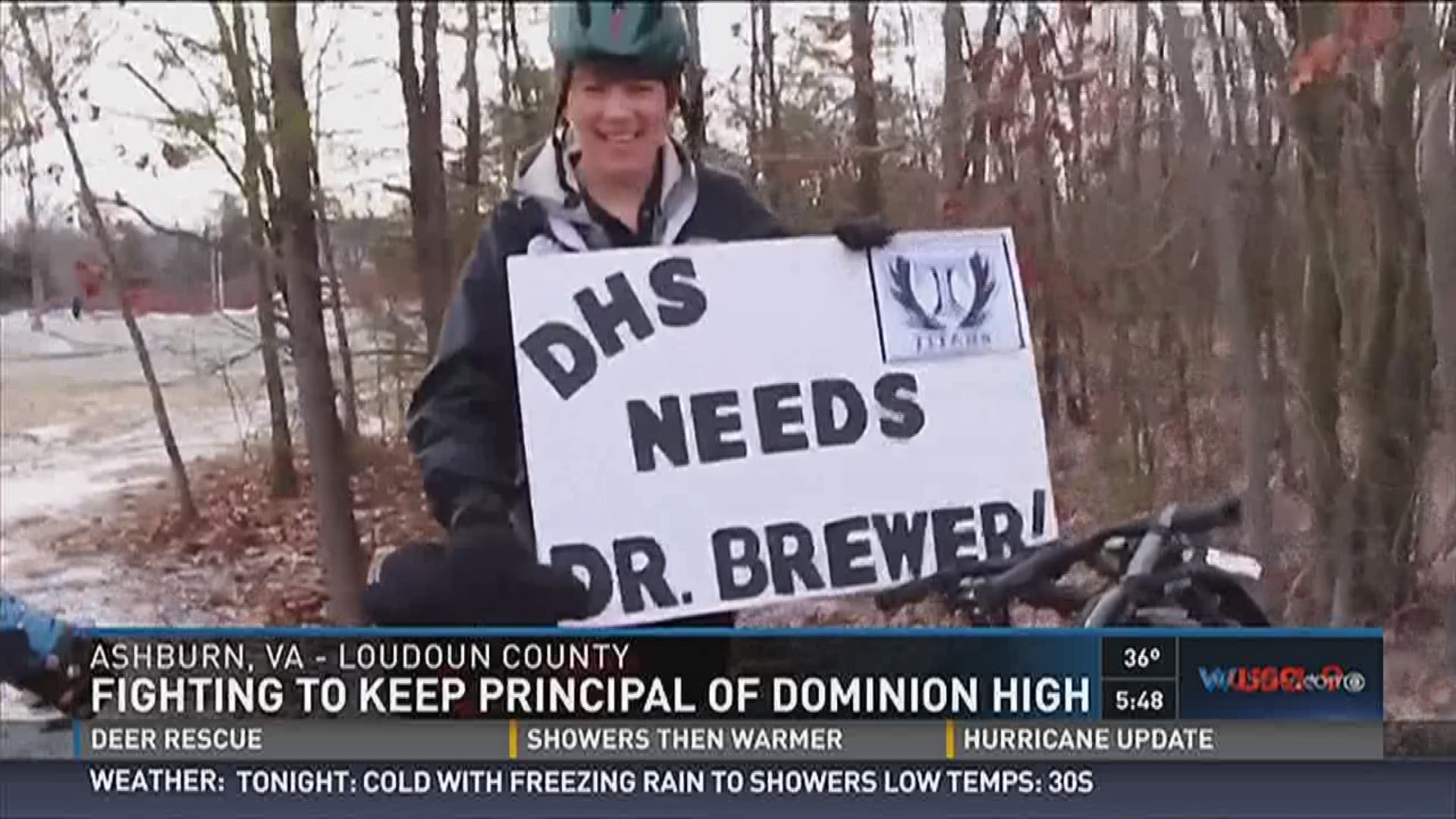 The crowd of more than 800 spilled out into the cold night. Inside the Loudoun County Public School building, nearly each of the 600-plus people seated in the school board auditorium waved small rectangular signs that said "Bring Back Brewer" whenever a speaker said the name John Brewer.

About 200 people signed up to speak at the meeting and most were singing the praises of Dr. Brewer.

Brewer has been the principal at Loudoun's Dominion High School since it opened in 2003. He was abruptly put on leave in December and recently given a notice of termination.

"Absolutely disbelief that he could've done anything wrong," said Duffy Newman, a parent of two current Dominion students and one graduate.

Loudoun Superintendent Eric Williams apparently made the decision to terminate Brewer after a newspaper reported that former Dominion band director Brian Damron resigned from his new job in Florida after allegedly making sexual advances toward a male student. He also allegedly boasted about having relationship with a former Dominion student who had graduated.

Brewer had written a letter of recommendation for the band director and parents believe he's being targeted for that.

They say they've done their own investigation and "can't find anything where he's broken a law, he hasn't followed a policy, or he said anything that's insubordinate," said Dominion parent Jackie Funk.

The parents say Dominion, a diverse school of 1,500 student with 28% economically disadvantaged and 16% English Learners, needs Brewer. They say Brewer is the reason the school has seen no student suicides because his unique, engaging leadership style ensures each student feels valued.

From day one, Brewer has organized a Welcome Wagon every summer where he personally goes out with a team to each of the homes of the approximately 400 new students and meets them.

"Every year, without fail because he cares," and strives to help every student achieve said Curran.

Brewer also puts every student in a clubhouse, a small diverse group of students who get together every school day. The message Brewer drives home to his students is to lead a "life of significance."

Brewer was named the LCPS's Citizen of the Year in 2008 and Principal of the year in 2010.

Brewer is appealing his termination and the parents have already raised $19,000 for his legal funds to fight the decision before an independent hearing. More than 2,500 have signed a change.org petition in support of keeping Brewer as Dominion principal.

The LCPS School Board will have the final say.