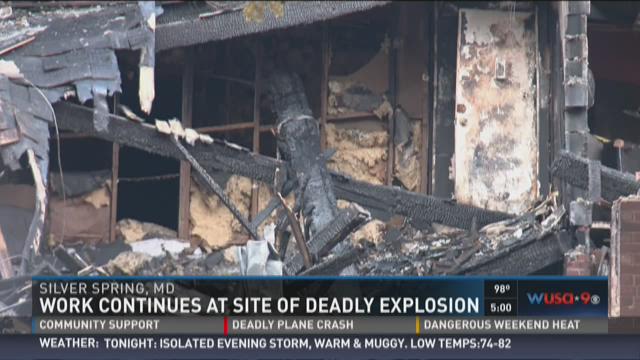 Meanwhile, a relative of a couple who went missing in a catastrophic explosion Wednesday night says her family members have been asked for DNA samples, as authorities anticipate trying to identify human remains as they are uncovered.

“We’ve just been waiting. They told us we’ll have to be patient,” said Melba Quezada who’s aunt and uncle are believed to be missing after the explosion.

Authorities reported Friday that they have uncovered three sets of unrecognizable human remains and an unknown number of people are missing.

Independently, WUSA9 has determined at least five people are missing, including two children, based on interviews with families.

At least, 110 people were in the building when it exploded and burned, authorities reported Friday.

Investigators have not determined a cause for the catastrophic explosion. Montgomery County detectives are being assisted by investigators from the federal Bureau of Alcohol, Tobacco, Firearms and Explosives.

Investigators are looking into 9-1-1 records indicating a call for the odor of gas from the area on July 26th.

Other residents of the complex say they have smelled gas in the area.

“We reported it and nothing happened,” complained Melissa Velasquez who said she called property managers approximately two weeks ago. “I’m afraid to live here now.”