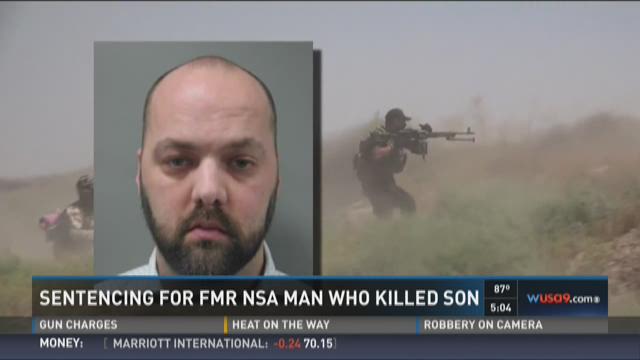 With parole and time served, he could be out in about four years.

O’Callaghan admitted he hurled Madoc Hyunsu O’Callaghan across the room. Prosecutors said he beat him repeatedly, in the head and in the scrotum.

They’d dropped a murder charge after O’Callaghan agreed to plead guilty to child abuse resulting in death. The maximum for that one count is 40 years, but O’Callaghan’s lawyer, Steven McCool, argued that Post Traumatic Stress Disorder had left him incapable of controlling his rage.

The Iraq War veteran served in the first days of the Iraq invasion, helped rescue Private Jessica Lynch, and served as a translator in combat. Friends said he came back “a damaged man.”

Co-workers from the NSA testified, one after the other, telling the judge O’Callaghan suffered from PTSD.

In tears, one said something must have “snapped” when O’Callaghan beat Hyunsu to death. The medical examiner found Hyunsu suffered from “multiple impacts to the head.”

A defense expert testified that the Marine Corps vet had to be heavily medicated and had contemplated suicide.

Neuro-psychiatrist Richard Restak said “explosiveness” and “irritability” would have made him “frustration intolerant.” He added that he never would have recommended O’Callaghan adopt a young, special needs child.

Advocates for Hyunsu said if O’Callaghan suffered from PTSD, Catholic Charities should never have let him adopt the boy.

The advocates said this kind of abuse happens too often and that they wanted O’Callaghan to face the maximum to send a message that the judicial system will not tolerate it.

“And someone needs to be held accountable,” Yi said. “And there needs to be changes within the adoption system.”

In court documents, O’Callaghan admitted he lied to the adoption agency, telling Catholic Charities he did not have any mental disabilities. He even stopped taking the potent psychotropic drugs he’d been prescribed so he could pass a blood test.