Police say those who were arrested set fires and assaulted police officers. 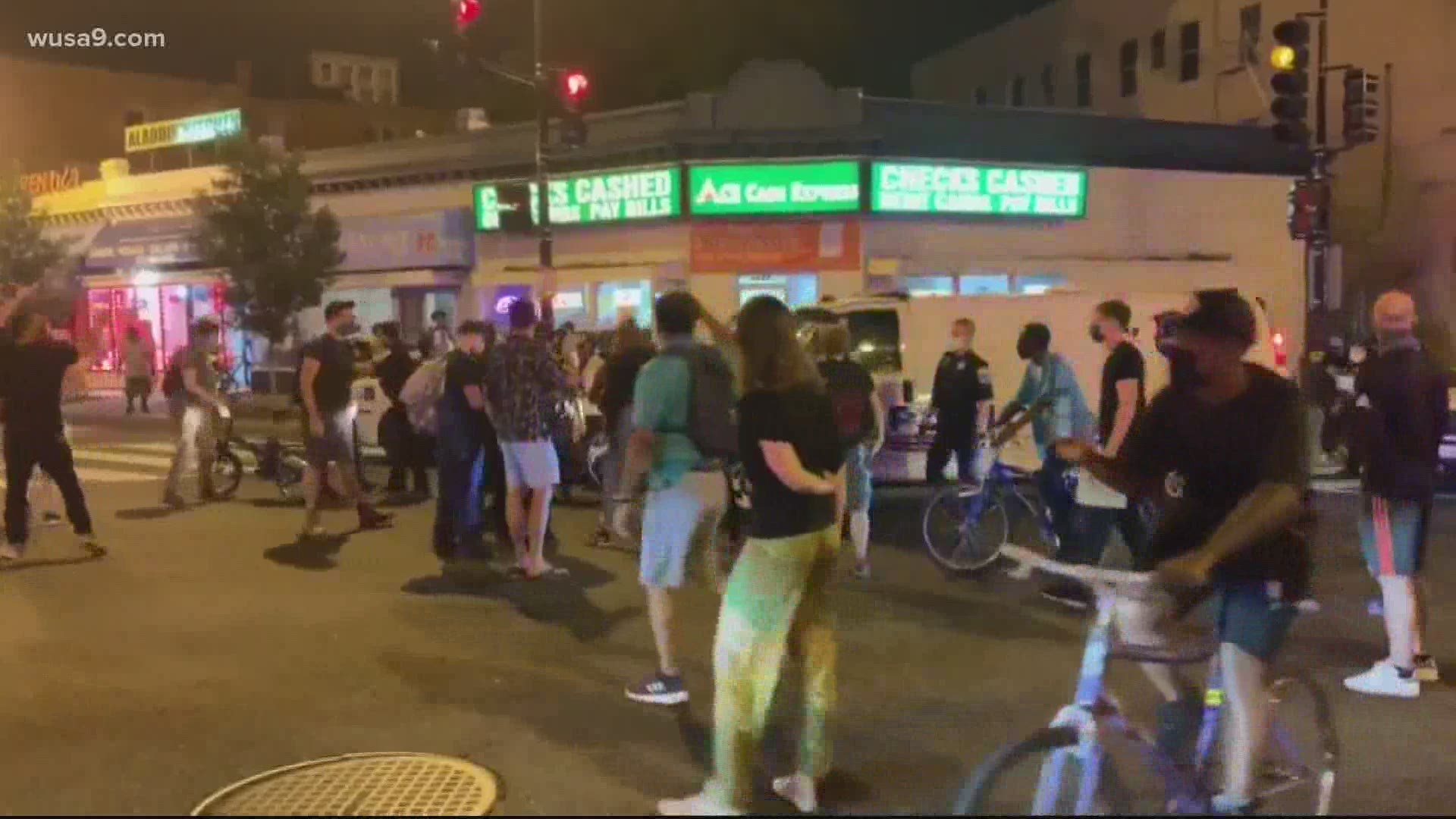 WASHINGTON — Police arrested 42 individuals involved in a large protest in the area of Adams Morgan on Thursday night into Friday morning.

The protesters were in the area of 18th Street and Florida Avenue in Northwest around 10 p.m. chanting, "defund the police," on the streets and near the Metropolitan Police Department's Third District Precinct.

Police said the arrested individuals intentionally set fires and destroyed property. They were charged with felony rioting and assault on police officers.

The demonstration started as a march before it made its way into the Adams Morgan neighborhood.

D.C. police officers were at the scene monitoring the protests. Officers held a line at the intersection of Florida Avenue and 18th Street.

We facilitate daily peaceful demonstrations in DC. Overnight, intentional fires were set & property destroyed. When this occurs, our members have a responsibility to take action.

At this time, 41 individuals were arrested for Felony Rioting & Assault on Police Officer offenses. pic.twitter.com/GbpWxYMjXm

WUSA9 crews at the location noticed that things got heated between the group and police officers. Officers were seen boxing in some protesters and pushing them off to a small area on the street.

WUSA9 also saw police make some arrests. One arrested protester was heard banging on the walls of a D.C. Police van. Protesters were then heard chanting, "let them go."

A confrontation happens between police and protesters after a MPD van tries to leave with what can be heard an arrested protester banging on the van walls. @wusa9 #DC #DCprotests pic.twitter.com/WVKYiCp6BZ

An individual told WUSA9 that a protester had a stroke during demonstrations and was transported away from the scene in an ambulance, but WUSA9 has not been able to confirm the reason for the transport.

According to people down at the protest a protester had a stroke, still waiting on confirmation from @dcfireems. Person was loaded into an ambulance and taken away. @wusa9 #DC #DCprotests pic.twitter.com/fWRn4yDQIh

The protesters included members of the Occupy D.C. group. They said officers peppered sprayed some individuals before making arrests Thursday night. The group said they will continue this "fight" on Friday.

Tonight while protesting one of our members, NBRHÜD, was pepper sprayed. Another of our peaceful protesters was arrested along with around 40 others. We will not take this sitting down, the fire for this fight will not be doused. Be prepared for tomorrow! #OccupyDc #nevernewsham pic.twitter.com/6FG1Le0mxt

The overnight event comes in the wake of protests in the District calling for racial justice and equality that in recent weeks have not been as widespread.