The group is taking its 'defund the police' message to city leaders. 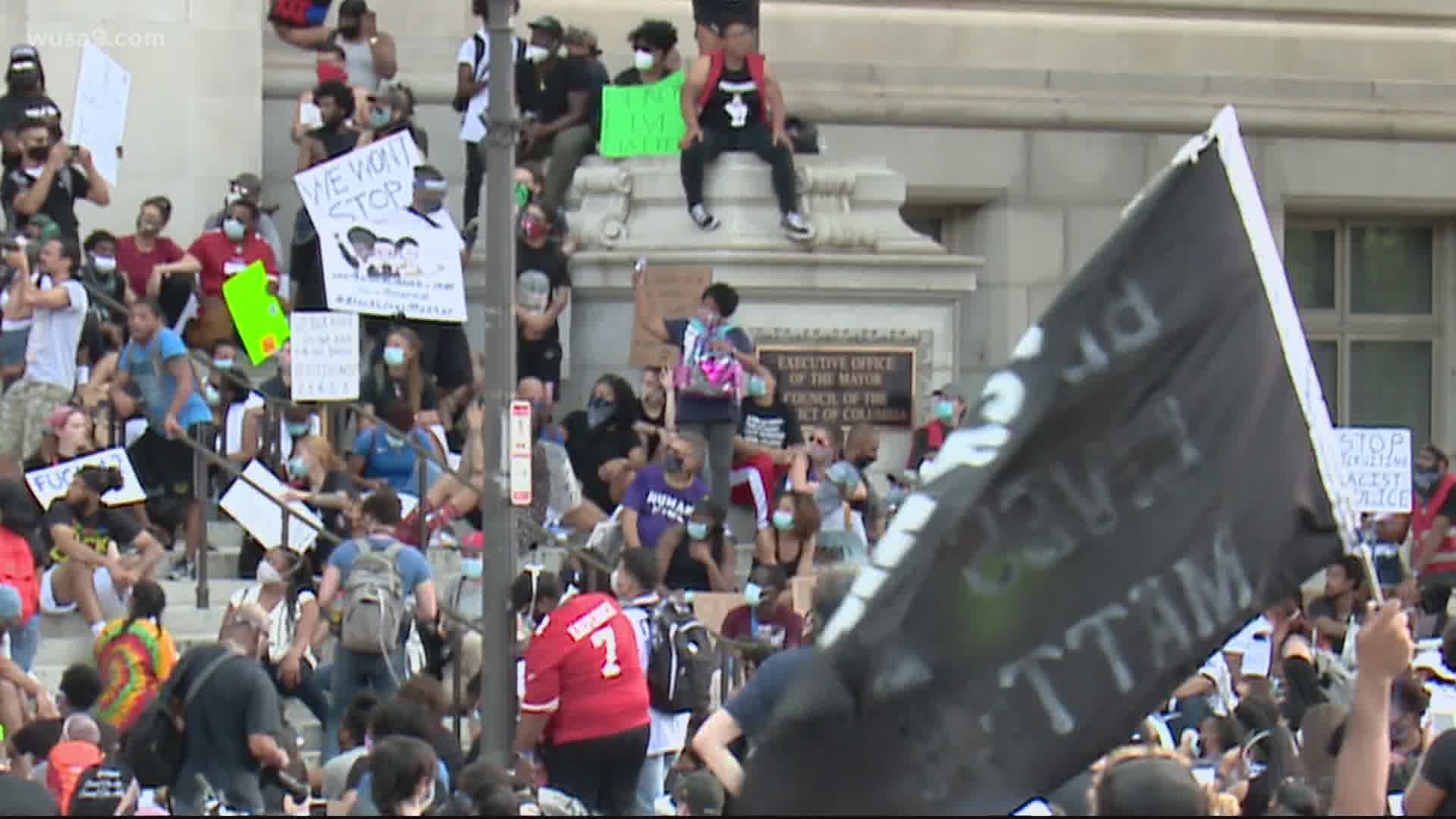 WASHINGTON — On the heels of the largest crowds yet flooding D.C. for the George Floyd protests, one local group is looking ahead to its next steps.

Freedom Fighters DC was formed amidst the protests and pandemic by a group of seven young people -- 90% "beautiful, amazing, talented strong black women" -- according to co-founder Jacqueline LaBayne.

After taking to the streets for two weeks, now they're demanding action from government leaders.

"We going to be out here boots on the ground every day," Zeus X, another co-founder, said Saturday. "By any means necessary, we going to get what we want."

The group plans to take their list of demands to decision makers.

“It’s not only the protests -- it’s board rooms, it’s city council meetings, it’s school board meetings," LaBayne said. "It’s making sure that people are in positions to be treated equally and equitably."

Their major push now is to defund the police -- a rally cry multiple other organizations have been echoing the last few days.

To them, that means dismantling the department entirely and reinvesting that money in community policing and other programs.

In the coming weeks, they plan to share their ideas with council members and are requesting a meeting with D.C. Mayor Muriel Bowser.

"We really believe that redistributing that funding and putting it toward education, healthcare, mental health services…we really won’t even need the police presence we have today at all," LaBayne said.

In the meantime, she said they plan to give back to the community for whom they've been standing up, with outreach initiatives like voter registration.

“We want to really make sure those underserved communities have those resources available," LaBayne said.

RELATED: Protesters are demanding police reform, and local lawmakers may give it to them

In the near future, they're working on an event to celebrate Juneteenth, the day Americans commemorate the end of slavery, which she said will involve black-owned businesses.

“The work is just starting, so get ready," she said.

Freedom Fighters DC issued a list of the following demands:

We demand that the appropriate capable officials in D.C. immediately vote to defund and demilitarize the Metropolitan Police Department (MPD).

We demand food and housing security for all persons in the DMV area.

We demand that no new jails are built in D.C.

We demand an immediate end to the use of Stop and Frisk, a violent policing tactic that is disproportionately targeted against Black people here in D.C.

We demand the immediate abolition of Metro Transit Police (MTP).

We demand the immediate end to the criminalization of protestors. This calls for an end to curfew here in DC

We demand investment by D.C. government into non-police, non-punitive violence prevention services and mental health care in our communities.

We demand all police presence to be out of D.C. public schools and for all D.C. universities to cut their ties with MPD.

We demand that a full and independent investigation be conducted into law enforcement actions on Swann Street NW on the night of June 1, 2020, with full public transparency.

RELATED: Praying in protest: Preachers lead crowds in worship at the White House