Did police violate protesters' rights when they pushed away from Andrew Jackson statue? #TheQandA

Our QandA team spoke with DC Councilmembers and a legal expert to get you answers about what happened Monday night in Lafayette Park. 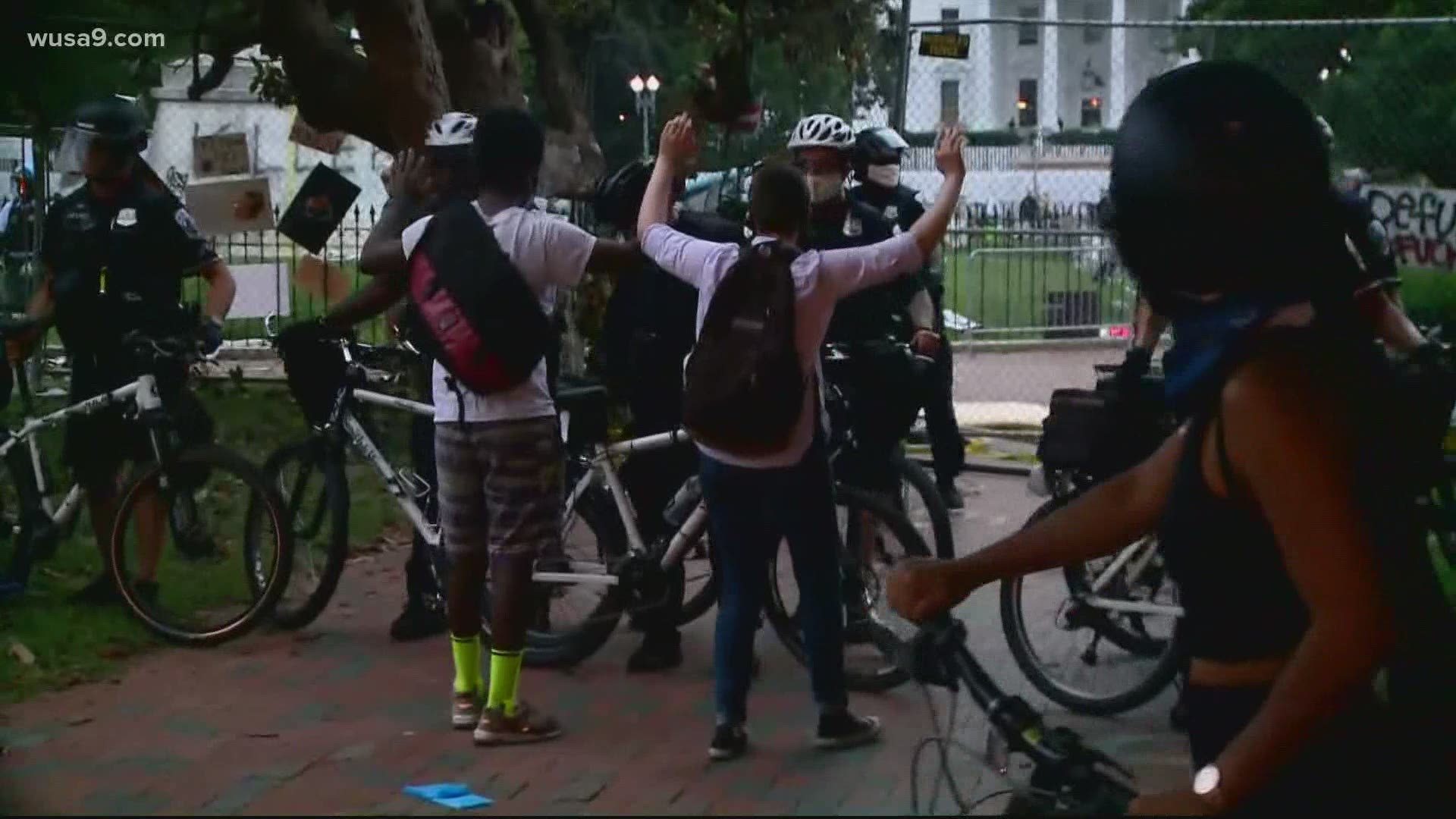 WASHINGTON — Demonstrators tried to tear down the Andrew Jackson statue in Lafayette Park Monday, but were pushed out by US Park Police and DC Police.

Both departments confirmed they deployed pepper spray on protesters to remove them from the area.

The Q and A team spoke with law professor and CBS Legal Analyst Kimberly Wehle to discuss whether or not police violated protesters' First Amendment rights by pushing them out of the park.

“When you’re talking about pulling down giant stone statues, then you’re crossing into territory where people could get injured," Wehle said. "And on the other hand, you’re of course talking about damaging public property. Even though some would say for good reason, that would be vandalism, so there is justifiable reason for police to interfere with that kind of activity that crosses outside of protected first amendment actions.”

The tactics police used to push people out of the park also raised questions.

The U.S. Park Police sent WUSA 9 the following statement about their actions Monday:

"The USPP used pepper spray to create space around the statue and establish a buffer. The USPP was protecting life and property by not allowing the toppling of the Jackson Statue. Lafayette Square is closed."

"Yesterday evening, at the request of US Park Police, MPD assisted in the area of Lafayette Park regarding a large group that was attempting to deface and destroy property. In an attempt to stop the group of individuals, MPD deployed pepper spray. MPD subsequently stopped the individuals who were attempting to pull down a statue in that area. MPD will always protect the rights of those engaged in peaceful First Amendment assemblies, however, those who engage in criminal behavior will be held accountable.

Yesterday, at approximately 2:24 pm, the Metropolitan Police Department and the city’s encampment response team responded to the area of 16th and H Street, NW, to assist in the removal of tents obstructing the roadway that were causing a public safety hazard. MPD gave three warnings over a loudspeaker to remove any belongings in the street, which would be subject to removal. While the property was being removed, some individuals began assaulting MPD officers by throwing objects and attempting to take MPD bicycles. Four MPD officers were injured as a result of this assault and two individuals were apprehended and charged with Assaulting a Police Officer.

Under the existing and proposed legislation, MPD members in riot gear shall be deployed on First Amendment assemblies when there is a danger of violence. The use of a chemical irritant is reasonable and necessary to protect officers or others from physical harm or to arrest actively resisting subjects and may be used during a First Amendment assembly when assembly participants are committing acts of public disobedience endangering public safety and security."

He said last night was just one example of what he and the rest of the council hope to change in police-community reactions moving forward.

“When we’re talking about peaceful protests, I don’t want to see chemical irritants used period," Councilmember Allen said. "This legislation is a lot bigger than protests. This piece of legislation is looking at community trust and police interactions that happen off the camera really in the day to do when we know there’s so much work that needs to be done.”

“I think it’s important to ask why things occurred the way that they did yesterday and whether there were things that could have been done differently," Councilmember McDuffie said. "What we can’t lose sight of is the responsibility of the police department to protect and serve the public, emphasis on protect.”

Councilmember Breanne Nadeau took her request a step further, directly calling on Mayor Muriel Bowser to sign the emergency legislation, so it can be put into effect.

WUSA 9 reached out to Mayor Bowser for comment on Monday's events, but did not hear back.

Councilmember Allen said he wants to start a commission to decide which statues should be removed--with community input--and what should be put up in their place.