'Why would you do this? Don’t you have children?' | 15th and Swann resident shares exclusive video

For the last 8 days WUSA9 has been talking to residents in Logan Circle, MPD officials and protesters about the incident on 15th and Swann St on June 1. 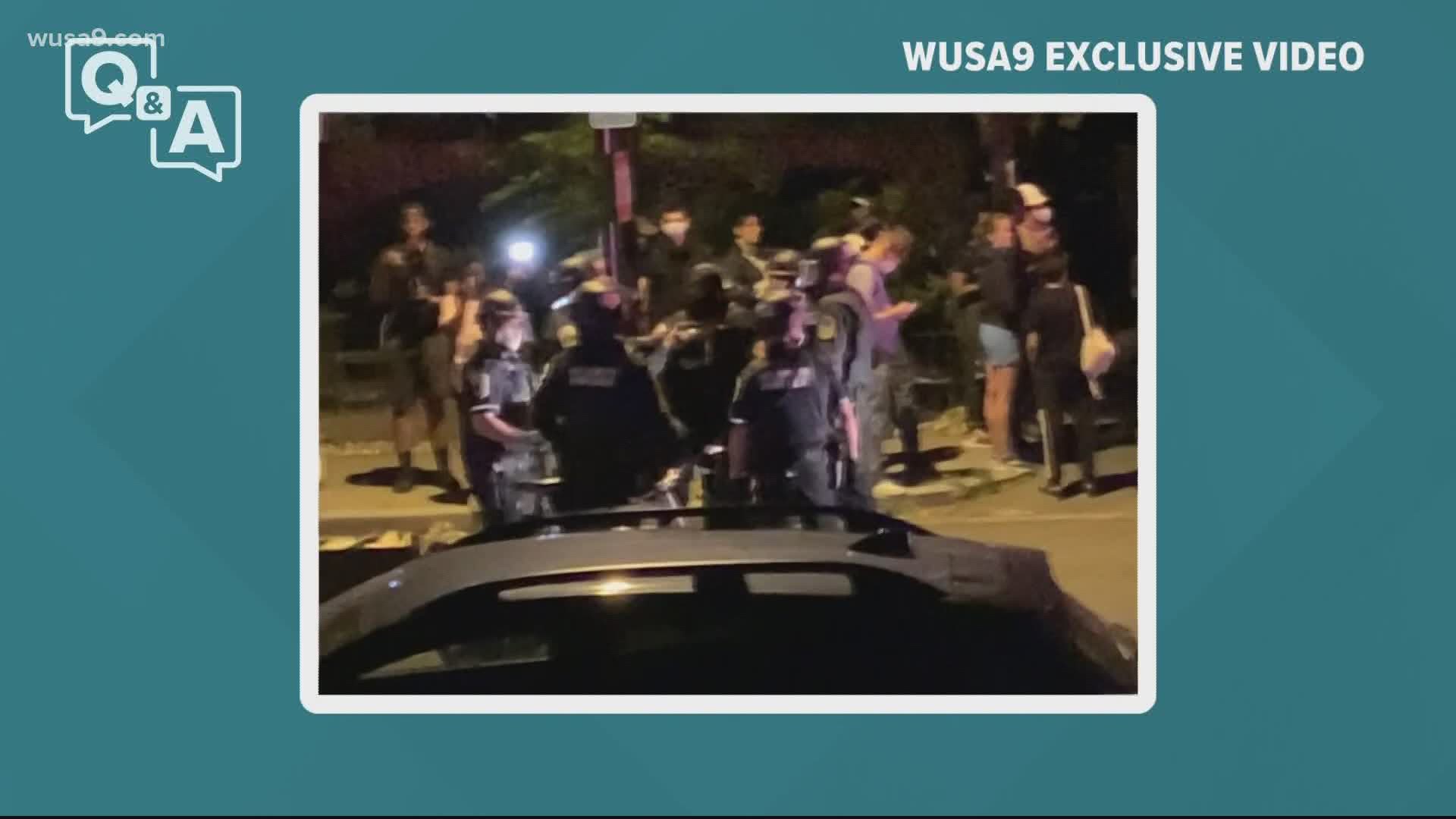 WASHINGTON — The first-hand accounts told to WUSA9 about the incident on 15th and Swann St NW on June 1 have been conflicting. Neighbors have described the protesters as peaceful, but reports from MPD Chief Peter Newsham during a press conference told a different story. He said that pepper spray and pepper bullets were deployed to control the group.

"Believing that there were burglaries occurring and that residences were being entered, the police did deploy pepper spray," Newsham said. "The specifics of that pepper spray deployment will be investigated very thoroughly by our internal affairs bureau."

WUSA9 has requested body camera footage from police that night, but that has yet to be released so we are continuing to interview those who saw it unfold.

On Tuesday, WUSA9 received a new exclusive video from a different angle of the confrontation. Lisa Kays and her family live on 15th near Swann street. Video taken from inside their home and on their stoop appears to show a protester fall to the ground while being arrested.

"It looked like they were gearing up for a military incursion of some sort," Kays said.

According to Newsham, 200 protesters were arrested that night. Another 60 protesters took cover inside in the home of Swann Street resident Rahul Dubey.

"All the arrests happened right here," Kays said, as she pointed to the street from the bay window in her living room. "I could hear them [calling out the protesters] names so I was actually tweeting the names of people in case people were looking for [them]."

Kays and her family live directly across from the alley leading to Dubey’s backyard.

"I was sitting actually right here," Kays said, while sitting in a beige chair by her bay window. " And my son and his dad were just right here playing in a fort and all of a sudden...a parade of cop cars went blasting through here with sirens on."

Kays told WUSA9 that she saw police take out pepper spray canisters from a police van parked in the middle of 15th street outside of her home. While that was happening, she said the protesters were being very peaceful. When the pepper spray was deployed, that’s when Kays said things took a turn.

Kays maintains that apart from a few individuals walking up Swann street, the protesters were peaceful.

"There were like some individual people coming from Swann [that] seemed sort of more antagonistic, but the protesters were clearly like telling them to stay away," she said.

It was the police and people who appeared to be unidentified military that Kays says were causing the tension.

"Then there were these military guys here who had rifles," she said. "And there were police with rubber bullet guns, I think is what they were, and literally nothing was happening. There were just protesters standing there saying their thing. That was it."

WUSA9 reached out to MPD for a comment on Kays account of that night. They referred us to Chief Newsham’s press conference from June 3. WUSA9 has requested the body camera footage from that night, but we're told the incident is still under investigation and the footage cannot be released until that is complete.

Kays is a therapist by trade, and she said that is it very important to her to be an anti-racist parent. She gave a very detailed account of how she approached the conversation about what was happening that night with her 4-year-old son. Kays also emailed a full written account of what she believes happened that night to the DC Council.