A group born out of the initial George Floyd protests called Concerned Citizens marched against gun violence, amid an increased homicide rate in D.C. 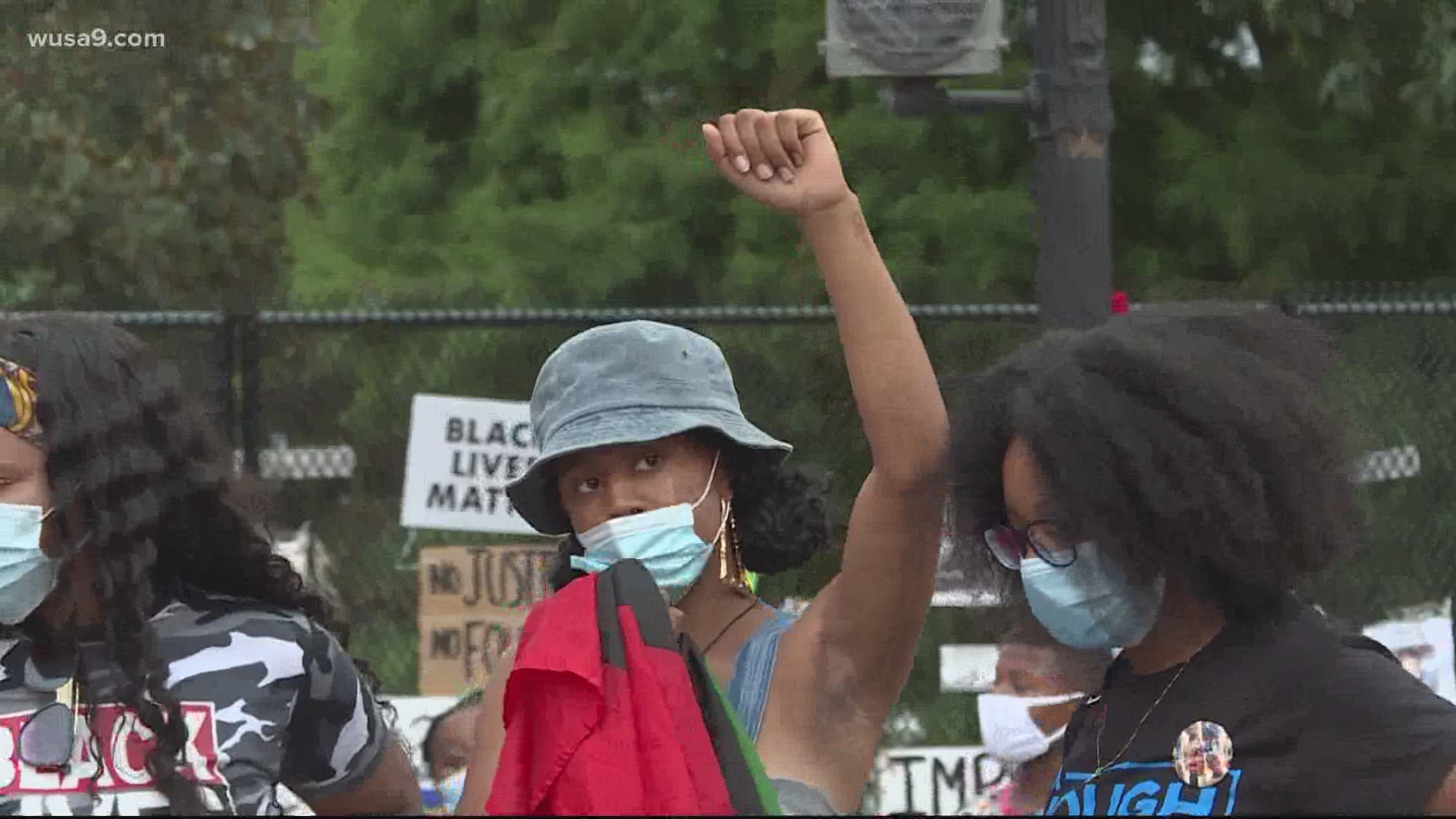 WASHINGTON — Amid a near-20% increase in homicides in D.C., one group marched to Black Lives Matter Plaza again to let lawmakers know the fight for justice, and an end to violence, is not over.

Concerned Citizens DC was born out of the initial protests for George Floyd. The young founders realized that they all were worried about the state of the nation and their communities, and they banded together to make a change.

Since June, they have marched all across the District, decrying police brutality, racism and hatred.

Tuesday night, they joined together again to protest gun violence – both at the hands of police and within their own communities. They marched from the Chase Bank near the White House to Black Lives Matter Plaza to the Martin Luther King Jr. Memorial, chanting “No justice! No peace!” along the way.

“As a native Washingtonian, the idea of seeing gun violence in this city is something that I’ve become too familiar with,” organizer Ty Hobson-Powell said. “So when I see these numbers, it says to me that it’s time now for government to step up, for D.C. government to step up…MPD is not protecting us, and it’s being seen in these under-resourced communities where bullets are flying but resources are not.”

#HAPPENINGNOW: @concernedofdc is marching to #BlackLivesMatter Plaza to protest gun violence. They say this is not over. @wusa9 #DCProtests pic.twitter.com/fCLhACaVXx

The number of protesters showing up in the DMV has decreased over the last few weeks, but organizers said they are by no means gone, or going anywhere.

“No matter how many people are out on the streets, I think it’s important for folks to continue to keep the pressure,” organizer Tylik McMillan said. “Whether it’s 10 people out here or a hundred, the fact of the matter is that we are here to give a message and we are here for elected officials and folks in those rooms and corridors of power to hear the voices of the people.”

As of Tuesday, DC Police reports 111 homicides, a 19% increase from last year. For many of these organizers, it’s unfortunately nothing new.

“I just had to go to a vigil last week because somebody from my neighborhood…he was shot, and it’s devastating because he just turned 18 in March,” organizer Micah Scott said. “It doesn’t stop. I could give you a list of names right now, but if I give you a list of names, what goes after that? And that’s why we’re here…we’re actually to make somethings change.”

Concerned Citizens said they are looking to legislators in D.C. and on the federal level to fund resources for communities – instead of police – and pass laws that hold police to the same standard for crimes as the community is.

He is pushing for D.C. statehood, confident that the lack of voting rights fuels the violence that has killed far too many of his friends.

“We have to understand that the disenfranchisement of a majority-minority city translates to a lot of the things that we’re talking about, namely gun violence,” Hobson-Powell said. “I’m tired of losing friends. I’m tired of hashtag memorials. I’m tired of t-shirts. I’m tired of vigils. I’m 25 and I’ve seen too many of them.”

With that thought comes the words of their predecessors – other changemakers in the fight for civil rights, like the late Congressman John Lewis.

“We understand that while we’re out here that we may not see the immediate results that we’re seeking…but we understand that sometimes we got to make good trouble, we got to make necessary trouble,” McMillan said quoting Lewis. “And, we see something that we have to say something, and here we are doing just that in their tradition to speak up and make necessary trouble in this moment.”

RELATED: 'We can no longer just sit and allow this to happen' | Football teams march with community for Davon McNeal

RELATED: Sisters use art as activism, give back to Black and Brown communities