The D.C. branch of the ACLU filed the complaint on behalf of a demonstrator who said she was injured in the June 1 occurrence. 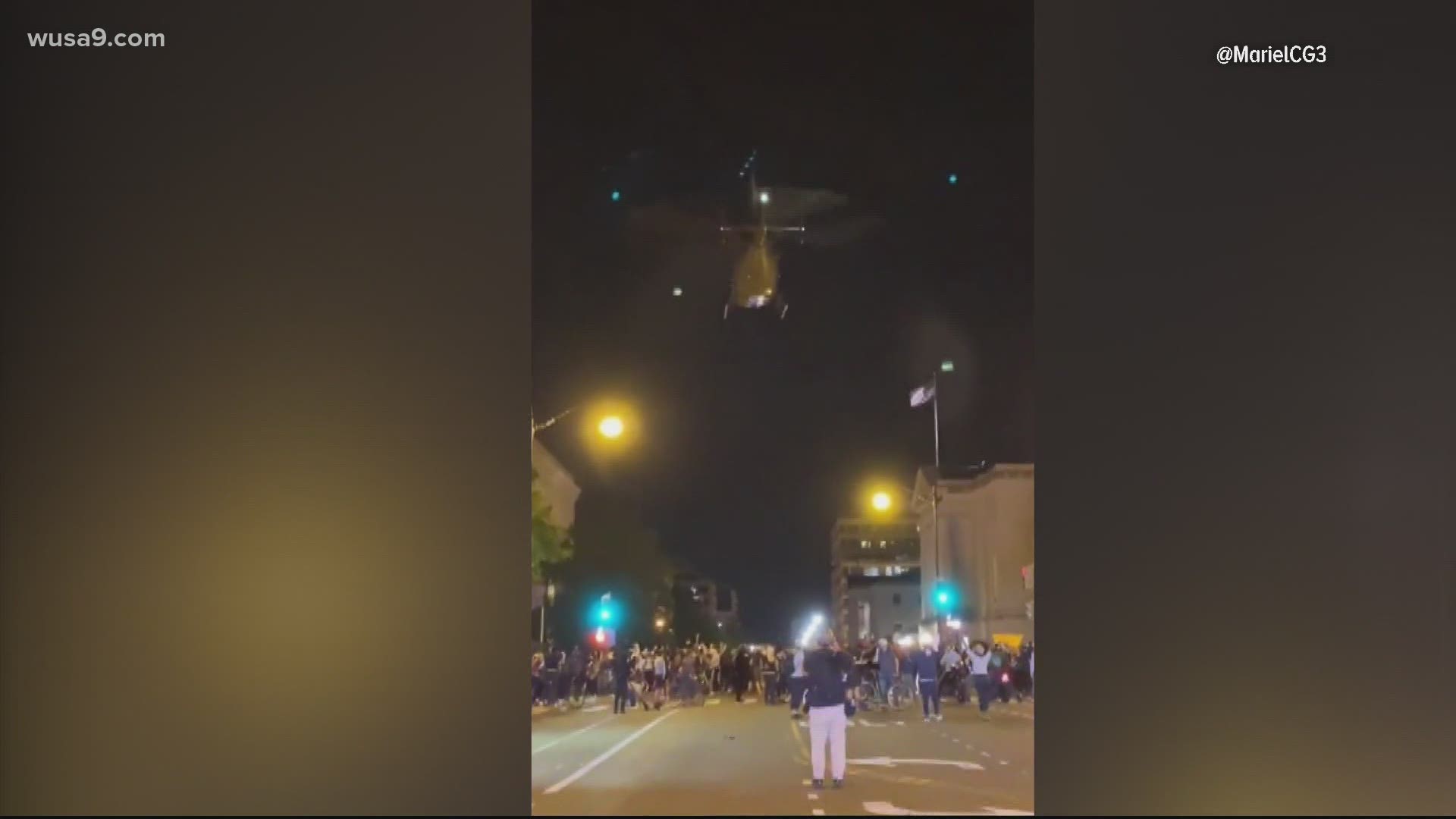 WASHINGTON — In a complaint filed by the D.C. branch of the ALCU on behalf of a demonstrator, the ACLU said 23-year-old Dzhuliya Dashtamirova was injured by military helicopters that were used to intimidate racial justice demonstrators.

Video captured by demonstrators show military helicopters hovering low over a crowd of protesters in downtown D.C. on June 1 during what the ACLU called a racial justice demonstration.

Two days after the occurrence, D.C. National Guard announced it was conducting an investigation into the low-flying maneuvers by its helicopters and the Department of Defense said the crew was grounded as part of standard procedure for a line-of-duty investigation.

DCNG is conducting an investigation into the June 1 low-flying maneuvers by its helicopters to ensure all involved complied with applicable procedures and safety regulations. https://t.co/ZedoLVO3Zr

"We are demanding accountability, we are demanding that the government take action in response to it,” Perloff said. “While we didn't file it for court, because of the particular statutes that are in play, we filed it with an administrative agency. The goals are the same.”

Perloff described the tactics used by the military helicopters as those used in conflict zones around the world and said the helicopters were hovering 45 feet above demonstrators.

“It's called a rotor wash, a tactic that the military employs to disperse groups of insurgents," Perloff said. "To our knowledge, this has never been used to disperse peaceful protesters in the United States and we don't think there's ever a circumstance that it should be used in that context. There's no reason for militarized responses to be employed against people exercising their most fundamental rights, and that's exactly what happened here.”

Dashtamirova said prior to the helicopter descending towards demonstrators, she had been marching peacefully with a group of protesters. She said at the time she was worried military personnel were going to jump out and assault the protesters from the helicopter or kettle the group to arrest them.

“I didn't know what to do, it was a very confusing time,” Dashtamirova said. “All your senses are muted. There's stuff flying into your eyes, you can't hear anything, you can't think, you're just panicked and then you look around and it seems like even more police officers have arrived and you just don't know what's going on and you don't know what to do to protect yourself or protect the others around you.”

According to the complaint, Dashtamirova’s migraines worsened after the event, she lost sleep, struggled to concentrate at work, and spent hours trying to process the incident and grapple with fears it would occur again. The complaint lists she is seeking $200,000 in personal injury damages.

“When I digested the fact that me, and the demonstrators around me, were attacked by the United States military, I realized that I couldn't just be a bystander on this," she said. "I needed to take action and make sure that this never happens again."

Perloff said to his knowledge there hasn’t been an update on the Guard’s initial investigation.

“This is now the first day in a six-month timeline that the government has to respond to our complaint,” Perloff said. “We hope they will take it seriously and explore not only this specific complaint, but the broader incident and practices that it touches on. After that six-month time if the government hasn't taken the sort of actions we think are necessary to reform these practices and remedy the harms that were done, we're going to explore all legal options available to us to make sure that that this point is made clearly to the government that these types of tactics have no place in the streets in the United States.”

Perloff also noted that in D.C. the National Guard can be deployed by President Trump, since there is no statehood separating D.C. from his power.

RELATED: Here's why hundreds of National Guard troops are in DC