The 10-acre tent city in the woods behind a shopping center has provided a free space for shelters for the past 15 years. Some of the people being forced out are homeless veterans. 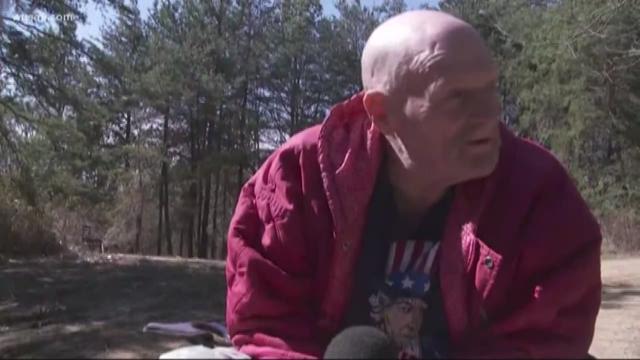 About 40 residents of a homeless camp in Woodbridge have until Thursday to get out. Signs went up in January alerting residents that trespassing fines would be enforced starting March 1.

The 10-acre tent city in the woods behind a shopping center has provided a free space for shelters for the past 15 years. Some of the people being forced out are homeless veterans.

JD Glass, 62, has been homeless for most of his life and has lived in a tent for several years.

“At this very second, I have no choices left,” said Glass.

PREVIOUS: A small token of love for the homeless grows into a campaign

He's a Vietnam veteran. So is 65-year-John Howard, who also had been living in a tent in the homeless camp.

”Today is the last day we can legally be here. Now, a motel I used to stay at has a room, but I mean, once again, I don’t make enough to live in a motel room,” said Howard.

Residents expressed gratitude toward property owner Kenneth Parsons, who has allowed people to live there for 15 years.

“We are really grateful to him because he allowed us to go on with life," said Emily Ayala.

Older residents live in an area that looks like an established campground. Kenny Shendock put his carpentry skills to work making a comfortable shelter for himself.

“It’s built out of treated 2x6 plywood, and I wrapped it with tarps to keep it from getting wet,” explained Shendock. “This is just a place to live for now. It's survival. Cuz you can’t really wrap yourself up under a tree,” said Shendock.

The older residents said the younger ones who took over another section trashed the woods leaving garbage everywhere and may have pushed the owner into kicking all of them out. They said the county sent in people to clean up the garbage and sent the bills to Parsons.

But there’s also talk that Parsons wants to develop the property.

“We’re hoping we can get everyone a safe place for tonight and beyond. The goal is to get everyone into permanent housing,” said Rogers.

Most of the homeless people have left, but a few stragglers are still looking.

We reached out to Mr. Parsons, the property owner, but have not heard back.