PWCS chair calls for superintendent to resign for alleged cover-up

The superintendent of Virginia's second largest school system, Prince William County, is under criticism for how he handled a traffic accident he caused, that left a man injured. 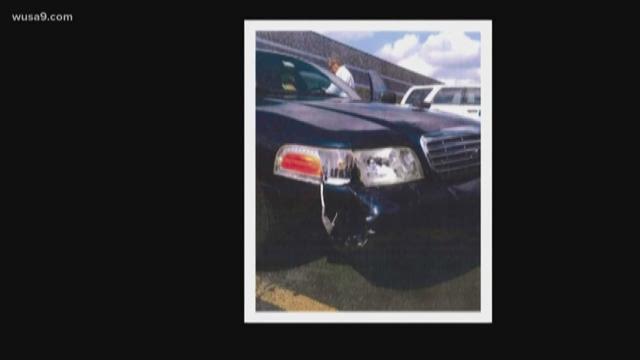 The superintendent of Virginia's second largest school system, Prince William County Public Schools (PWCS), is under criticism for how he handled a traffic accident he caused, that left a man injured.

Now, the school board chairman is calling for the superintendent's resignation.

On August 25th, Maurice Wiggins was hit by a crown Victoria owned by the Prince William County Public School system and driven by Superintendent Steven Walts.

"He was transported from the scene, went by helicopter to the hospital, to Inova Fairfax Hospital, trauma center," said Wiggins' attorney Brandon Gladstone.

Mr. Wiggins was just a few miles from his home riding his Vespa on busy Centreville Road.

Superintendent Walts was coming from the other direction and apparently didn't see the moped and hit him when he took a left turn.

First responders reported Wiggins being unconscious at first, and then, suffering from amnesia.

It's not the accident itself that concerns Prince William County School Board Chairman Ryan Sawyers, but what Superintendent Walts did not do afterward that has him calling for Walts' resignation.

"He did not report to the school board that during a traffic accident, he was charged with a criminal offense with a jail time of up to one year in prison. He never informed the school board during that entire four or five month period. Before and after his criminal hearing," said Sawyers.

Neither Walts nor Associate Superintendent for Communications Phil Kavits would respond to our requests for an interview.

Walts did post a statement earlier this week saying that he did instruct another school system employee to inform the board about the accident.

But Sawyers said the board was told it was only a minor accident and that everybody was okay.

"Not every body was okay. The victim was flown to Fairfax County. The superintendent was cited criminally. Not a moving citation...He has to inform the school board that he was in an accident. His own regulation that he writes. He did not do that," said Sawyers.

Sawyers said the board found out about the Wiggin's injuries when it received his lawsuit and settlement request.

"The superintendent should inform the board that he received a criminal citation while driving school property. And, not only that, he's the highest paid superintendent in the state of Virginia. So, we need to make sure, if anyone needs to be held to a higher standard, it's certainly him. His compensation package is $400,000 a year. And I simply believe that we can find a superintendent that doesn't lie to the school board for less than 400,000 dollars a year."

Walts was found guilty of failing to keep his vehicle under control and was fined $100. Mr. Wiggins have recovered from his injuries.

Here is the statement posted by Dr. Walts:

As you may have heard, an unfortunate accident in which I was involved this summer has now become the focus of unfounded accusations and even a demand for my resignation made by one individual on the eight-member Prince William County School Board. I felt terrible for the person who was hurt. The weeks following the accident were difficult for me and my family. But this was a personal matter. Apart from the required actions that were taken to advise the School Board and specific PWCS offices and insurers of the situation (since a Division vehicle is the only car I drive), I saw no need to distract the school community with details surrounding a personal traffic incident.

I am sorry that inaccurate portrayals have now been promoted to local media, forcing the Division to respond. I am sharing that response with you to provide a more complete picture of the situation.

Dr. Steven Walts, PWCS Division Superintendent, who is away from the School Division for previously-scheduled professional development, is unable to address recent and unfounded allegations personally. Regulation 441.01-3 prohibits any employee involved in an automobile accident from discussing the matter with the media. However, PWCS can provide the following information in response to the allegations.

Dr. Walts was involved in a low-speed accident with the driver of a moped which occurred shortly before 10 a.m. on Aug. 25, 2017. Dr. Walts was operating a school division vehicle, a 2006 Crown Victoria. A witness to the accident stated that it would have been hard for the superintendent to see the moped due to the presence of another vehicle in the intersection.

Dr. Walts immediately called 911 and was instructed by the 911 operator to move his vehicle from the roadway to an adjacent location. The PWCS Offices of Transportation and Risk Management were also alerted and responded to the scene of the accident. Dr. Walts also made a call from the scene to the Deputy Superintendent and School Board Attorney specifically for the purpose of notifying the School Board Chair and Vice Chair of the accident. At that time, Dr. Walts did not have any information on the condition of the other driver other than the driver was conscious and being attended to by emergency responders.

The accident was reported immediately to School Board Chair Ryan Sawyers and Vice Chair Lillie Jessie by the Deputy Superintendent during a prescheduled 10 a.m. conference call to which Dr. Walts was en route at the time of the accident. The Deputy Superintendent notified all other school board members by phone, beginning with calls in the morning and finishing that afternoon. The accident was clearly immediately reported by Dr. Walts to his supervisors, as required by PWCS Regulation 441.01-03.

Dr. Walts was deeply concerned about the condition of the other driver and inquired repeatedly about his condition to the investigating officer. After the other driver left the scene in an ambulance, the police officer advised Dr. Walts that the medics had decided to airlift the other driver to a hospital as a precaution. It was not until Aug. 30, 2017, that Dr. Walts was advised by the Manassas City Police, through the Office of Risk Management, that the driver of the moped “was okay, had a sore knee and no broken bones.” PWCS was able today to confirm that the other driver was, in fact, discharged from Fairfax Hospital at 4:22 p.m. on the day of the accident.

Dr. Walts was represented on the traffic charge by his personal attorney and not by the Division Counsel. Dr. Walts was not found guilty of reckless driving. The traffic court found him guilty of failure to maintain control of this vehicle, all of which is reflected in public record. Dr. Walts’ DMV driving record, as presented in traffic court, showed no infractions over the past 10 years and a +5 safety point balance.

I regret that one individual’s mischaracterization of this matter required the School Division to respond. I cannot say more about the incident itself because of possible litigation and School Board policy. However, I hope that the Division’s response addresses any concerns you might have.

I am happy to respond to questions or concerns raised by the majority of your duly elected eight-member School Board. But please know that I have every intention of continuing to serve as Superintendent to lead ongoing PWCS efforts toward Providing a World-Class Education.