Press Secretary: 'Our intention is never to lie to you'

People who tuned in to the White House briefing Monday expecting fireworks were likely disappointed. 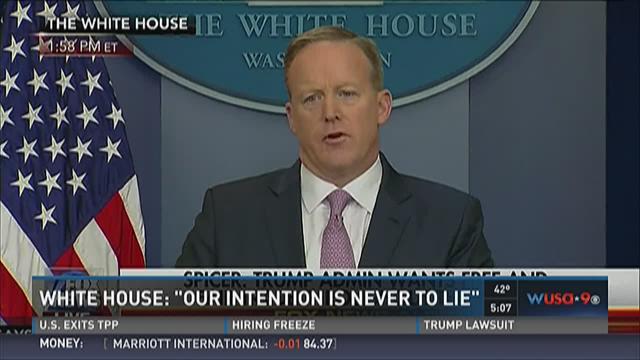 People who tuned in to the White House briefing Monday expecting fireworks were likely disappointed.

It took more than twenty minutes for President Trump's new press secretary, Sean Spicer, to even face the first question about truth-telling and the size of the inauguration crowd which drew some many jeers on line and in the media on Saturday.

It was among the most eagerly awaited White House briefings in years, carried live on every cable news channel.

Would Spicer repeat his angry words insisting, “this was the largest audience to ever witness an inauguration, period, both in person and around the globe.”

Would the President's staff suggest we should not really believe the pictures we saw showing far more people turned out for President Obama's first inauguration?

"If the average American gets caught in the workplace usin' #AlternativeFacts, they are asked to find an #AlternativePlaceToWork," responded @TeaPainUSA. "So many people attended wearing empty bleachers costumes. #alternative facts," tweeted @LibyaLiberty.

"It's nonsense. There are no alternative facts. There's the truth and there isn'," law student Pernell Jackson said outside the Tenleytown Metro.

Even some Trump supporters had a hard time with this whopper.

"I think the crowd was bigger than the media told us," said retiree John Chrislip. "But not as big as (the White House) would like us to think."

Spicer is now insisting the media misunderstood his point.

"I'm saying it was the largest audience around the globe," he said. He told reporters he was talking about both in person, online and broadcast all put together.

“Our intention is never to lie to you,” he said.

He offered an almost plaintive request that the media switch up the narrative about President Trump.

"He can't win that. It won't be the biggest. It's not going to be that good. The crowds aren't that big. The default position is negative. And that's demoralizing."

Spicer did admit on Monday that he got the numbers for Metro ridership wrong. But he said he did not do it on purpose.