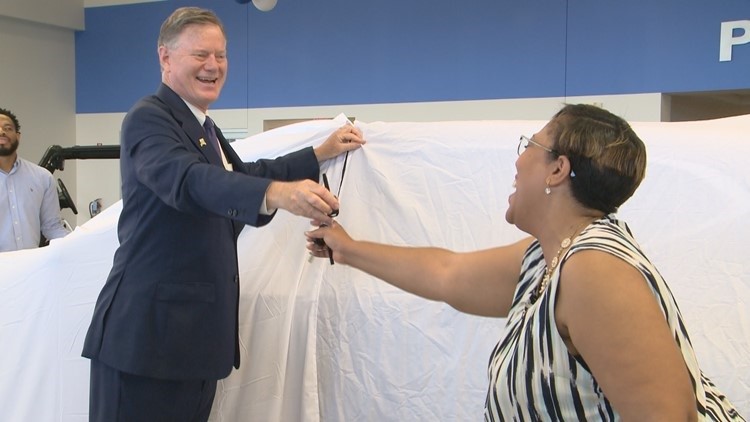 Angelica Brooks and her wife have been sharing one vehicle to get to work and take care of their 3-year-old son. Now thanks to the Pohanka Automotive Group, for the next three years, the Bowie High School choral teacher won't have to worry.
Author: Sarah Gahagan
Published: 2:03 PM EDT May 20, 2019
Updated: 7:20 AM EDT May 21, 2019

Angelica Brooks, a choral teacher at Bowie High School, lets out a sigh of relief.  "It's been difficult. This is truly a blessing.  We needed this," she says.

Brooks is holding the keys to a 2019 Honda CRV LX.  For the next three years, it's all hers.

The Pohanka Automotive Group donated the use of the vehicle to Brooks to help her celebrate becoming the Prince George's County Teacher of the Year. Brooks received the honor out of more than 10,000 educators.

For Brooks, it couldn't have come at a better time.

“My wife and I had fallen into some financial hardships after my mother-in-law died and we were down to one car," she said.

This car means more freedom to go to the grocery store, gym and get her 3-year-old son around.  "He picked the color," Brooks said, pointing to the red exterior.

“Education is the root of everything. I had some learning disabilities early on that were recognized," he said. "I was dyslexic and the educational system really helped me become who I am. So, we have to give back and help our students."

The Pohanka Automotive Group, a family-owned group of dealerships, is celebrating 100 years of business by donating $1 million to our local communities. This donation was part of that bigger effort.

“Giving back is a very important part of our culture," Pohanka said.

Pohanka said when he handed over the keys, he was just as excited as Brooks.

"One of the greatest days of your life is a new car, so it’s great to be able to give that to someone that feeling," he said with a grin.

For educators in Prince George's County, seeing a teacher recognized on this level was special.

"I don’t know any profession where they have not been touched by the lives of our educators," Monica Golson, the interim CEO of Prince George's County Schools said. "Today is an example of how important that truly is ... We’re so grateful for that partnership”

"I’m honored that so many community partners are pouring back into the school system," she said. "I’m sure I’m not the only teacher running around with their family only having one car. It really brings credence to what we do when businesses give back to teachers in this way."

As Brooks got ready to pull away, she still felt overwhelmed.

“My heart is still pounding!" she exclaimed. "Just wow!”

Brooks is now in the running for Maryland Teacher of the Year. That will be announced in October.