In an office park, there is a constant flow of traffic. Cars, trucks and people all assemble around a warehouse that provides food and support to people when emergency strikes. It’s there that we met Erika Aiken, a mother of two living in Reston. 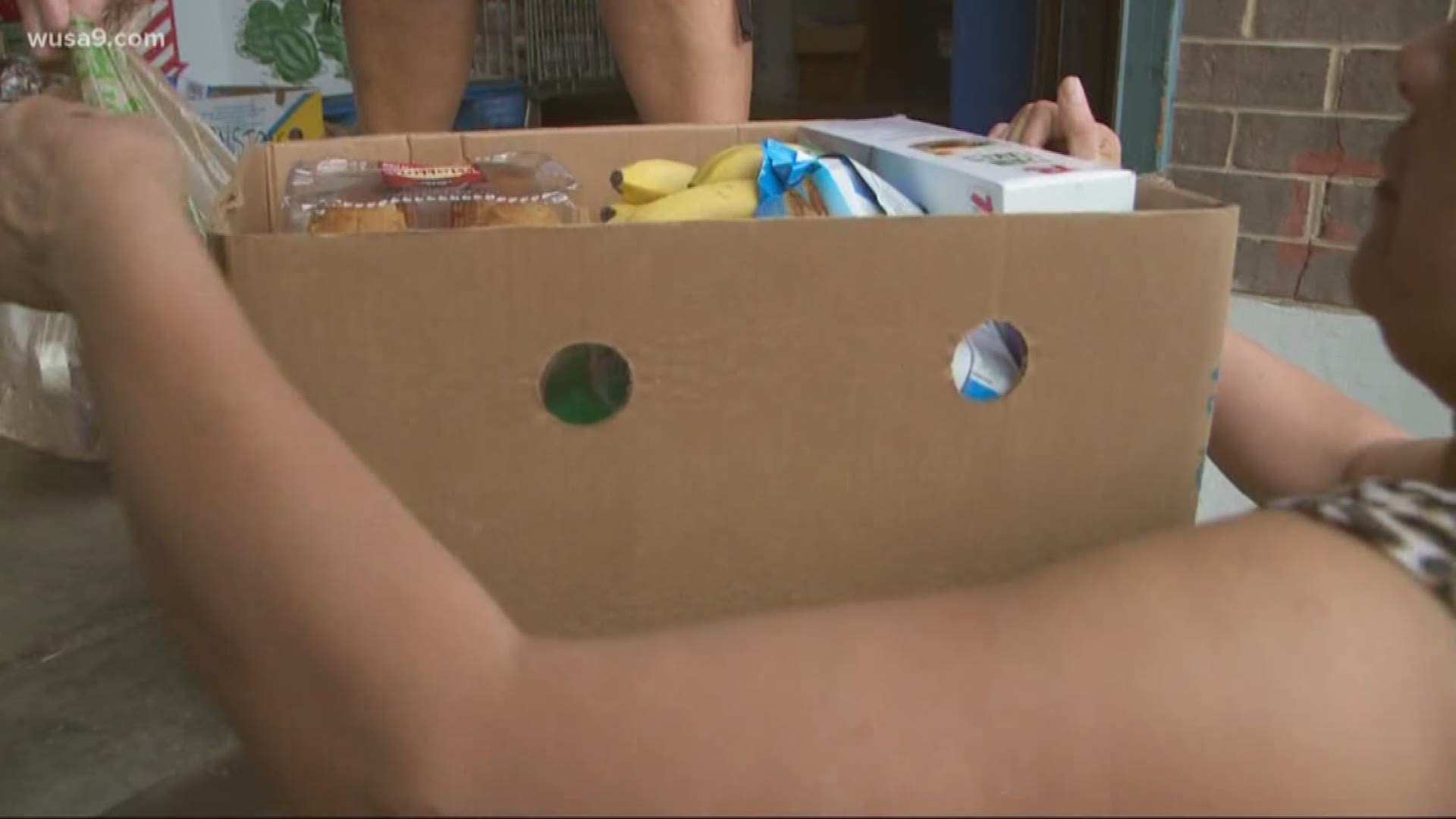 Sometimes, the solution to our most pressing social issues requires a different approach. It can happen when one person is stirred enough to make an impact. Or, a group of people have an "aha" moment that sends them on a path to create a safety net for the most vulnerable among us.

This summer, WUSA9’s Impact team embarked on a journey to highlight a problem hidden in plain sight. We decided to take a revealing look at hunger - in the faces and stories of the children at Francis C. Hammond Middle School in Alexandria.

Many of you were shocked that hunger and poverty exist in such an affluent area. You were moved to take action.

Among the people inspired by Impact: a school secretary who saw the children she serves in the students at Hammond and a pediatrician. He writes a different kind of prescription for families in need.

Our commitment to this issue lead us to that warm and welcoming doctor’s office that cares for children and families and a food pantry in a place you might not expect.

In an office park, there is a constant flow of traffic. Cars, trucks and people all assemble around a warehouse that provides food and support to people when emergency strikes. It’s there that WUSA9 met Erika Aiken, a mother of two living in Reston.

“It hurts, it hurts because I’m the mother,” said Aiken. “I’m supposed to supply for my children. A roof over their head, food in their stomach, and you know, clothes on their back. And, right at this point in time, I’m not doing what I’m really supposed to be doing.”

Aiken is one of more than 90,000 people in Fairfax County struggling to put food on the table.

“Haven’t been working, for a while, had some medical issues. I struggled to pay the bills, to keep the roof over our heads and the lights on in the house,” said Aiken. “And by this time of the month, we’re struggling.”

Food for Others helps families who might otherwise be forced to skip meals. But many are too embarrassed to ask for help.

“We see so many clients in here trying and they just, you know, they’re one step from being homeless or you know, not being able to feed their children through the weekend. And so, we provide the safety net,” said Annie Turner, Executive Director of Food for Others.

It’s a life-saving resource, Erika knows. But she also said, “sometimes it feels a little degrading. You know, people make fun of you for doing things like this. My children need to survive. So, I lower my pride and I do what I have to do. It is what it is. It’s survival.”

Annie Turner knows how hard it is for some people to come forward for support.

“There is, you know, a stigma attached with getting help,” said Turner.

A group of doctors and nurses in Burke saw families struggling. They teamed up with Food for Others to make an impact. Annie Turner met Dr. Fredric Garner at a Fairfax Food Council meeting.

“And he said, ‘I never knew there was this need in Fairfax County,’” said Turner.

Dr. Garner, who’s been in practice for just over half a century, learned that 58,000 children in Fairfax County were food insecure.

Food insecurity means these children aren’t always sure where their next meal will come from. The lack of nourishment can impact a child’s health, development and well-being.

“It kind of lit the flame that we need to do more,” said Sarah Bennett, Nurse Practitioner at Burke Pediatrics.

Burke Pediatrics discovered 9 percent of their patients were at risk of being food insecure.

“They were a little bit relieved that we were bringing it up,” said Bennett. “It’s something that they’ve been thinking about, it weighs heavily on them.”

The mother of one of the children in the practice WUSA9 Anchor Lesli Foster, “We don’t have enough food. Sometimes we don’t have anything at home.”

It was reality for far too many of their patients. So, these health providers decided to change the way all of them look at hunger. Dr. Garner describes how it works.

“We developed an actual prescription. When I identify a family who is food insecure, I write a prescription. And the patient and families enroll in this program,” said Garner.

To determine who might benefit from this resource, Dr. Garner and his team screen their patients and direct them to fill out a survey on their website. Based on the results, they are given a RX for food.

The prescription is an actual piece of paper – similar to what might be written for a drug prescription or referral to see another physician. It’s filled out with the name of the patient and date. It’s officially referred to as “RX for Good Nutrition Health.”

Dr. Garner can specify family size, and then send the family to Food for Others which is also in Fairfax County. Garner calls Food for Others a “food pharmacy.” And, as fast as the food comes in, it also quickly goes out to families in need.

“Donations come in like this, they’ll be weighed in, processed and then taken to the back where the volunteers will end up sorting the donations,” said Leo Delgado, warehouse staff member and driver with Food for Others.

A volunteer showed WUSA9’s Impact team what happens when families arrive with their RX for food.

“The client has two choices at that point. We can either box up their food for them and give it to them or they can come in here and shop for their own food,” said Dawn Matson, FfO Front Desk Volunteer since December of 2013.

At Food for Others, families can select items from fresh produce to canned foods and frozen meats. There are also donated loaves of bread and pastry too. When families are directed there, they are also put into a pipeline for additional services.

“I thank God for this place because they’ve provided necessary meals for me and my children,” said Aiken.

It’s what this food pantry has done for the past 22 years. Several people who work at Food for Others volunteered with the organization at some point. Some even received services themselves.

“You just see this wave of relief roll over them. And they just feel like, okay, I can do this. And, I can feed my family,” said Turner.“Poverty doesn’t discriminate. You come here. You get the help. We have it,” says Delgado. “If we didn’t have programs like this where would we be?”

Now, Burke Pediatrics and Food for Others are asking other doctor’s offices to help them amplify the impact.

“We didn’t just identify them. We actually were able to say look, we can do something about this,” said Bennett.

Annie Turner said this kind of partnership can be just the doctor ordered.

“Imagine the numbers that we could feed if we got, you know, even 10, 20 more doctor’s offices on board,” she said.

Right now, the American Academy of Pediatrics has partnered with the Food Research & Action Center to provide physicians with the tools to screen patients, document their findings and resources that they can be directed to for federal programs around nutrition

But Dr. Garner’s food prescription program goes a step further. A simple sheet of paper grants families instant access to the resource they need most, without the red tape and bureaucracy.

Dr. Garner’s office is the only one in the nation offering this kind of service.
Expanding this program could reach even more people suffering in silence, making hard decisions between feeding their families very little or going hungry. It’s an agonizing choice.

Aiken knows food is more than just fuel. It can heal a body - much like hers - at a time when this kind of intervention is needed most.

“I really wouldn’t know what to do without places like this, sometimes food is actually all you need to feel better,” she said.

If you’d like to help our Impact team address an issue in your community, reach out to us at impact@wusa9.com.