WASHINGTON -- School is in session but for many children in the D.C. area, just getting there and being ready for class isn’t an easy task. Often middle schoolers and their struggles are overlooked.

Kramer Middle School is located in the Fairlawn neighborhood of historic Anacostia in D.C. Roman Smith, the principal is one of the few people who understand the challenges his students face.

“It’s unfathomable what some of our kids face on a daily basis, from waking up, some of them being hungry,” said Smith.

Most of the students live within a five to seven blocks of the school and very few of them have left the area. Many of them wake up without their parents being home.

Smith said they have the responsibilities of adults thrust upon them. Some of his students have to get their siblings dressed and out to school before they even make it there.

All of these challenges make it tough for students to make it to school on time and stay focused when they get to class.

“To go to school I have to, um, drop my little brother off.”

“Does that make you late to school sometimes?” asks Lesli.

“I have to ride the bus, and then I have to wait for my cousin … he goes here too. And then we walk to school together,” said Tyanna.

Lesli talked with Ferrell Moon about what he has to do to get ready for school each day.

“So you are responsible for making sure your sister gets to school before you even come to school?” asked Lesli.

“I just have to look out for my little sister, because it’s a lot of stuff going on in the community and I don’t want nothing to happen to her.”

“From the time they wake up in the morning to coming to school, on the way to school, they see negative things,” said counselor Duffy.

“From people trying to push them in the wrong direction, telling them not to go to school, people selling all types of items, and in some regards, themselves,” said Principal Smith. “I don’t think that many people understand their plight.”

Smith and the other champions for change at Kramer are always on duty. When school lets out they walk students to the bus stop nearby along Minnesota Avenue to ensure they are safe. Their walk to go home could literally turn into a battle for life and death.

“Where the school at is, it be a lot of shooting around our neighborhood,” said Ferrell.

The children appear older than their years. They show the wear and tear of reality in their eyes.

“I don’t go outside. I stay in the house,” said Tyanna.

“You don’t go outside, why?” asks Lesli.

“I don’t know, because at night time, they say it’s like gun shooting and stuff. So, and my Mom, she gets very worried,” said Tyanna. “So I just try to stay away from it.”

Lesli asks, “Does that feel fair to you that you have to deal with this?”

Tyanna seems resigned to a reality that she can’t change.

Melissa Estep has several children at Kramer. She worries about them when they come and go from school.

“Yes I do. That’s why I’m always here when they get out of school,” said Melissa. “I drop them off, personally.”

Principal Smith couldn’t protect one of his beloved students on his way home from the store back in January.

RELATED: Police have video of DC teen moments before he was killed

Steven Slaughter had gone into the nearby 7-Eleven for a slurpee. The 14-year-old was gunned down shortly after he left, right in front of a church.

“Earlier this year, I got a call and [they] told me that Steven was no longer with us. I couldn’t believe it,” said Smith. “He was not involved in anything. He was at the wrong place at the wrong time. And he ended up losing his life.”

Lesli asks, “Was that a gut punch to you?”

“It was more of a gut punch when I went to the funeral. It was standing room only,” said Smith. “And to see the amount of people, that were there, and just thinking and wondering what would occur if we would just put this amount of people, resources, around each of our students, how they would be more successful.”

Lesli: “Promoting them and championing them… while they’re here.”

Lesli: “So they can stay here.

Principal Smith: “So they can stay here and they can thrive while they’re here.”

“Thirty years ago, I was running these streets. Which is this street right here. 18th Street,” said Smith.

“No, I didn’t [go to Kramer]. I always thought that it was a travesty that I could live, not two blocks away, and feel as though I wasn’t going be afforded the best education and experience.”

But now Smith wants to change that for his students.

“I’m here because I feel as though it’s my mission, my God given mission to support this community.

Kramer students have a variety of issues. Some they may try to hide. Some of them are homeless and it’s not just them. Their parents need help too. And that’s why Kramer is one of the United Way’s Community Schools. A place where they can come for more than an education. But it serves the whole family, getting them critical resources.

One of those resources is uniforms.

“I see some kids come in already triggered or upset about uniforms, because they’ve already been told why aren’t you in a uniform by someone else or they’re trying to wear a jacket because their embarrassed because that their uniform is dirty,” said Brooklee Want who teaches English.

One student said he feels sad when he doesn’t have on a uniform.

Mark: “’Cause you don’t know what the teacher’s thinking in their mind.”

Lesli: “You think they think differently about you without your uniform?” (He nods yes)

Lesli:“What if everybody here at Kramer was able to have a uniform?”

Mark: “That would be very good because they won’t have to make excuses as why they’re not wearing a uniform. That would be really good for me.” 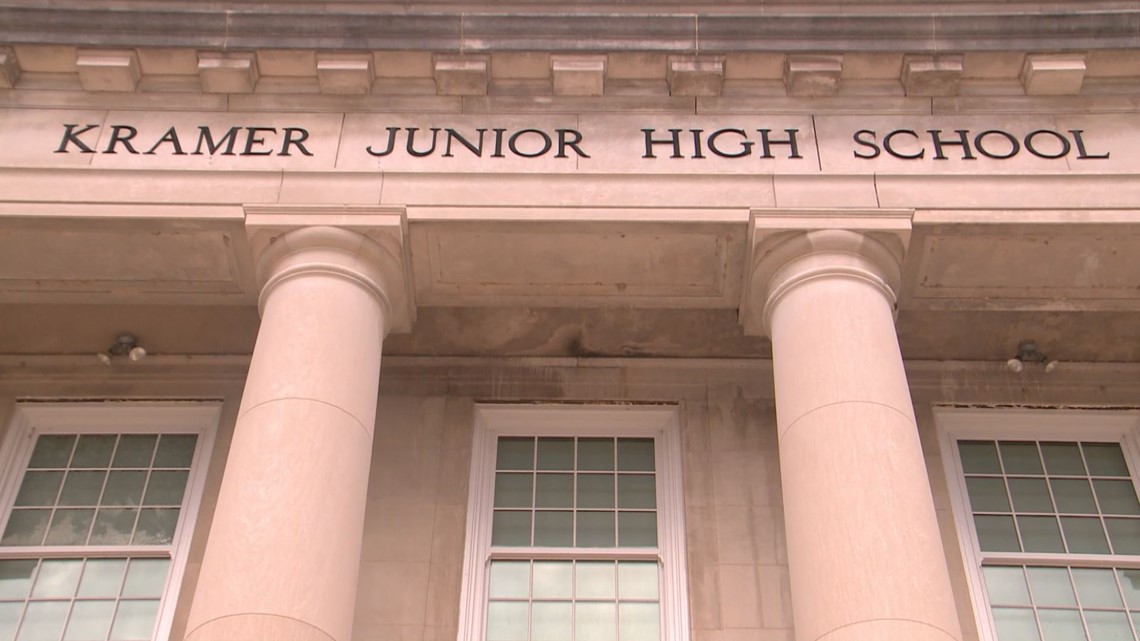 But the students here need more than just uniforms.

Principal Smith and Counselor Duffy said what the students need most can’t be bought. It’s exposure and time with adults who care.

“They don’t get from within a five-block radius of their neighborhood,” said Principal Smith. “So they don’t know what’s out here. They don’t know that it can be better than this.”

“We want to expose our students to people who look like them who are successful,” said Counselor Duffy.

MORE STORIES FROM THE IMPACT TEAM

Kramer needs about 100 mentors so that they can be paired with up to two students and forge a strong connection. Principal Smith said his students need that much of a person’s time and support. Kramer has access to maybe 20 mentors now, but clearly the need is greater than they can meet.

There are some people who come back from the community to help students see their potential. Retired D.C. Police Detective Kevin Copeland is one of them.

Cliffone Ault does his part, too. As a site coordinator for Communities in Schools, which partners with the United Way to provide resources to students and their families, he knows how the power of a connection can change a life.

The kids call him Mr. Ault. Before he became a mentor and coach to students at Kramer, he was a professional athlete.

Lesli: “When you see these kids do you see yourself?

Mentors have the power to show children a different way of seeing the world. Mentors like Mr. Ault do that and more for the students like Ferrell Moon.

Lesli: “You have a mentor. And, what does the mentor help you do?”

Lesli: “Why is it, do you think, important to have a mentor? What does a mentor do for you?”

Ferrell: “Because I don’t got a father figure in my life, so, it makes me feel good because my father here not to help me.”

Lesli: “You don’t know where he is … so your mentor has helped step in to fill the gap?”

Ferrell starts to cry. He starts to talk, but the tears flow and soon he buries his head and eyes in his sweatshirt.

It’s a reminder that mentors are invaluable to these students and make a huge difference. Mr. Ault fills a void in Ferrell’s life that his father does not.

“I feel like I was able to support Ferrell since I’ve been in school last year, yeah. I Just want to see him continue to excel. That’s my guy. Super proud of him,” Mr. Ault said. “I love him and I want him to do the best and I’m going to be here with him not just through middle school but throughout life.

Even Mr. Ault didn’t realize how important he is to Ferrell.

Kramer is a school with more than 200 students. They have great needs, but also great potential. They just need our help. And, Principal Smith has made it his life’s work to ensure they see world beyond the walls, the streets and the influences that envelope their existence.

“What the thing you want people to know the most about the young people here at Kramer Middle School?” asks Lesli.

“That they’re powerful beyond measure. These students have more perseverance than a battery of adults. People don’t understand that. To go through what they go through on a daily basis and still wake up and still move forward and still strive to be better,” said Principal Smith. “If they’re given the chance and the right opportunities, they will be successful.”

If you're interested in mentoring, you can sign up through the United Way. If you'd like to donate, click here. If you would like to buy uniforms, you can call Al from Uniform City at 301-420-4493. You don't even have to go into the store to place your order. If do, it's located at Great Eastern Plaza Mall at 6421 Marlboro Pike District Heights, Mayland 20747.