When this mom lost her legs, she knew she would still be there for her family. WUSA9 decided to help out in a big way. 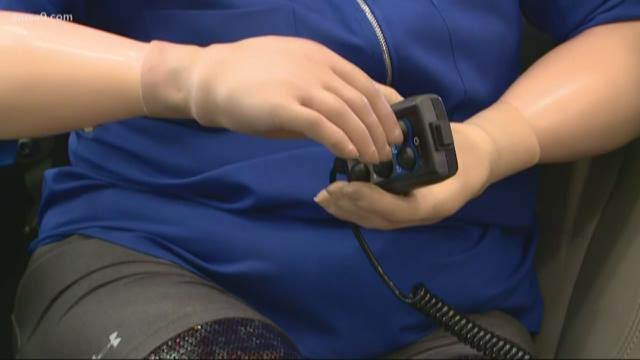 Mom's know it’s not easy juggling everything. So when one Montgomery County mother who told us her story and how she’s fighting to be there for her family, WUSA9 decided to team-up with the community and help make an Impact!

That led us to Friday, February 2, 2018. A whole group of family, friends and employees of DARCARS Toyota lined the showroom floor of their Silver Spring MD location.

Amanda Flores walked-in to a loud applause. She stopped, took a deep breath and began to cry.

WUSA9 first met Flores is August of 2017. Reporter Stephanie Ramirez came across her GoFundMe Page and learned Flores was trying to raise money for a van.

The applause inside the Silver Spring DARCARS location, was the day Amanda Flores was gifted a brand-new van…and not just any van.

“Whoa mommy, your seat is so cool,” said her son, Andy.

Flores received a vehicle fully-equipped with the technology to help a quadruple amputee drive.

Yes, Amanda has four prosthetic limbs. She went from learning how to move and all all over again, to wanting to fly-down I-495.

“Miss Amanda, please enjoy your sweet, sweet Sienna,” said an automated voice prompt on the van when it turned on.

IMPACT: When every mile matters

It took a village of her family and friends to get to this point. Madelyn O’Neal is a former UMD Nurse Flores credits with saving her life.

“How close had she come to dying?” WUSA9’s Stephanie Ramirez asked. "I think she only had a 15 percent chance of surviving when I originally picked her up,” said O'Neal

Around three years ago, on Christmas Eve, Flores says a misdiagnosed case of strep throat landed her in the hospital with sepsis, a bacterial infection of the bloodstream. Sepsis can cause organ failure and death. Around 250,000 Americans die from Sepsis each year, according to the Center for Disease Control and Prevention (CDC).

Flores’ says her parents had to make the painful decision to amputate, or she would have died. Her world changed forever.

When I first spoke to Flores, she told WUSA9 having a van would mean getting her independence back for her whole family. We shared the story.

In our August report, Flores as she told us, “It’s okay that it happened to me but it’s not fair to cut them short of what they deserve and the childhood they deserve and I just their would really love to make them feel as normal as possible.”

After hearing that, our Anchor, Leslie Foster said, “I bet someone’s going to help in a big way.”

That someone was John Darvish, the President of the DARCAR Auto Group. He emailed WUSA9 saying he wanted to help in “a big way."

So excited! Over the summer, I met this inspiring woman and mother of two. Her name is Amanda Flores. She lost her limbs to Sepsis but has been determined to move forward and overcome ever obstacle ever since! Then came a HUGE surprise! pic.twitter.com/sXBpFbJztb

Darvish offering to work with Amanda to get the custom van she needed, and pay for it, in full. Outfitting the van, a project experts say usually takes closer to a year to complete if not more, was finished in just a few months! Davish says the final donation came to around $80,000.

Family members cried along with Amanda when she received the generous gift. Many of Flores’ family members have been taking turns, taking Flores to doctor appoints and therapy sessions, or helping with the boys because Amanda could not drive.

“It just fills my heart and bring tears to my eyes because we’re just so lucky to have her. I mean, we came so close to losing her,” said her sister, Isabel Flores Llerena.

“People have asked me if you could go back and still have your arms and legs, I’d say, 'No,'” because look at all the amazing people I’ve gotten to meet through this journey,” said Amanda Flores.

You could easily see how close friends she and John Darvish had become. The two laughed hysterically when Amanda’s youngest son hopped into the van. His pants were dropping down at the time.

“He’s uh, the grandson of a plumber, right there,” Flores joked.

"I talk about how I’ve had to let my old identity go but through this, I see a little hints of the old Amanda and it’s a relief to know she’s still – she’s still in there somewhere...I feel so blessed to be. Uh, to be part of it all,” said Flores.