Call For Action gets problem solved

A consumer thinks he lost a big chunk of change but WUSA9 gets the problem solved. 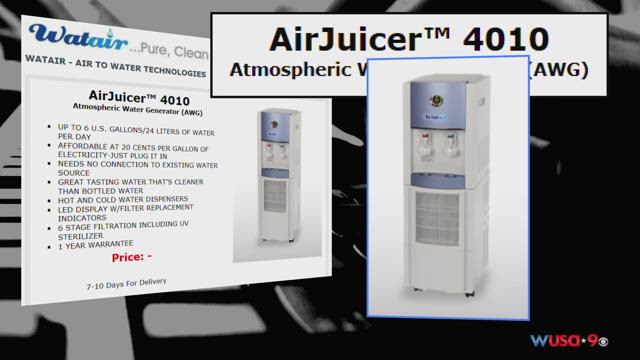 CAPITOL HEIGHTS, MD (WUSA9)-- A consumer thinks he lost a big chunk of change but WUSA9 gets the problem solved.

Hugh Collins is something of a survivalist.

"I wanted to be more self sufficient if anything happened to the power supply or the water supply," says Hugh Collins.

With that in mind Collins went surfing on the internet and found the Air Juicer. It's designed to extract humidity from the air and turn it into drinking water.

"It can produce up to six gallons of water a day." says Hugh Collins. "Fresh, clean drinking water,"

With tax, shipping and handling the cost was just over $1200.

"I put my credit card information and gave me a confirmation number, sent me an email saying your order is on the way," says Collins.

Collins bought the air juicer from this company. Watair located in Las Vegas. That was in August.

Finally out of frustration he sent one last email.

"Saying I really hate doing this, saying this kind of thing but I will go to Channel 9 news," says Collins.

And he did. Collins contacted Call For Action and we went to work. And within a day.

"The company called. Robert Rosner, he's the president of the company," says Collins. "He actually called me and apologized and said he would take care of it."

In a statement to WUSA9 company president Robert Rosner called this "an isolated incident" having to do with a "former vendor" and he "apologized for any confusion."

"I'm so glad that I called WUSA 9 Call For Action. They got results like really, really fast."

Call for Action: Negative options: When you don’t say “no” it means “yes”