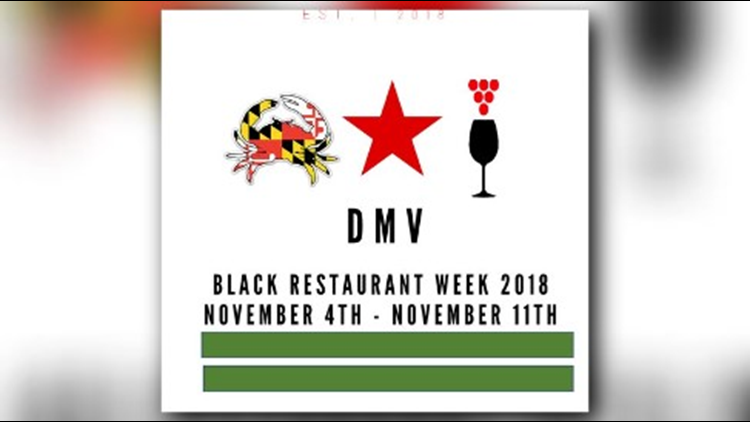 'More than just a plate': The DMV will have its first Black Restaurant Week in November

Did a favorite storefront or taste of your favorite dish just come to mind? Or are you stumped?

No matter how you answered, the creators of the DMV’s first Black Restaurant Week want to engage you.

“It’s more than just a plate,” Furard Tate, a third generation Washingtonian and one of the three creators of the event said of Black Restaurant Week. He was the chef of Inspire BBQ on H St., which would train young people interested in the culinary arts.

He says the DMV’s first Black Restaurant Week will be about talking about black-owned restaurants and helping them and even more grow and exist. It’s about building.

The idea came together between Tate, Erinn Tucker, a professor for Georgetown’s Master’s in Hospitality program, and Andra "AJ" Johnson, who will be publishing a book called “White Plates, Black Faces.”

The three share a passion for education, which will be a cornerstone of the week taking place from November 4 to 11.

RELATED: The history behind 60 years of Ben's Chili Bowl

Through panels, an awards brunch, and more, the week aims to overcome more than just the question of knowing about black-owned businesses in D.C.

Tate says a lot of black chefs don’t have the financial means to move up, or don’t know to do the licensing process in the DMV.

“There’s a lack of education and resources,” he said.

From a hospitality standpoint, Tucker says there’s uncertainty for hospitality students after graduation. “There’s no knowledge platform,” she said.

And that’s where the education aspect comes in.

“We want to show caterers how to get from catering to the food truck,” Tate said. Working alongside several D.C. government agencies, and organizations, Tate says they plan on providing those resources.

“We can dine together, but we want these restaurants to know…information is here,” Tate said.

To prepare, Tucker says they’ve done research into other Black Restaurant Weeks in other cities, but says every food scene is unique and D.C. is no exception.

She called it is a “renaissance" and says that D.C. has a vast “amount of diverse talent and chefs…We have a collective wealth of talent.”

Tucker and Tate say they’ll be announcing which restaurants are participating as the week draws closer, but said that’ll depend on community engagement. They want D.C. residents to go out and take photos with their favorite black chef or black-owned restaurant. And they want people to post them using the hashtag #DMVBRW.

Aside from bringing awareness and education to restaurateurs in D.C., the week will also be about recognition of community members who are paving the way to more black-owned businesses in D.C.

An awards brunch will end the week, “spotlighting owners, managers, politicians, tastemakers and non-profit organizations that are blazing the trail and supports the community 365 days a year,” the website says.

Additionally, those interested in attending can look forward to food trucks, a bartending competitions, happy hours and discussions with chefs.

Tucker and Tate hope the week can be a way of inspiring community.

Black-owned restaurants, Tate says, “are beacons of hope,” allowing young people to see themselves reflected back. He cited chefs and restaurant owners in the area who have done great things for the community or have lived and worked in the city since they were young.

Importantly, he says it’ll also allow “restaurant to see their impact” in the community.

“Food brings us together,” he said.

The DMV Black Restaurant Week will take place in November. You can follow along with updates here.