Family searching for man with mental illness, who has been missing in DC for seven months

60-year-old Dirk Graves was last on June 11, 2019, when he was discharged from United Medical Center in New York City. 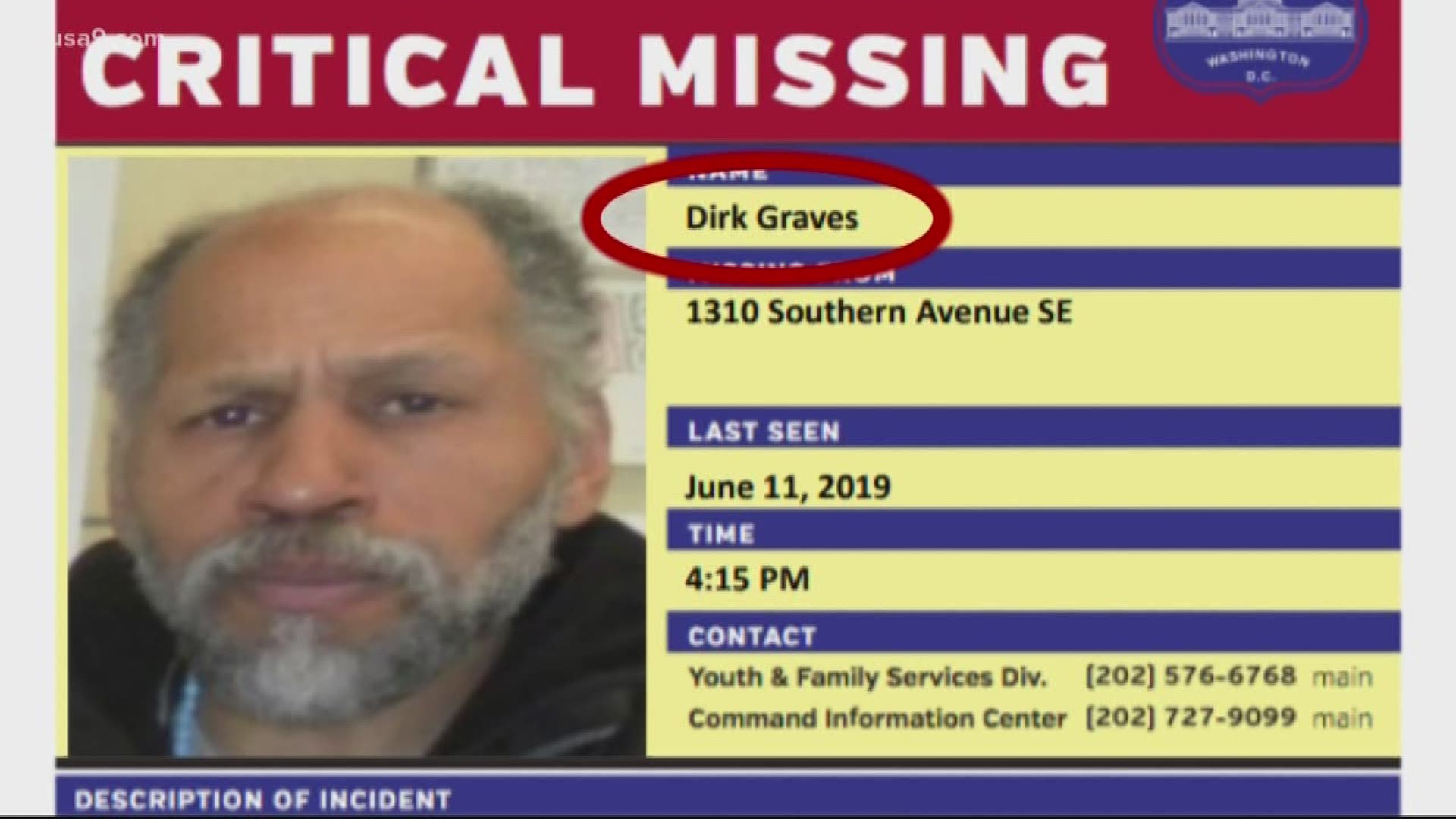 WASHINGTON — A niece is desperately searching for her uncle, who has been missing in DC for seven months, according to police.

Tiffany Graves said her 60-year-old uncle, Dirk Graves, somehow made it out of the nursing home where he lives in Queens, New York all the way to DC and has been missing ever since the spring.

DC Police listed Graves as critical missing in June 2019. They said he was last seen being discharged from United Medical Center on June 11 and has not been heard from again.

"It's been so long, and I'm really starting to get nervous about it," said Tiffany.

The nursing home confirmed he has a mental illness that makes it especially dangerous for him to be out on his own.

Tiffany doesn't want folks who come across him to worry about him being a danger to others, though. She said, "He’s very docile. He’s very quiet. He’s very shy. He’s very cooperative. He’s very kind, easy to talk to. And he’s not familiar with DC, so he would appear to be lost and out of place.”

Both the home and Tiffany said Graves has a tendency to wander off, but typically he only heads to Brooklyn, where some of his family lives.

"He's a vulnerable adult, so it's possible that people could be taking advantage of him, so I'm wondering if he still has his identification or his wallet," said Tiffany.

Tiffany said they do not have any relatives in the DMV, so he would not have a person to contact or a place to stay.

“We have no way of tracking him through financial statements, through any kind of financial records, ATM cards, bank records, there’s none of that involved when you have a person who’s transient and moving about, you have no way of a fingerprint to go and track them," said Henderson Long, a missing persons advocate in DC. "The degree of difficulty rises tremendously when you’re trying to locate them.”

According to online data, DC Police is working 20 open missing persons cases as of January 30, 2020. Four of them involve critical missing adults.

Last year, data shows that they investigated more than 3,500 missing persons cases and solved all but 38 of them.

Police and missing persons advocates said they have been canvassing the entire district for months, visiting multiple shelters to see if he has turned off. So far, they have had no luck.

Desperate for answers, Tiffany has started a Facebook page to aid in the search.

"It's been really challenging," said Tiffany. "But, I'm trying to remain hopeful and positive, because in my heart, I do believe that he's out there. It's just a matter of where."

Long's nonprofit DC's Missing Voices is offering a small reward for any information that leads to finding Graves.

The family asks that if you see him, please call the police and wait with him until law enforcement arrives.

RELATED: More than 2,000 kids go missing in DC every year. This music video is helping find them