A Charles County couple woke up to find not one, but two sinkholes in their backyard. 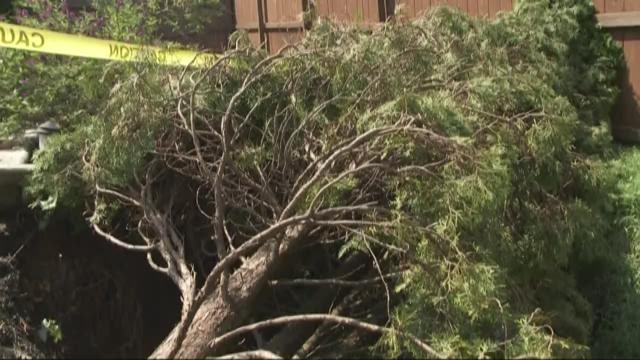 A Charles County couple woke up to find not one, but two sinkholes in their backyard.

Now they might be getting stuck with a $100,000 bill to fix the sinkholes, even though they formed after a drainpipe that serves their neighborhood busted.

Coral and Gary Showalter have lived in their house in Waldorf since 1998. They have a beautiful backyard, complete with in-ground swimming pool. But just feet away, two sinkholes formed within the last month. It's all because a pipe that goes underneath their backyard busted. Coral says the drainage pipe serves their neighborhood and even nearby Route 228.

A couple in Waldorf says they are looking at a $100k bill to fix a storm pipe that runs under their backyard. Who pays? pic.twitter.com/DwEToPiLtV

"We first saw the sinkhole on the morning of Saturday, July 29th. On the 11th, we had more rain that Friday night, it really came through here like a gully washer," Carol said. "It is now eroding underneath the support for our pool. So, we're at risk of losing the pool. The Showalters need to act quickly. Rain is predicted later this week. The problem is, it's not a cheap or easy fix, says Coral, "Well, the lowest estimate we've received was $86,000, the highest estimate was $120,000. A little more money than we have in the bank."

RELATED: Who's responsible for cleaning this?

She says time is ticking. It's been two weeks.

"It didn't sound to me I was responsible for all the ones that were under the street and people's backyards," he said.

When asked if this is a gray area, Dave replied, "Absolutely."

WUSA9 called the County. They say that pipe is not part of the storm water infrastructure they maintain and it's a private matter between the Showalters, the developer and/or the homeowner's association.