Video of the arrest of 23-year-old Montgomery County man who said he was trying to help a drunk neighbor get home has gone viral. 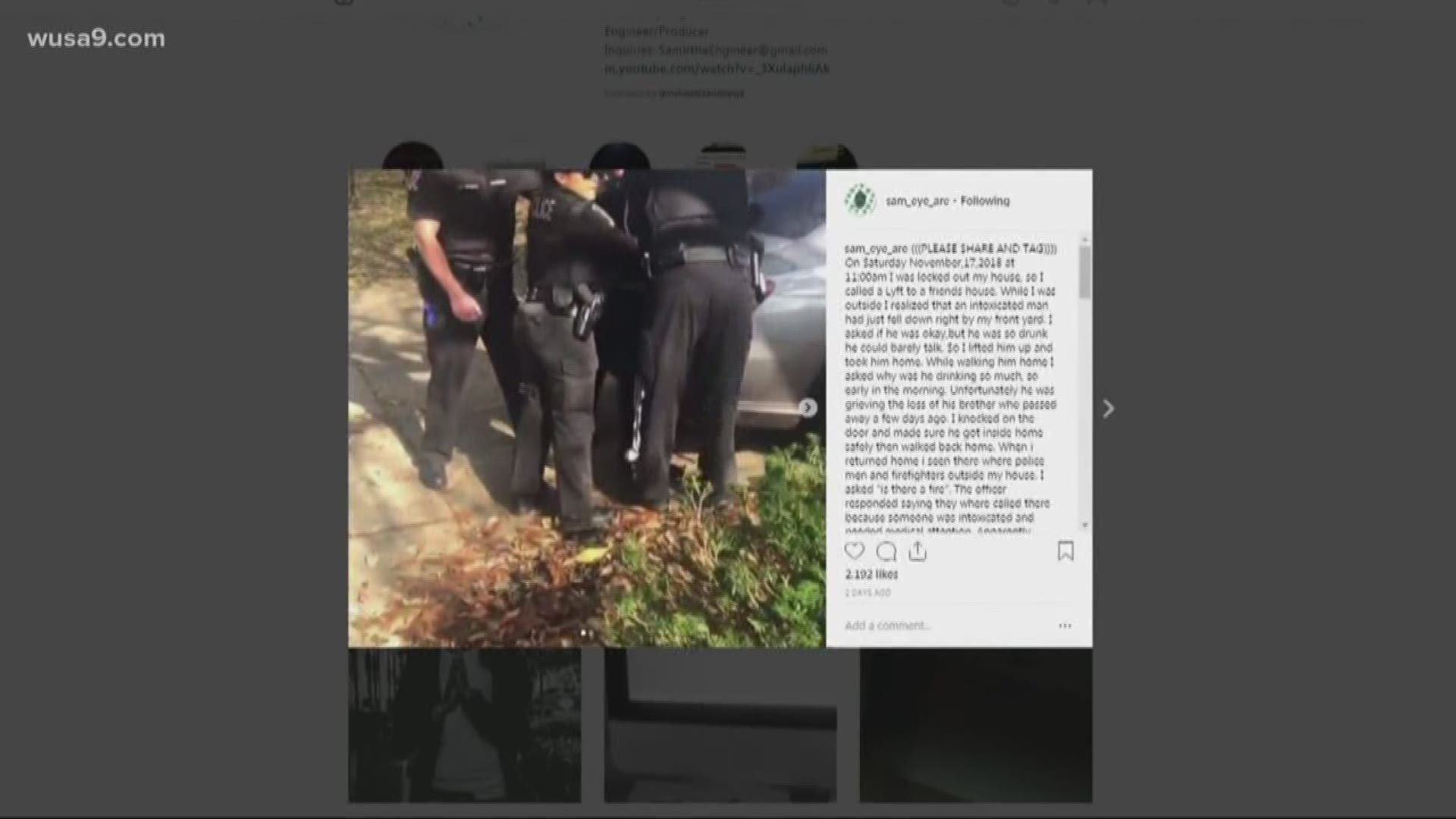 SILVER SPRING, Md. -- Video of an arrest of a Montgomery County man is going viral and getting attention from celebrities, such as Comedian D.L. Hughley.

The clip has more than 13,000 likes and hundreds of comments on Instagram.

The footage shows a 23-year-old man being arrested after he said he was trying to help a drunk neighbor get home. 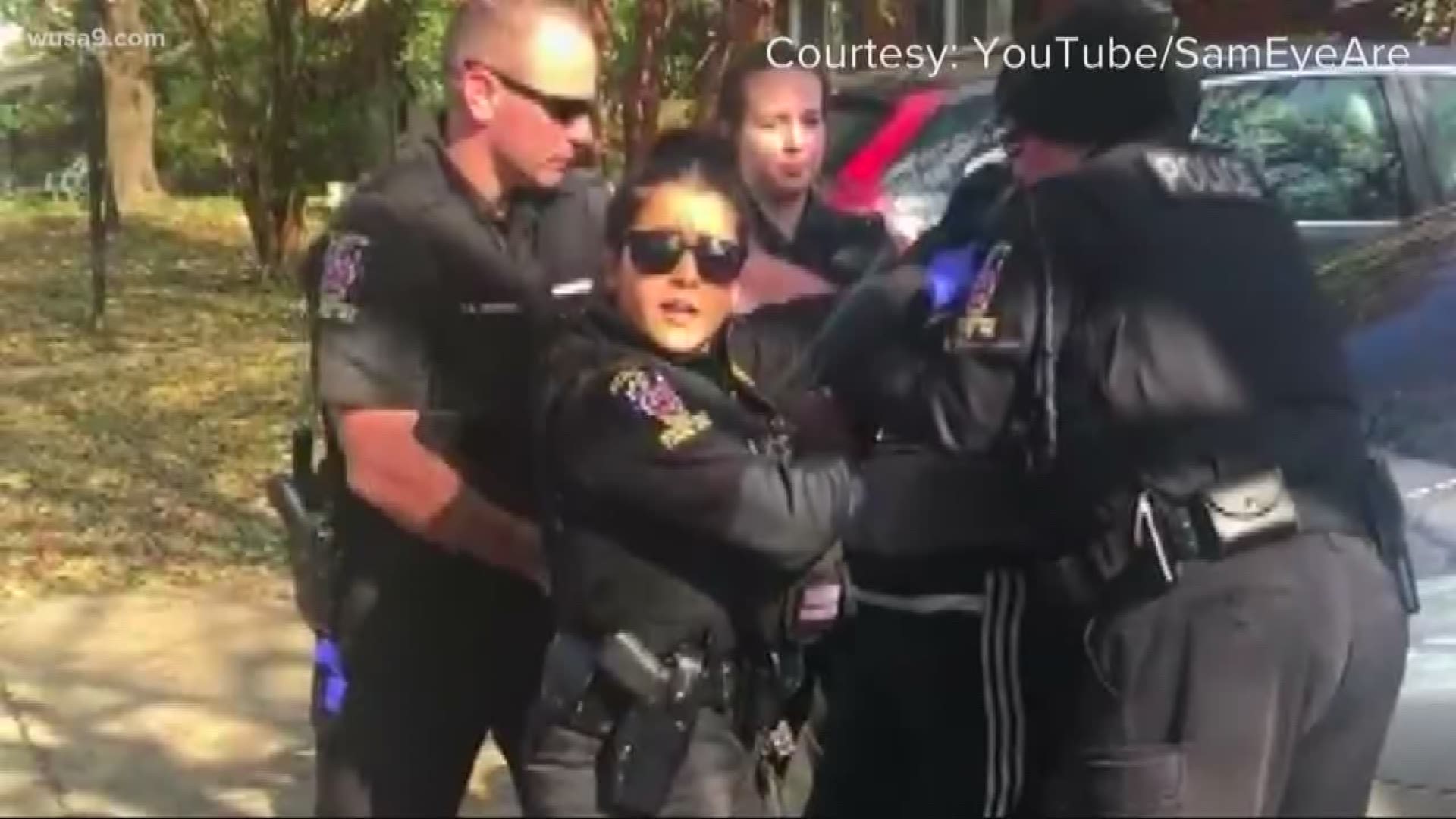 "He lives here. This is our neighbor," someone screamed in the video.

The video shows police arresting a man in Silver Spring one week ago.

You can see four officers pinning a man to a car as neighbors yelled in the background.

One person asked, “What is he under arrest for?”

“We don’t answer to you,” an officer responded.

The man being arrested in the video is Samir Ahmed. The 23-year-old was unavailable for an interview on Saturday but shared his version of the story with WUSA's Michael Quander.

Ahmed said he got home around 11 a.m. Nov. 17 and found a drunk man passed out near his front yard on Malibu Drive. He told his followers on Instagram that he picked the man up and walked him home.

Ahmed said he did a good deed but came face-to-face with police when he got back home. Someone already called 911 for the man Ahmed just said he helped.

"It was a man that was out here that was unconscious. He helped the man," a person behind the camera shouted to officers during the arrest.

(((PLEASE SHARE AND TAG)))) On Saturday November,17,2018 at 11:00am I was locked out my house, so I called a Lyft to a friends house. While I was outside I realized that an intoxicated man had just fell down right by my front yard. I asked if he was okay,but he was so drunk he could barely talk. So I lifted him up and took him home. While walking him home I asked why was he drinking so much, so early in the morning. Unfortunately he was grieving the loss of his brother who passed away a few days ago. I knocked on the door and made sure he got inside home safely then walked back home. When i returned home i seen there where police men and firefighters outside my house. I asked “is there a fire”. The officer responded saying they where called there because someone was intoxicated and needed medical attention. Apparently before I had seen the drunk guy he was unconscious in somebodies lawn.I explained how I carried him home, and showed my ID to prove that I lived on the residence. After answering all there questions in a respectful manner, one the officers said”I think you’re the intoxicated one”. I was later arrested as seen my in the video but was never told what for till literally 3 hours later. I’m currently fighting four charges and Fox 5, NBC, and CBS won’t shed light on this situation SO PLEASE SHARE! Shout out to the Peters family for recording and all the love and support they showed through this situation.

"The officer smelled an odor of marijuana coming from him," a Montgomery County policeman told the crowd in the video.

The suspicion of marijuana gave police probable cause to search Ahmed, but law enforcement claimed Ahmed refused and gave them a hard time. He was arrested and charged with resisting arrest, disorderly conduct and other charges.

Court documents confirmed that police never found the person they were originally searching for but were talking to Ahmed in front of his house because that is where they were called and his car door was open.

Officers in the video yelled that they thought Ahmed was intoxicated, but he claimed he was sober.

Ahmed told WUSA he received a citation for a small amount of marijuana he had with him.

The biggest complaint from neighbors who were heard in the video was that this incident happened while Ahmed was trying to help a man in need.

The viral video does not show what happens before or after the clip.

Ahmed said he has a long list of complaints about how the police handled the situation. A Montgomery County police spokesperson declined to comment on the viral video.

Ahmed heads to court in January to answer to the charges.