A box labeled 'moldy photographs' went untouched for a decade. Now, students are studying them to learn how to preserve, archive and research without many details. 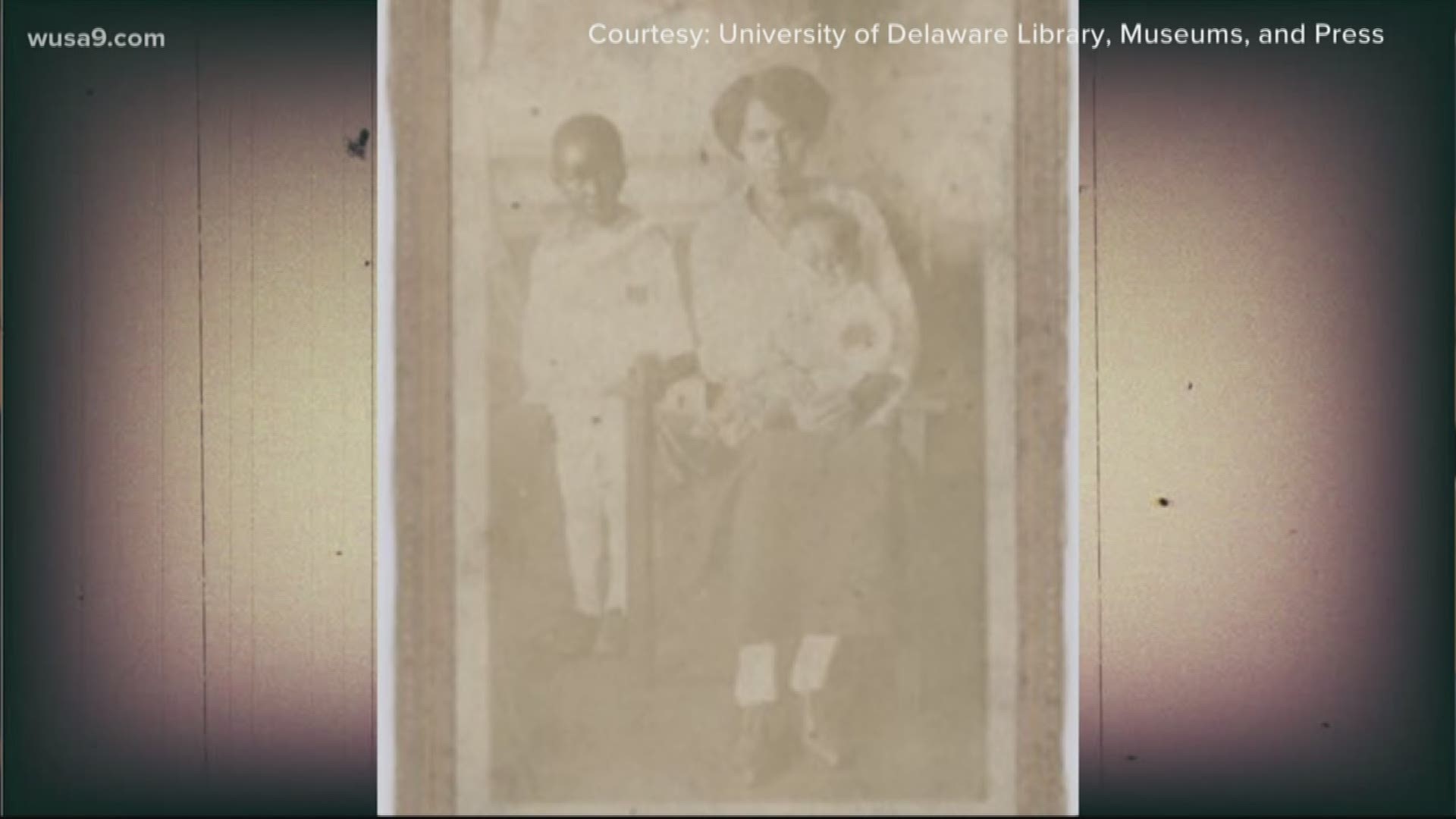 NEWARK, Del — It is often said that every picture tells a story, but the full history behind a photo collection of unknown black people from the late 1800s and early 1900s remains a mystery.

The pictures mainly depict black people and were found abandoned in Baltimore. Someone went through the photos, put each one in a protective sleeve, and stuck the collection in a box.

"They stayed in a box in a photographic studio, and it was labeled moldy photographs," Julie McGee, a professor of Africana Studies and Art History at UD, said.

The pictures went untouched for for than one decade until McGee got her hands on the box labeled "moldy photographs." 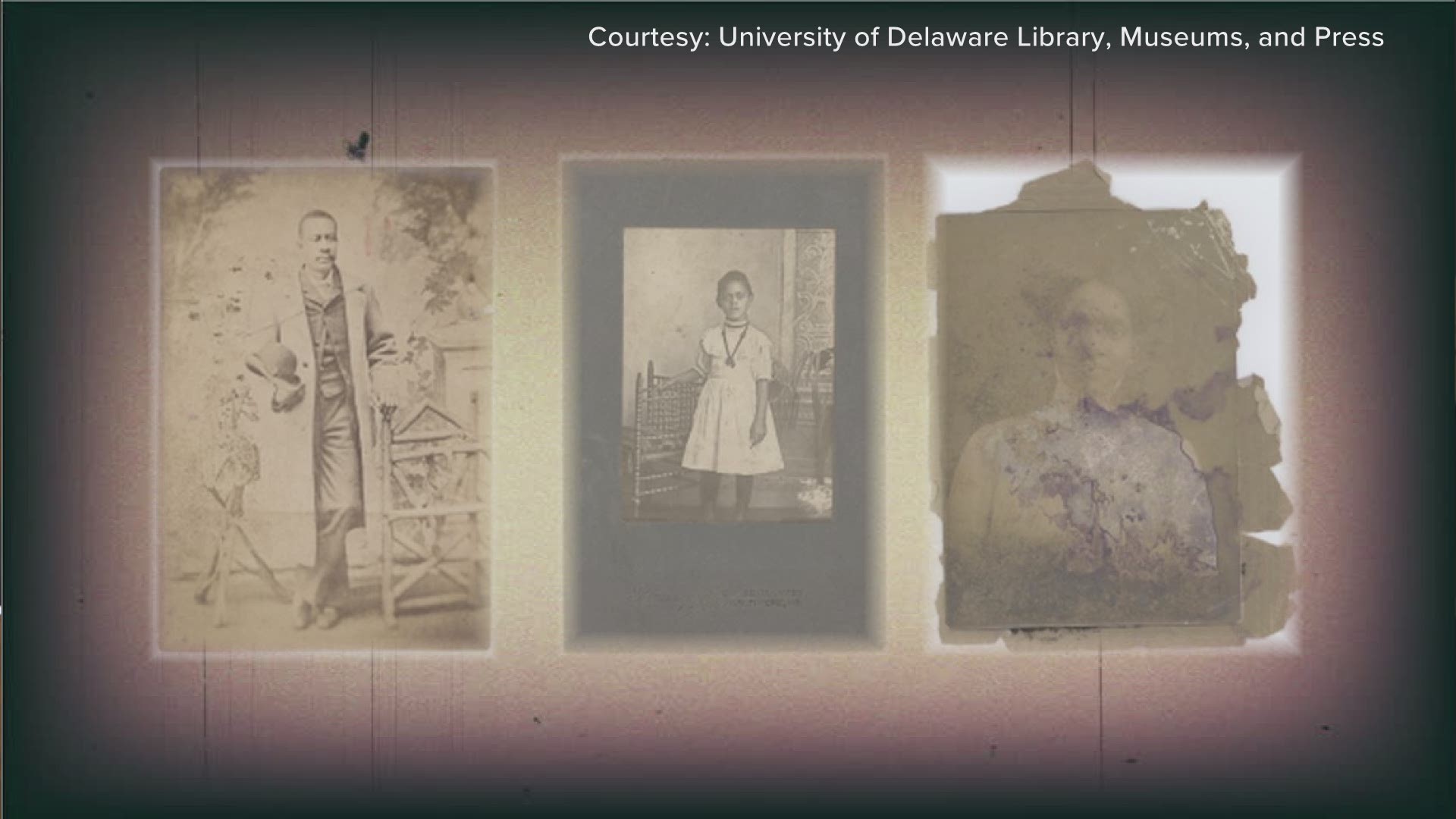 She soon discovered the value of the 53 pictures was worth much more than their label described.

"Someone’s mother, someone’s sister, someone’s aunt, someone’s son," McGee said, describing who the people in the pictures might be. "The photographs range from late 19th century to early 20th century. They represent largely portraits of women, with some portraits of children and men."

The photos had no names or descriptions, and were badly damaged.

McGee used the pictures to teach students how to preserve, archive and research a history object when there are not extensive details available.

RELATED: These skeletal remains may be the key to eliminating health disparities for black people #ForTheCulture

"It became a course in which we were able to teach them, not only about the history of African-American photography and vernacular photography, but about what happens when you digitize an object and put it out into the public and you have to describe what it is," she said.

Students and researchers used a series of clues, such as period fashion, hairstyles, stamps from photography studios and other characteristics found in the pictures to discover more information.

It was found that the people were most likely middle class, not from the same family, and mainly from Baltimore.

One student working on the project was able to use the data to map out the photography studios some pictures were taken in Baltimore.

There were also pictures proven to have been taken in New Jersey, Philadelphia, and at least one from D.C.

"The D.C. photo stands out to me," Jesse Erickson, an assistant professor of English who coordinates the university’s digital collections, said. "It’s a lovely photo because it features a woman and two children. They’re sort of in their Sunday best. They are looking great. It's just, it’s a powerful image."

RELATED: Black vs. African-American: The complex conversation black Americans are having about identity #ForTheCulture

He found the image powerful, because the images would have been taken just years after slavery ended in America.

The late 1800s and early 1900s was a period when racism, segregation and discrimination were running rampant.

Credit: Copyright Museums Collections, University of Delaware Library, Museums, and Press
A full-length portrait of woman, seated in a wooden armchair, with two children. All three are facing the photographer, but both children appear to be looking to the right. The older of the two children stands to her right. His right hand rests on the left arm of the chair. A younger child sits on the woman’s lap. The woman is wearing a white blouse with a collar and a dark colored skirt, white stockings, and dark laced shoes; her hair is pulled back from her face. The older child on the woman’s right is wearing a white sailor suit, a popular clothing style for young boys in the mid-to-late 19th century. The boy's shirt features a wide, squared-off collar (probably blue in color) with white striped detailing. He is also wearing white shorts, white stockings, and dark colored shoes. The younger child appears to be wearing a white shirt and shorts, as well as dark shoes, which extend just past the child’s ankles. The background of the photo is difficult to make out, but there appears to be a mantel and drapery. The photograph is mounted on cardstock with an embossed scrollwork design around the perimeter of the mount. The photography studio’s name and address is stamped on the verso of the photo, “B. W. Stein Studio, 1827 7th Street N.W., Washington D.C.” The photograph is in poor condition with some light, mold, and dirt damage. The bottom left corner of the mount is torn.

He said African-American people were often depicted as impoverished and uneducated.

"These pictures tell a different story," Erickson said. "It shows us an example that we did live with dignity and we did live with a certain level of civic responsibility as portrayed through these images. I think it is really important for us to reclaim that."

Students who worked on the preservation project created a website which contains professional assessments and personal expressions.

The University of Delaware is now hoping to reunite those pictures with their families and learn more about the people depicted in them.

CLICK HERE to explore the full archive of photos in the Baltimore Collection.