School resource officers would remain in school by Maryland law. 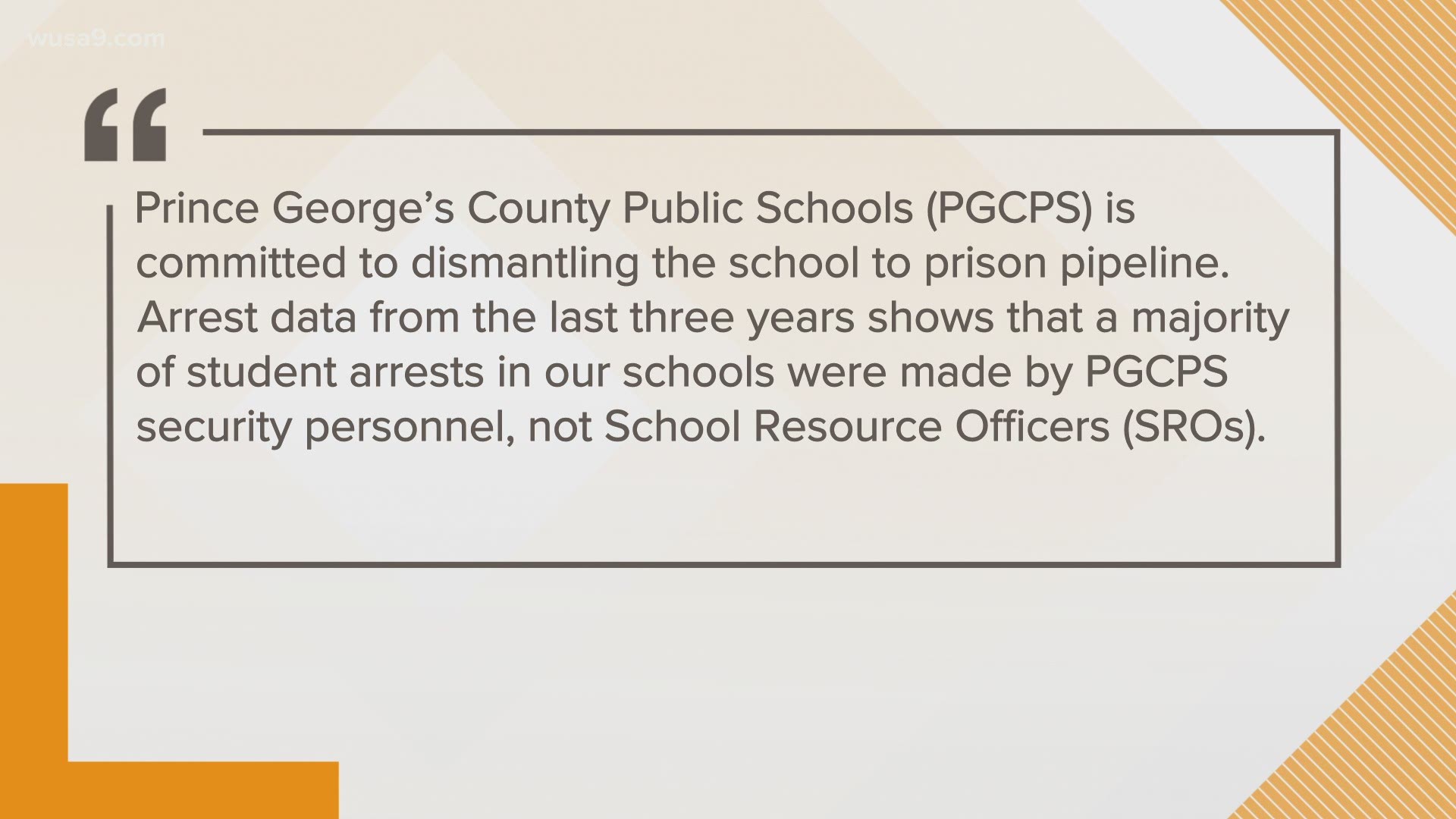 PRINCE GEORGE'S COUNTY, Md. — There’s a battle brewing in Prince George’s County. The school board will soon vote on whether to remove police powers from the security personnel in middle and high schools throughout the district. Right now, the school district employs just over 200 security people, 66 of them have the power to arrest students. Now, the district is looking to change that.

The biggest difference is that School Resource Officers (SROs) are employed by the Prince George’s County Police Department, School Security Personnel are not, but they do have some police-like training. The district’s concern is the number of arrests made by those school investigators.

“Prince George’s County Public Schools (PGCPS) is committed to dismantling the school to prison pipeline. Arrest data from the last three years shows that a majority of student arrests in our schools were made by PGCPS security personnel, not School Resource Officers (SROs). Following a survey of the PGCPS community and recommendations from the Prince George’s County Police Reform Workgroup, we plan to reduce security personnel with arrest powers while continuing our investments in mental health programs and restorative approaches to student discipline.”

The proposal on the table is to suspend the security personnel’s arresting powers and redirect funds to support mental health enhancements. But investigators say their job is not centered around arresting students, but building and nurturing relationships and that a lot of them have mental health training.

#GetUpDC, this morning we're hearing from an Investigator who works for @pgcps about his concerns with their arresting powers potentially being stripped and hearing from the District on why this is the current proposal. .@wusa9

One investigator who spoke with WUSA9 wanted to remain anonymous. He said while the data may show higher arrest numbers, they do not handcuff students, and typically their arrest is a paper formality. He argues this will have the opposite effect of what the school is intending to do, and that SRO's arrest numbers would just go up.  He also said no one who fully understands their role has been a part of the decision-making process to strip them of their powers.

“When they go talk to other people, they can't articulate what we're doing because they actually don't know enough. But I think that they need to start grooming and building up and hiring within, so people can articulate what we do and get the word out. We’re overshadowed, and people are misinformed because our leadership, who's speaking to other leadership, don't know enough. And that's one of the major problems.” the investigator said.

It’s also worth a mention that the Maryland Safe to Learn Act of 2018, requires public high schools to have either an SRO or adequate law enforcement at public high schools. In Prince George’s County Public Schools, they would still be keeping SROs by law.

RELATED: 'We have the money to do it' | Maryland gets over $1 billion for schools as debate continues over reopening