Passenger in NSA incident questions police use of force

A 24-year-old Southeast DC man who says he was the passenger in that SUV that crashed at an NSA gate last Wednesday, is questioning police use of force. 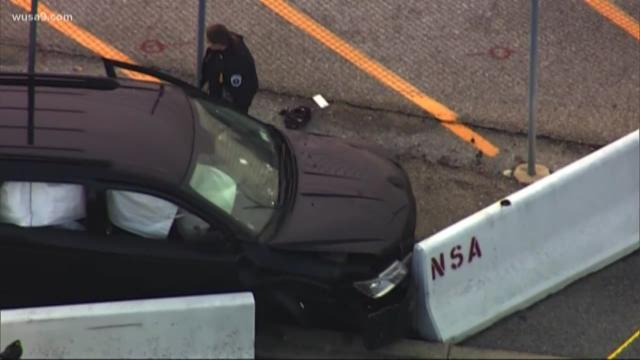 Javonte Brown, a 24-year-old man from Southeast DC, says he was the man asleep in the passenger seat of a black SUV, when he woke to "everything in chaos."

The SUV had bullet holes in the windshield and had crashed into a barrier. It appeared as though the driver was trying to exit Gate 1 at the heavily-guarded National Security Agency in Fort Meade, MD last Wednesday.

The scene caused such an alarm that even the President was notified.

Brown asked his face not be shown in the Sunday interview.

"They was meant to kill us,” said Brown, “You know what I'm saying? This was fatal shots they were shooting. They could've killed him. They hit him in his head. If I didn't grab him and throw him under the wheel, little man would've got killed."

The “him” is a 17-year-old, reportedly unlicensed driver, Brown says he put behind the wheel because he and another passenger were too tired to drive. After shots were fired, Brown says the teen was grazed in the head with what was believed to be a piece of shrapnel.

It was just after 7 a.m. Wednesday when authorities say the SUV tried to enter the NSA gate without authorization. Brown says they were on their way to Maryland to visit his brother when the teen woke him up.

"He was panicking, telling me, 'Oh I made the wrong turn, I don't know what to do – I don't know what to do,” said Brown, “Immediately when I woke up, I knew where we was at. I seen rocking back road and I knew - I recently worked there with the state contractors, so I knew we was on the base. So I'm asking him, 'Why you not stopping?"

Brown tells WUSA 9, “By that time, you know what I'm saying, we was already taking fire on the window shield."

The 24-year-old himself has an extensive record that includes license charges.

“I accept full responsibility in putting him behind the wheel, but I didn't think anything of it,” said Brown.

He also says, “"They could've came and approached him differently and told him you don't belong on the base...I don't know how they let him through the gate. It was something they did wrong when they in – somebody wasn't doing their job."

WUSA 9 reached out to the FBI and is still waiting to learn official details of the incident.

WUSA 9’s Scott Broom learned authorities were investigating the possibility of a panicked driver making a wrong turn through sources.

Brown says he and other the two others involved have not been charged in this incident.

An FBI Field Agent had said last week a on-looker and a NSA officer were also injured. Both sustained non-life threatening injuries.