The utility is suspending disconnections and late fees while trying to address an avalanche of complaints to regulators about poor customer service. 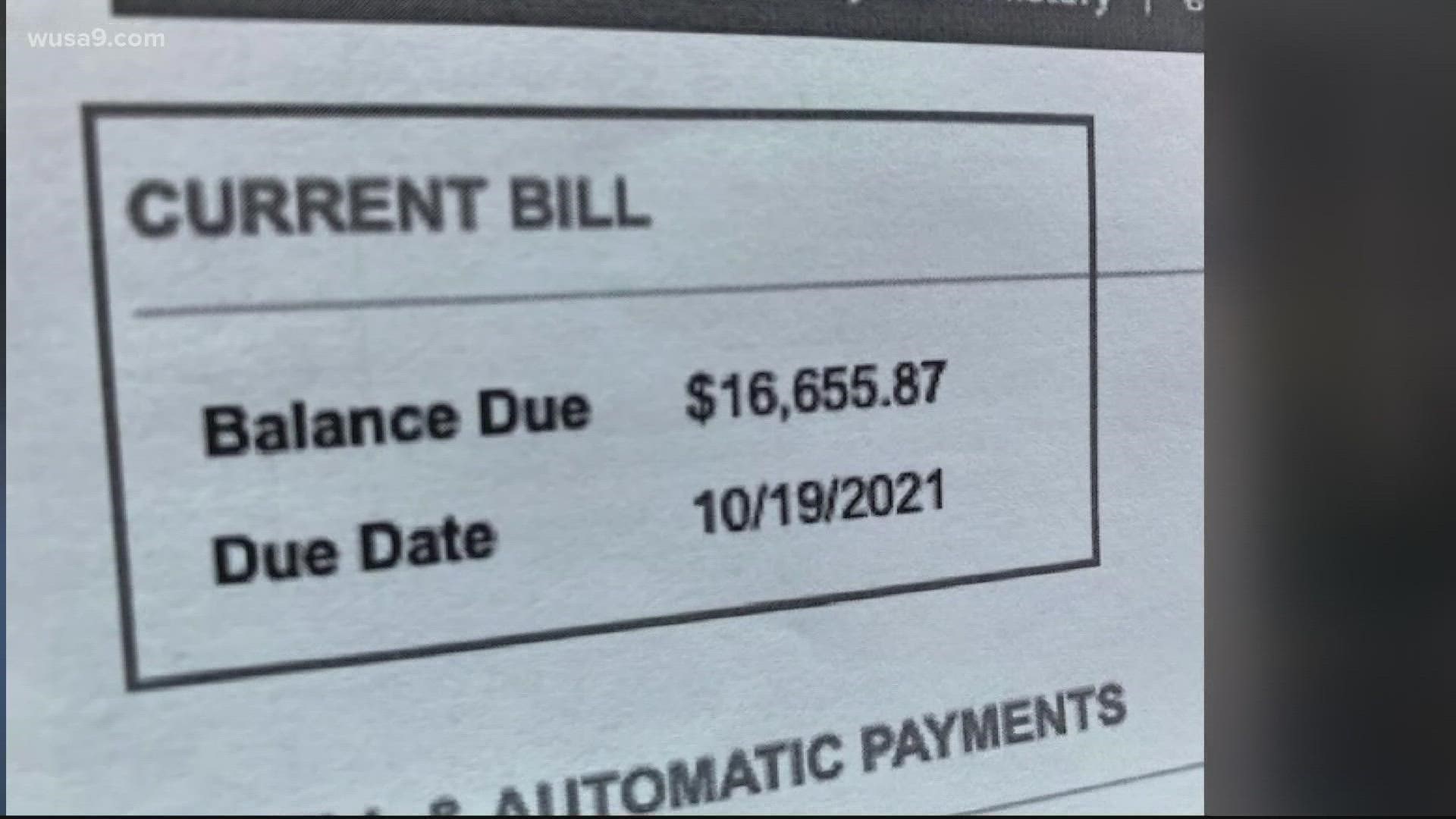 ROCKVILLE, Md. — Its been nearly six weeks since Washington Gas was forced to apologize to its customers for failing to handle even the most basic complaint calls.

At the time, the company promised to do better. But in Rockville Tuesday morning, one woman hit the ceiling when she opened a bill for more than $16,600.

Since she says she can’t get Washington Gas on the phone, she called WUSA9.

Tiffany Rodney says there’s no way she and her family have used the amount of gas in their colonial-style suburban home that Washington Gas is claiming.

"Today when I received the $8,000 bill, I was shocked, and then I went online to the Washington gas consumer portal and I saw that my actual balance was over $16,000,” Rodney said.

Rodney says she has been unable to get anyone at Washington Gas to help.

"It's been very frustrating," Rodney said. "I would sit online for 45 minutes one day it was an hour and 20 minutes and they just never picked up.”

Rodney says she’s worried gas might be leaking somewhere. But she has not called in an emergency because there’s no odor of gas.

She’s complained to Maryland’s Public Service Commission which reported in a statement:

“The Commission's Consumer Affairs Division has, in recent months, seen an increase in complaints about Washington Gas, mostly regarding an inability for customers to reach the utility by phone or get a response by email.”

Washington Gas issued an apology on Twitter on August 23 after similar complaints.

To our valued Washington Gas Customers: ​Increased volume to our call center and social media channels may result in delays for responding to customer inquiries. We apologize for the inconvenience and appreciate your patience as we navigate upgrades to the customer experience. pic.twitter.com/GFpeYWIhGf

According to Rodney’s bills, it appears the trouble started back in May 2020 when Washington Gas claimed her gas usage suddenly jumped to ten times normal despite the weather being warm and the heat in her home being turned off.

Rodney reported the extreme bills didn’t come until she got off a budget billing program that was smoothing out the spikes.

Responding to WUSA9's inquiry, Washington Gas reported Tuesday evening that the billing was a meter reading error, according to an email from Washington Gas spokesman Brian Edwards.

"We have looked into the issue and determined that the reason for the billing mistake is due to a meter reading error. We did dispatch a technician who discovered the error in July," Edwards wrote.

"The correction to her bill was not processed. We will process the correction and the customer will receive an updated bill next month. In addition, we will reach out to the customer by telephone to apologize and to explain how we are correcting the situation."

"Our technician did inspect the meter and would have discovered a leak if there had been one. If there had been a leak inside her home, she would have smelled gas. We ask any customer who smells gas to immediately call 911 and our emergency call center at 844-WASH-GAS 24 hours a day, 7 days a week. We respond around the clock to any reports of gas odors to ensure that our customers are safe."

More information on natural gas safety can be found on the Washington Gas Website.

The Director of Montgomery County's Office of Consumer Protection says the agency will help consumers attempt to contact Washington Gas.

"When consumers send complaints to our office against Washington Gas we contact the utility and Washington Gas generally responds to the consumers," said OPC Director Eric Friedman.

Freidman recommends that customers learn how to read their own meters.

"Washington Gas provides a resource on how to actually read the meters, which many homeowners may not know how to do," Friedman said.

"One interesting tip that consumers may be unaware of is that residents can submit a request to the PSC for a “referee” testing of the meter. This may be helpful if residents don’t trust the utility company to provide fair meter tests."

The MD PSC has a helpful resource for utility billing disputes.

RELATED: Your gas stove, furnace, and clothes dryer may be hurting the climate and polluting your home

Gas used for cooking, clothes drying, and for heating accounts for 23% of the city’s greenhouse gas emission, by the city’s own count.