Lobbying from teachers helps save Maryland schools from millions in cuts

The Board of Public Works did slice $413 million from higher ed., health and more in response to the economic crisis brought on by the coronavirus pandemic. 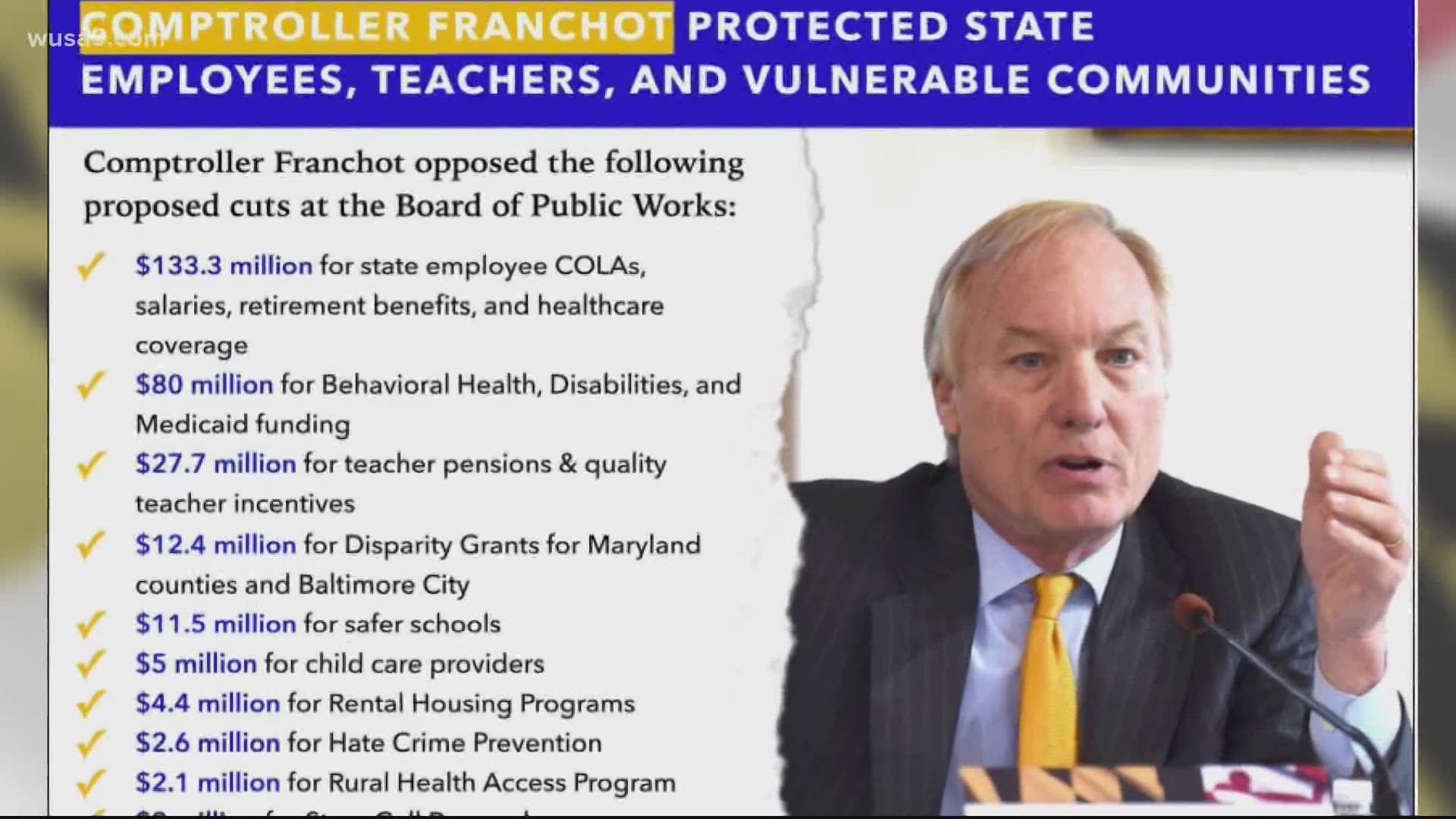 BETHESDA, Md. — The Maryland Board of Public Works cut $413 million from the state budget Wednesday to help deal with a nearly $1 billion shortfall in tax revenue blamed on the coronavirus pandemic.

The Hogan Administration had proposed immediately slicing $672 million from the total state budget. But State Comptroller Peter Franchot (D-Maryland) objected to about a third of the administration cuts. And Gov. Larry Hogan (R-Maryland) ended up going along, agreeing to defer the difference at least for a while.

Maryland is projecting a $925 million tax shortfall this fiscal year. Next year, if the economy fails to rebound sharply, it could be $4.6 billion.

Gov. Hogan said the state has to start cutting immediately. The alternative, he said, would be laying off more than 10,000 state workers.

"We'd have to take a hatchet instead of a scalpel," he said. "Sadly, as painful as these cuts are, the alternative to not taking action is much more severe," Gov. Hogan said.

The state Department of Budget and Management proposed hundreds of millions of dollars in cuts to higher education, to health, to schools, to public safety, and to cultural institutions.

RELATED: Hogan may not have the votes to cut $672 million from Maryland's budget

The three-member Board of Public Works and Comptroller Peter Franchot, who plans to run for governor, deferred $205 million in proposed cuts to state workers' salaries and pensions, behavioral health and to teacher pensions and performance incentives.

"No matter what model we look at for reopening schools, whether it's distance, in person, or hybrid, it costs additional money," said Cheryl Bost, a Baltimore County elementary school teacher and head of the Maryland State Education Association.

"Maryland is very fortunate, it's better off than many states," Kopp said.

In the end, the governor and the comptroller prevailed. The Board voted two to one to start cutting immediately, with Kopp voting no.

But instead of $672 million in cuts, the state will cut $413 million effective immediately. The governor said the Board will how to figure out how to make up the difference soon, or Maryland will still have to eliminate 3,157 jobs.

Gov. Hogan has been lobbying the White House for more federal help for state and local governments. He said around the country, some 1.6 million state and local workers have already been laid off. But he said that number right now for Maryland is zero.

RELATED: Maryland coronavirus updates: Gov. Hogan warns 'Crisis is not behind us'