Police said the incident happened while officers tried to arrest a man wanted for a murder in Florida. 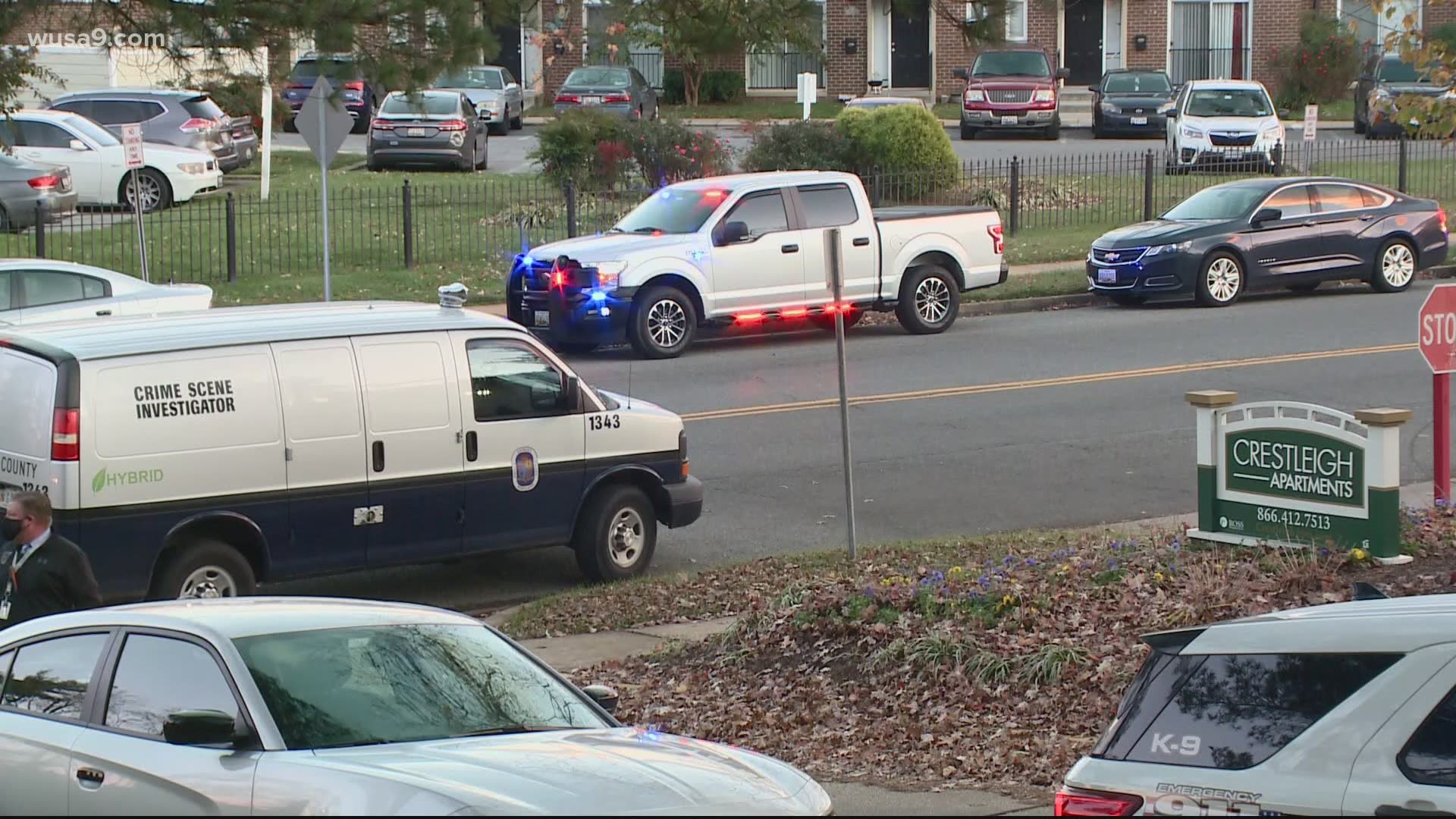 LAUREL, Md. — A man has been killed and a police officer is injured after shots were fired when Montgomery County police tried to arrest a suspect they say is wanted for murder.

The shooting happened Tuesday afternoon in Laurel. Officers could be seen setting up police tape in a parking lot outside of some residential townhomes and apartments near Muirkirk Road.

Montgomery County police said in a tweet that an officer was shot by a suspect they were attempting to arrest for a homicide that happened in Jacksonville, Florida.

Multiple officers from Montgomery County were involved in the shooting, the department said.

Police Chief Marcus Jones said during a press conference that his officers were fired upon when they tried to arrest the homicide suspect, and he said his officers returned fire.

"A chase ensued with a gun battle," Jones said. "The suspect was wounded and succumbed to his injuries on the scene."

The officer shot is in stable condition after getting out of surgery, the department said in a tweet late Tuesday evening. The officer has been identified by Montgomery County Police as Donnie Oaks, a 20-year veteran of the department.

The officer who was shot earlier today is out of surgery and is in stable condition. Thank you for your continued thoughts and prayers.

First Coast News, a fellow Tegna station based in Jacksonville, told WUSA 9 that a law enforcement source confirmed the suspect to be Shawn Braddy.

Braddy was considered "armed and dangerous" following a shooting that occurred on Monday.

According to her family, McDaniel was shot and killed as she held her 5-year-old child.

Her family added that McDaniel had recently moved in an effort to get away from Braddy, who they claimed had a past relationship with her.

On Tuesday, neighbors who live near the scene of the shooting were stunned after hearing about the case.

"It’s hard to understand why someone like that will be around here," said Adeola Ajayi, who moved to a nearby apartment complex six months ago. "It’s scary and I’m still trying to understand why this is happening so close to home.”

Ajayi told WUSA 9 that the apartment complex is home to many families, which added to the danger of Tuesday's shooting.

Eddie King, who lives at the complex with his fiancé, could see the police tape from his home in the evening.

"Our bedroom window faces where the shooting happened," he said. "She (his fiancé) heard the gunshots.”

"I feel bad and I hope the cop that got shot is okay," he said. "My prayers go to his family.”

Jones did not specify where the officer was shot, referencing the "upper body" in general. The officer's condition is not known at this time.

"Right now, I will tell you, I'm on edge because I want to make sure he is ok," Jones said when asked how he felt that his officer had been injured. "Once I leave here I will be heading to the hospital to check on his condition but I ask that the public keep him in your prayers, because at this time, this is an officer who was taking a very dangerous individual off our streets."

Prince George's County police have tweeted that they are taking over the investigation and further updates.

Jones said that Montgomery County officers were involved in the shooting in Prince George's County because they are part of a U.S. Marshal's Task Force, and have the ability to work outside their jurisdiction throughout the state of Maryland.

"We were made aware that the individual we were looking for in connection to a deadly shooting that happened early Monday morning in the Oakleaf area was shot and killed by law enforcement in Maryland," Clay County Sherrif's Office spokesperson Laura Shassberger said in a statement. "We also understand an officer was injured in that shooting. Our thoughts and prayers go to that officer and his family during this time. Our thoughts are also with the family of the victim. We are still investigating, and at this time, we are not releasing any further details." 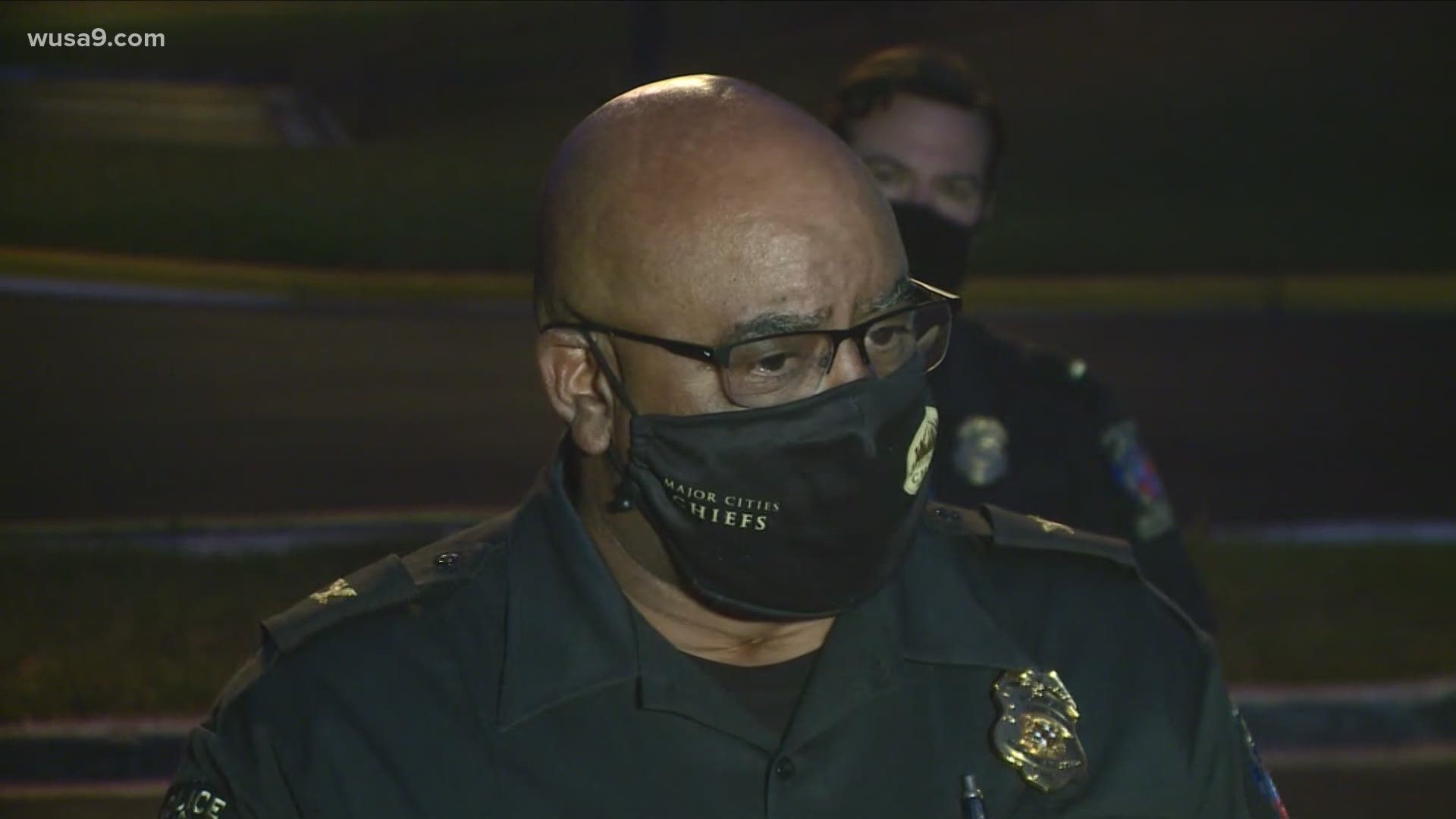 WUSA9 will continue to follow the story as more information comes into our newsroom.