Relatives of residents at Sagepoint Senior Living Services Center in La Plata, Maryland are calling for more transparency from management about coronavirus cases. 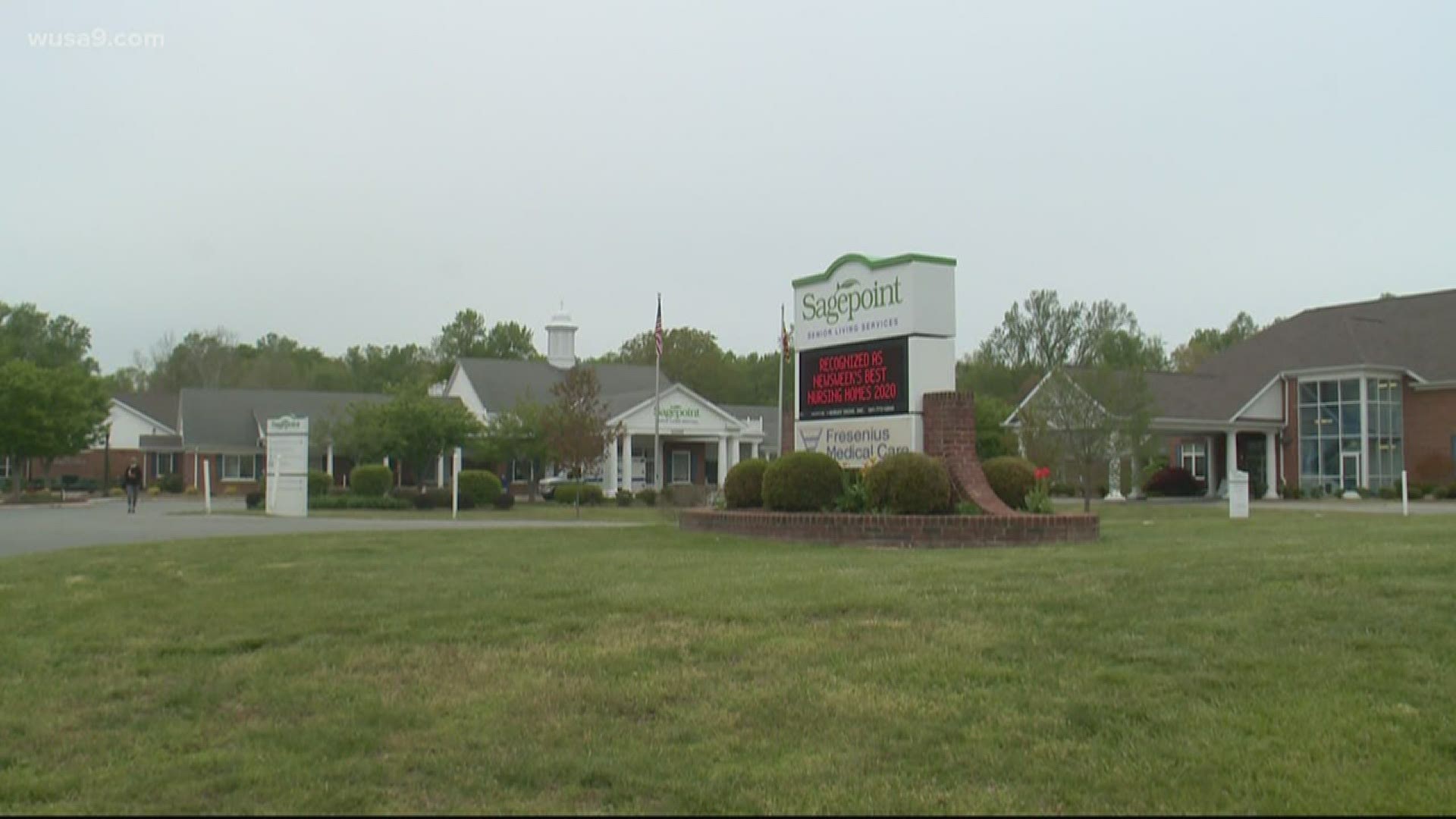 LA PLATA, Md. — As the coronavirus sweeps through nursing homes, family members are calling for transparency when it comes to their loved ones.

Joan Bryan said her 80-year-old father, William Goldsmith, died of COVID-19 on Friday. She said he had multiple health problems, including respiratory and cardiac issues, but was full of life.

She said he died at Sagepoint Senior Living Services Center in La Plata, where Goldsmith had been living since June 2019. She said her dad moved in after losing a leg to a nerve disease.

Bryan said the center first told them about a coronavirus case on March 30, in a patient who had been sent from the hospital. In a website update, the facility said it could not confirm whether or not the person had contracted the virus at the center. So far, that is the only case management has confirmed.

"My first thing was oh my God he’s a sitting duck, because we know he has respiratory issues and other things, and he’s not going to be able to survive this," Bryan said.

Bryan said at first nurses told her he didn't have symptoms, but on Friday, she said he was taken to the hospital.

“The ER doctor called me [and said] all we can do is send him back to Sagepoint and put him under comfort care, so you might want to make some plans," she said.

Bryan said she and her sister rushed to Sagepoint to say goodbye. She said the facility was allowing family members to visit when they were at the end of their lives. She said they provided PPE at the door.

“Walking down that hallway … it was like a horror movie," Bryan said. "The people in their beds, I mean, they were just comatose. They were out of it. Some were screaming help! Help! And the staff was scarce. My dad kept reaching out to me.”

She said he died an hour after she and her sister left.

Other people with relatives at Sagepoint shared similar stories in a Facebook group they created to connect.

"It’s amazing how many people have reached out to me and have the same concerns," Bryan said.

Her latest concern is retrieving her dad's personal belongings, which she said has been a struggle. Bryan said multiple calls to the facility have been left unanswered.

Bryan and other families said they're primarily asking for one thing: transparency.

“Keeping families informed helps with the grieving, the worry, you know to know what’s going on in there," she said.

Sagepoint's CEO Andrea Dwyer answered some questions about the nursing facility's day-to-day operations in a video posted to YouTube.

"We worked tirelessly with all county, state, and local officials to make sure that we were following all of the guidelines," Joyce Riggs, a Sagepoint spokesperson said.

Dr. Howard Haft, the Executive Director of the Maryland Primary Care program with the Maryland Department of Health, said they are still not releasing case numbers for Sagepoint to protect privacy. However, Dr. Haft confirmed that Charles County has seen 101 cases of COVID in residents at long-term care facilities.

Dr. Haft said he and an outside infectious disease expert visited Sagepoint to see whether or not they were following protocols.

“They’re absolutely doing everything we’ve asked them to do in terms of best practices," he said.

Dr. Haft praised the nursing staff who have reported to work daily to take care of these patients.

“The big point to me is the staff who work in these facilities are really the unsung heroes. These are the people who have been giving selflessly of themselves to provide care for these individuals in these long-term care facilities," he said.

Bryan agreed, tearing up as she talked about the nurses who cared for her father.

“The nursing staff, you know those gals that took care of him all these months ... They have been so good to him. They’ve been so good to us," she said. "We don’t fault them in any way. They’re working with what they have, but management’s not helping them.”

She said she wants management to be more communicative with families throughout the process, so they don't feel like they're on their own.

“It’s not going to bring my father back, but going forward, there needs to be a lot of improvements that will help the people that are there, so they don’t have to go through this," Bryan said.

She asked why Maryland hadn't sent a strike team to the facility to help. WUSA 9 asked Dr. Haft, and he said they're designed to provide temporary help, as in a few hours to a day. He doesn't believe Sagepoint's situation calls for it.

Dr. Haft also said they hope to be able to release details on where the cases are in the coming week.

RELATED: Want to know how many COVID-19 cases are in a MD nursing home? That data likely won't be released

RELATED: Bowie nursing home resident dies of coronavirus a week after sharing her worries from inside