The son of former University of Maryland football coach Mike Locksley was killed in a shooting over the weekend, police said. 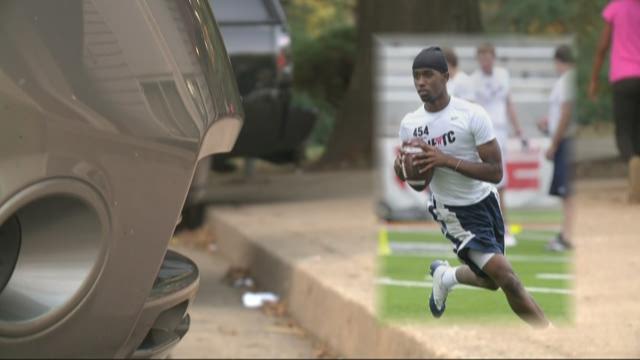 The son of former University of Maryland football coach Mike Locksley was killed in a shooting over the weekend, police said.

According to Howard County Police, 25-year-old Meiko Locksley died after he was found with gunshot wounds at 10:30 p.m. Sunday in Columbia, Md. in the 5500 block of Harpers Farm Road.

Meiko Locksley was transported to the University of Maryland Shock Trauma Center, where he later died.

A young mother who did not want to be identified said she called 911 because the shooting happened right outside her front door.

“My daughter and I just came home from a Labor Day barbecue, it was like 10:10 Sunday night. No one was around and it was quiet. About 10 minutes later I heard one gunshot,” she recalled. “I looked out my window through the blinds and saw him lying there bleeding, but I didn’t see anyone else.”

A message left with Howard County Police was not immediately returned on Monday.

Police have no additional information about a possible suspect or motive at this time.

Locksley was a rising football star who played high school ball in Illinois, then at several junior colleges—including Towson University near Baltimore and Lakawanna College in Scranton, Pennsylvania.

However, it appears Locksley struggled with a violent past. Court records show a history of assaults and disorderly conduct. He lived just blocks from the murder scene.

Locksley’s father Mike Locksley holds two roles at the University of Alabama: wide receivers coach and co-offensive coordinator. Locksley is a Washington native who served two stints as an assistant at Maryland.

"Our thoughts and prayers are with the family,” Alabama head coach Nick Saban told reporters on Monday.

Investigators are seeking information from anyone who may have been in the area and heard or seen something around the time of the shooting. Anyone with information about this incident should contact police at 410-313-STOP or HCPDcrimetips@howardcountymd.gov.