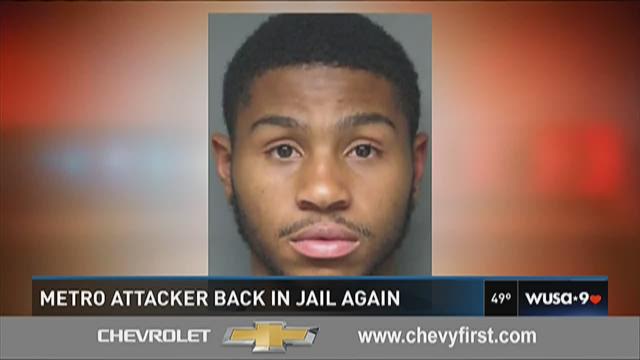 Elijah Jeremiah Smith may finally be out of chances with D.C.’s criminal justice system.

Smith made headlines in 2015 when he was caught on surveillance video knocking out a 69-year old man with a series of punches on a metro escalator.

The 19-year-old D.C. resident was already on probation at the time he was arrested and charged in that attack, and after picking up another assault charge while awaiting trial, eventually received a seven month jail sentence, plus probation.

As a teen with a relatively minor criminal record, Smith was sentenced under the controversial Youth Rehabilitation Act.

Free from prison, but still on probation, Smith likely blew his second chance in January.

A review of MPD and court records by WUSA9 shows Smith was arrested three times in a less-than-two-week stretch in January, charged with two assaults and one assault with a deadly weapon.

The first and third arrests occurred outside Clyde’s bar, near the Verizon Center.

On January 7th, MPD officers arrested Smith after a man said he was sucker-punched in the face by him “without warning.” Smith appeared in court the next day, and was released pending his next hearing.

On January 13th, MPD officers arrested Smith at the Gallery Place metro station. Smith matched the description of a man who attacked a metro rider by punching him repeatedly in the face and pressing his face into the metro platform at Brookland. A judge released Smith the next day, pending his next yearing.

On January 18th, MPD officers again encountered Smith outside Clyde’s bar. This time, an officer watched as Smith pulled a knife on a Clyde’s employee who was trying to remove him from the premises. This time, Smith was charged with assault with a deadly weapon.

A judge ordered him held in D.C. jail pending his next court hearing.

Smith’s attorney, Todd Baldwin, said his client has pleaded innocent to all three January assaults, and offered no further comment.