Professional athletes inspire millions of kids around the world. 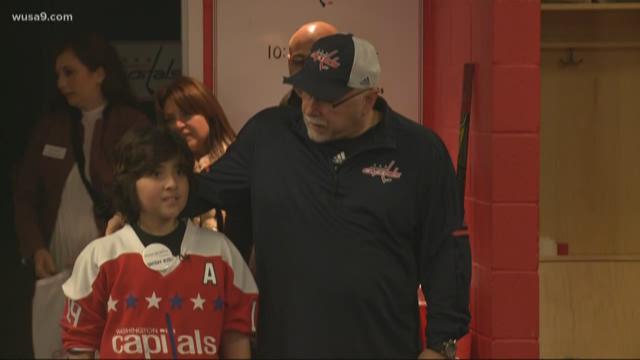 Professional athletes inspire millions of kids around the world. Today it worked the other way around. Meet Dariush. The Bethesda is an 11 year-old fighting cancer. As a part of the Make-A-Wish Foundation, he got an opportunity of a lifetime- hanging out with the Washington Capitals.

The day started with a limousine dropping Dariush Namin and his family off in front of the Capitals practice facility. The Make-A-Wish Mid-Atlantic representative led them in while giving them high-fives.

Before practice, coach Barry Trotz introduced Namin to the team in the locker room. He told them, "He's gonna be with us at practice today and he's gonna get the opportunity to drop the puck tomorrow."

Namin's eyes sparkled as he heard this. He had no idea he would get to drop the puck at Thursday's game and do with his favorite player. That's a pretty sweet deal I would say.

He looks in great shape now. But last January he felt pain all over his body. Doctors told his parents he had leukemia, a type of blood cancer.

"It's like somebody stuck a knife in your heart," Namin's father Frances said upon hearing the news. "That knife has been there for a very long time."

His mom was astonished at the progress Namin's made since then.

"Six months ago he was in so much pain, he could barely walk," Nooshin commented. "To see him today to be able to participate in this--I have no words to describe it. It's a miracle."

Wednesday brought so much happiness to Namin. His parents told me he's usually talkative. But he was speechless meeting his idol. A Caps fan for almost half his life, player signed HIS jersey, he chatted with them, and watched practice in a hockey helmet. His smile was contagious throughout the facility.

"All he has to do is smile and that's it," Frances said with a big smile. "When I see a smile on his face, he inspires me."

While Dariush wasn't full of words, he did know what the best part was?

"Hmmmm, Nicki," he exclaimed in the locker room. He's referring to Nicholas Backstrom of course.

The battle still isn't over for Dariush as he continues to get active treatment but there is a huge village supporting him.

"And I think it's going to help a lot that he has our support," Backstrom told reporters after practice. "We've got his back."

His biggest supporter is probably his parents.

"Oh my gosh," Namin's mom belted out. "I'm so proud of him. He's amazing. He's like my litttle hero. He should be an inspiration to all.

That makes sense with Namin's attitude.