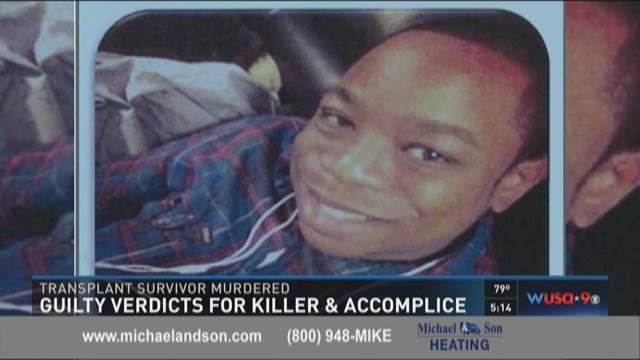 SILVER SPRING, Md. (WUSA9) -- The killer of a two-time kidney transplant survivor was found guilty in a Rockville court Monday.

Dion Sabotker beat, robbed and left 26-year-old Jonathan Harris dead in the basement apartment of his family’s home in December 2014.

Unfortunately, Jonanthan was all too familiar with death. When the kidney his brother donated him failed, his mom entered a kidney exchange program, giving her kidney to a complete stranger so her son could get one in return.

“I gave to see that my son be given another chance at life,” said Patricia Harris, Jonathan’s mom.

Jonathan responded positively to his third kidney in less than three decades. He was attending Montgomery College and planned to transfer to Elizabeth City State University, the same college his mother graduated from.

“[Jonathan] was my eagle,” Patricia told WUSA9. “I saw him fly against all odds.”

Jonathan, like his brother, was musically inclined, performing as a disc jockey in D.C.

“It was his escape when he had to deal with his sickness and illness,” said Lloyd Harris, Jonathan’s brother.

Investigators believe that Jonathan’s disgruntled ex-girlfriend, Samantha Parker, orchestrated the attack that led to his death. Police found Jonathan bloodied and beaten, with a belt tied to his wrist, an apparent attempt to bind his hands.

Jonathan was living in the basement of his mother’s house. But they agreed to treat it as his own apartment. According to Patricia, it was the best way, under the circumstances, for her son to continue to mature.

Latoya Morgan was also arrested in connection with Jonathan’s murder. She plead guilty to “accomplice after the fact.” The conviction carries a maximum five-year sentence. She is scheduled to be sentenced Friday.

Police linked all three to the crime after surveillance video captured Parker, Morgan and Sobotker using Harris’s credit card shortly after his murder.

In December, Parker died in jail of a brain tumor. And Sobotker is scheduled to be sentenced in May for first-degree murder, robbery and conspiracy to commit robbery. He faces life in prison.

“I feel a sigh of relief,” Patricia said. “I feel that I got justice for my son.”