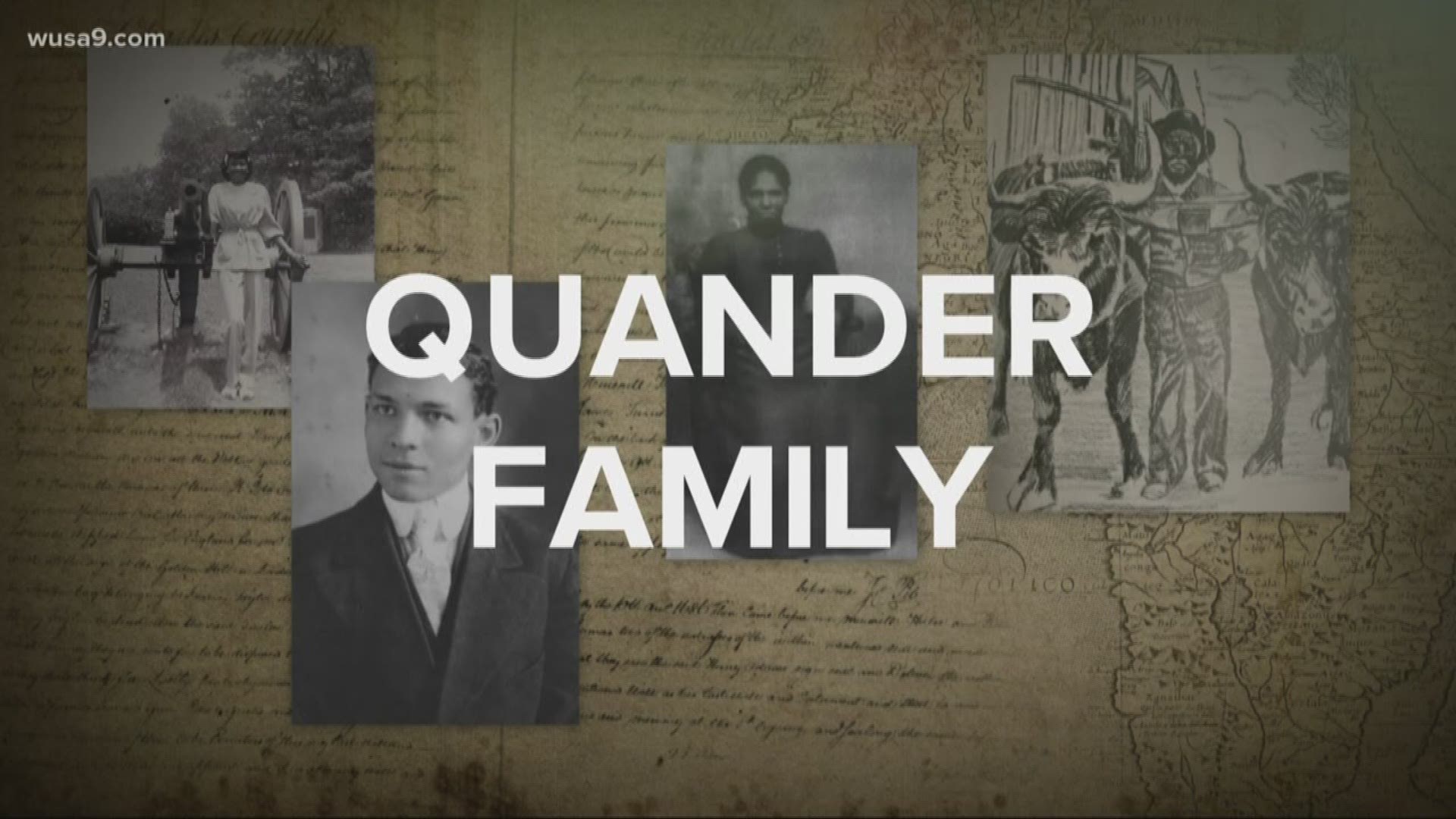 WASHINGTON — For many African-American families, genetic testing is one of the only ways to know exactly where they came from.

The Quander family is one of the oldest documented black families in America.

The D.C.-area based family can trace their history in the United States back more than 330 years.

"Within the Quander family, we have known our history in the United States for quite some time," said Rohulamin Quander, with the Quander Historical and Educational Society.

It is uncommon for many black Americans to have knowledge of their pasts in the United States because slavery ripped families apart.

RELATED: Finding Quander: The journey of one of America’s oldest documented black families

Enslaved people lost just about everything, including details about their identities.

The Quander family was one of few families to keep its name despite the adversities of bondage.

Oral history allowed Quander family historians to trace the surname to the Amkwando family in present-day Ghana where ancestral relatives validated the connection between the American and African families.

As a Quander born and raised in Washington, D.C., I had the opportunity to explore my family’s history in November 2017.

The experience was emotional, enlightening, and empowering.

However, there were still parts of my genealogy I did not have documented answers to.

I hoped DNA testing would fill in some of the blanks that were missing from known family records.

"Using DNA technology has been eye-opening because it has allowed us to bridge the gap," said Gina Paige, co-founder of African Ancestry.

DNA, or deoxyribonucleic acid, is the hereditary material in humans and almost all other organisms, according to the National Institute of Health.

DNA is found in the core of our cells and contains so-called codes for our genetic information.

DNA can be found inside of chromosomes which we inherit from our mothers and fathers.

Women have two X chromosomes, and men have an X and one Y chromosome. Think of them as the packaging that carries DNA.

DNA determines everything from skin color to the characteristics of eyes and hair.

There are things in our DNA that do not change from generation to generation.

"People who share the same DNA and certain parts of the DNA share ancestry," Paige explained. "Once we find matching, closely matching, or even identical matches we then know you share a common ancestry with these people."

The Y chromosome test only looks at your father’s direct male family line.

Next, the Mitochondrial test only looks at your mother's direct family line. Mitochondria is a specific type of DNA that a person only inherits from their mother. Both men and women can take this test.

Lastly, SNPs allows you to explore a broad overview of your genetic makeup. The SNPs test has become most commonly used for many of the genetic testing companies because it helps paint a more comprehensive picture of a person’s ancestry.

All three tests operate by comparing results to others known lineages in a company’s database.

The comparison allows companies to estimate ethnic backgrounds and break down genetic information into percentages.

First Round of Testing

In September 2017, I hopped on the phone and computer to order a DNA test from AfricanAncestry.com hoping to confirm oral history and learn more about my father’s side of the family.

Remember, the Quander family had already done extensive research, and I was confident where my father’s side of the family came from.

African Ancestry was the only company I could find that has a large enough database of African DNA.

The minority-owned business, which operates out of Washington, D.C., advertises that it has the largest resource of African ancestries. The company's database contains more than 30,000 lineages from more than 30 countries and several hundred ethnic groups.

Those numbers mean genetic researchers at African Ancestry have the technology to trace ancestries to a country in Africa and to a group of people who live there.

After a few cheek swabs and mailing off my DNA test, the results came.

"There’s a sense of nervousness, a little bit of excitement, but I just want to kind of do it," I said at a table with my father, cousin, and Gina Paige from African Ancestry.

"I’m nervous, too," Paige said. "Because when they say that the, 'Quanders were taking our test,' I was like, 'but the Quanders know everything.'"

It is important to remember that oral history traces the Quander name back to the Amkwandoh family in Ghana.

I read the results, "We have determined that you share paternal genetic ancestry with the people in Spain today. Spain? OK, I wasn’t expecting that."

"What this is saying is that, genetically, we didn’t find any matches to your Y chromosome among African lineages," Paige explained. "The matches that we found were European, and the one that we found the most was among people living in Spain."

The African Ancestry test I took only looked at the Y chromosome.

"And we have pictures of them," Rohulamin Quander added.

Rohulamin Quander asked Paige, "If I were to take the same test, would I get Spain too?"

"If you have the same Y chromosome then it would come back the same," Paige responded.

The Quander family is broken up into four main branches, and it has long been believed we all come from the same root.

The four lines carry the same unique last name, but there has never been physical evidence to support the relationship.

My test can only speak for my branch of the Quander family. Still, I was stuck with a lot of questions: Spain? Where did that come from? And how does Ghana fit into the picture for me?

So, I went back and tested again.

RELATED: What are genetic testing companies doing with your DNA?

Second Round of Testing

This time I went with Ancestry DNA and 23andMe, which are two popular genetic DNA companies.

These businesses use the SNPs testing method to get their DNA results.

This is the type of test that breaks down your entire ethnic background instead of focusing on one parent’s direct family line.

I mailed off both kits and got the results in two separate emails.

First, Rohulamin Quander and I opened the findings from Ancestry DNA.

"I'm so nervous. I'm messing my password up," I said while anxiously accessing my computer. "OK, I’m in there. OK, so you can tell I'm a little nervous, huh?"

I began reading the results.

"Oh, wow. Oh, OK. There is some Ghana there. That’s what I was looking for first," I said.

"Yes, you’ve got Ghana," Rohulamin Quander read from the laptop.

"Ivory Coast. Nigeria," we called out.

"West Europe is 3 percent. (The) Iberian Peninsula is 1 percent," Roulamin Quander noticed. "You see. this is what she (Gina Paige) was explaining. You can have a marker. When you did it last time the Spanish part came up, but now we have a breakdown."

Ancestry DNA found most of my heritage to be from Nigeria.

The Ivory Coast and Ghana accounted for 14 percent, and Cameroon and Congo were the next largest at 10 percent.

The Iberian Peninsula, which is where Spain is located, showed up as a small percentage.

Next, we opened the email containing the results from 23AndMe.

"So, this is interesting. These are a little different," I said.

Rohulamin Quander laughed," It is a little different, but guess what?  You are still African."

At the time we first got the results from 23AndMe, the findings were less specific as Ancestry DNA but still placed my primary ancestry in West Africa.

Fifteen percent of the West African ancestry was found to be "Coastal West African," which is where Ghana is located.

Nearly 19 percent, of the results were European, and 0.1 percent of that was on the Iberian Peninsula.

"Yeah, Bantu, so you are clearly an African," he said. "Are you happy now?"

"Yes, this is the news that I really wanted to see. This feels so good," I responded.

My cousin, Rohulamin, previously did his own test with Ancestry DNA.

The Ivory Coast and Ghana showed up as 12 percent on his results, the Iberian Peninsula appeared as 3 percent, and his largest ancestry appeared as Benin and Togo.

"When you think about it, the enslaved didn’t have any of this. As time passed on, a couple of generations couldn’t read, couldn’t write, couldn’t speak the original language anymore. It left you with a sense of loss," Rohulamin Quander said.

Slavery left black Americans with holes in our history that can now begin to be filled through the advancement of technology.

"If you just look at the results and just say, 'Oh, yeah. I’m such and such.' You have to understand there’s a story that goes with each piece of this," Rohulamin Quander concluded.

Rohumalin Quander is working to raise money to underwrite the first publication of a comprehensive, detailed historical account of the Quander family. CLICK HERE if you would like to support.