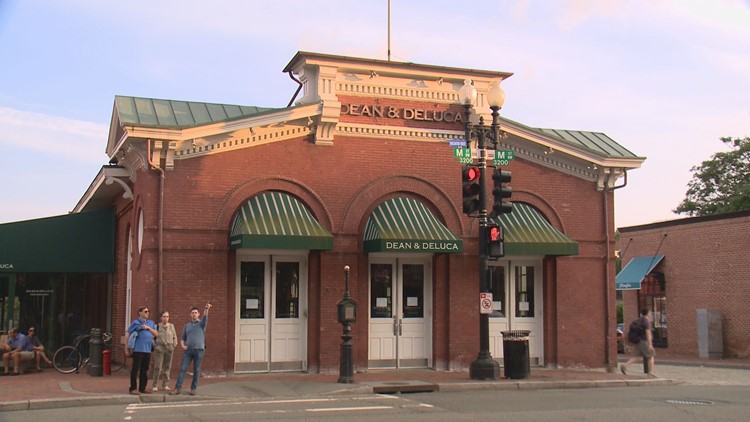 Photo by: WUSA
Dean & DeLuca in Georgetown closed this summer with little notice.

After 25 years, Dean & DeLuca shutters its doors in Georgetown

WASHINGTON — Upscale grocery chain Dean & DeLuca has closed up shop in the heart of Georgetown after 25 years.

The Georgetown location – the first Dean & DeLuca outside New York City, according to the Washington Post – is just one casualty.

Dean & DeLuca shops in California and New York have already closed, and the New York Times reports Stage, the company’s pilot cafeteria-style restaurant is also in the process of closing.

In fact, the company’s website only has four stores left – two in New York and two in Hawaii.

“Dean & DeLuca will focus on its flagship store located on Prince Street in New York city while it reassesses how to transform its business model to address challenges that are facing many brands in the sector,” a representative for the company told our partners at the Washington Post.

Dean & DeLuca in Georgetown after it closed.
WUSA

NYT has previously reported several vendors there were owed thousands of dollars, and Eater reports small businesses have turned to social media to complain about the money they are owed.

“According to the company’s own lore, Dean & DeLuca blazed a trail into the hearts of culinarians in the city, as well as tourists, by being the first store in New York to stock items like balsamic vinegar, dried mushrooms, and radicchio,” Brenna Houck wrote for Eater.

By 1988, they had upgraded to a giant new store with a sleek minimalist design.

News of financial struggles for the gourmet grocer surfaced last year, with the New York Post reporting Dean & DeLuca had pulled out of several leases in New York and London, as well as a shop in Charlotte closing after allegedly not paying three months rent.

Even the store here in D.C. had its issues.

The DC Health Department ordered the store to close twice for a “heavy infestation of vermin” in 2013 and again in 2014.