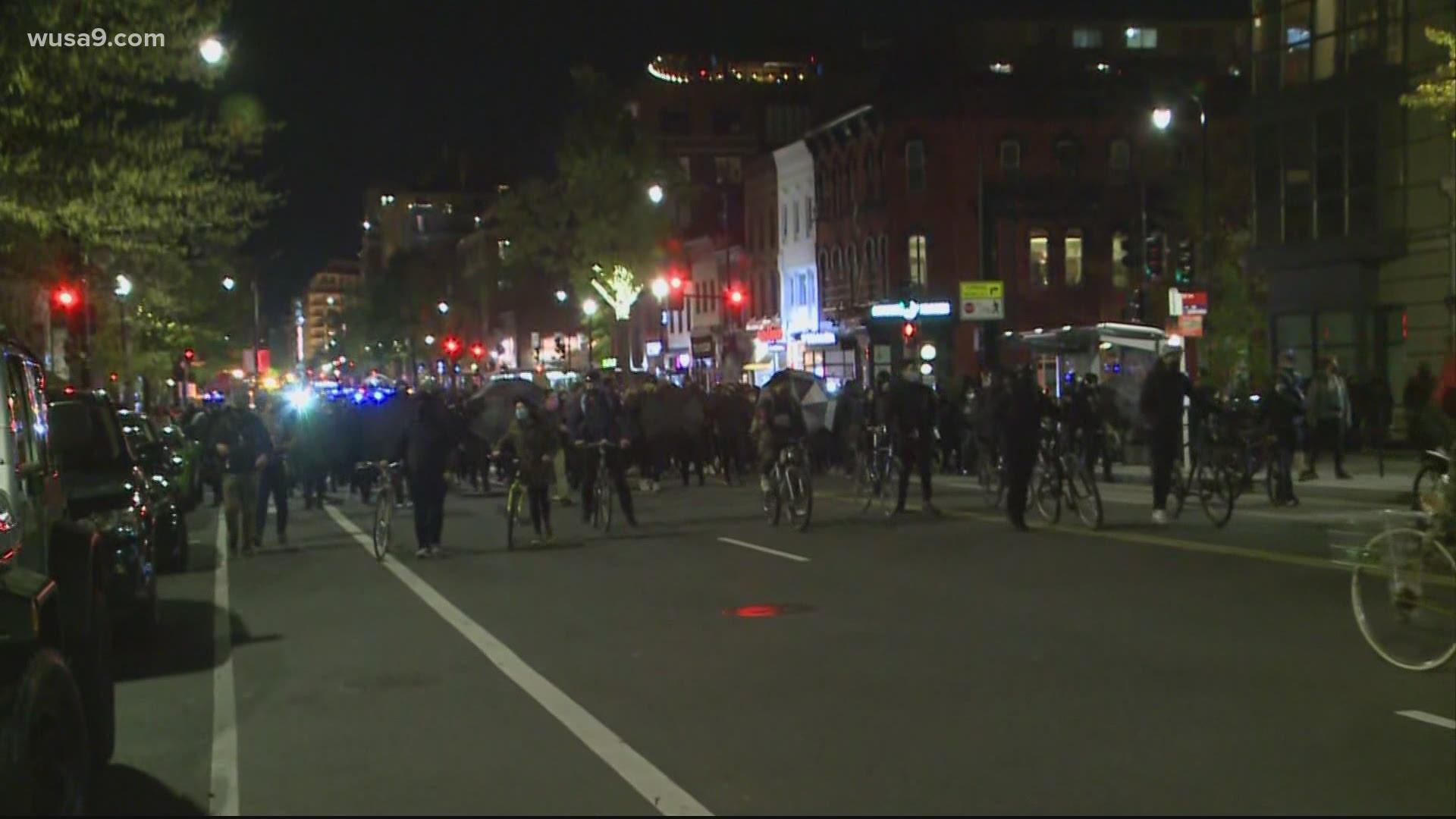 WASHINGTON — D.C. Police are preparing for possible unrest this week, as the Derek Chauvin trial nears its conclusion.

Closing arguments in the case of the former Minneapolis police officer are scheduled to start Monday. Once they conclude, the case will be turned over to the jury for deliberation.

With an intense nationwide focus on the case throughout the trial, the jury's verdict is expected to trigger reactions across the country.

In preparation for any possible unrest following a verdict, the entire D.C. Police force will be activated starting Monday. Time off requests have been canceled and sworn officers will be working 12-hour shifts.

Some demonstrations already took place in D.C. this weekend.

On Friday and Saturday night, crowds of protestors marched across downtown D.C. streets. The demonstrations came in the wake of the waning days of the trial and news of two high-profile police shooting victims across the country; Adam Toledo in Chicago and Daunte Wright in Brooklyn Center, just outside Minneapolis.

Many demonstrators in D.C. remained peaceful, though some set off fireworks near police.

Others spray-painted graffiti near the Christopher Columbus statue outside Union Station. Phrases including "MURDERER," "F*** PIGS," NO JUSTICE NO PEACE," and "Daunte Wright" could still be seen around the statue Sunday morning.

RELATED: Police: Man wanted for assaulting officer during protest on U Street

Revolution Church DC Pastor and Justice + Equality's Founder Devin Turner said with the deaths of Daunte Wright and Adam Toledo, and with the Derek Chauvin verdict looming, people are tired, angry and frustrated.

Turner reached out to organizers and community members Saturday to make sure potential protests this week are peaceful and safe for people to engage in democracy.

"Us encouraging our neighbors, and our brothers and sisters in the community to engage in protest peacefully is us saying absolutely let’s shout," Turner said. "And let's also engage our elected officials, let's move in policy as well, and let's not engage in physical altercations.”

Turner said if Chauvin is found guilty he believes there will be somewhat of a celebration, but if he's found not guilty there's going to a sense of frustration in the community.

"If the defense has a strong enough case, or whatever circumstances happen judicially, Derek Chauvin is found not guilty there's going to be great rage and frustration," Turner said. "Because George Floyd represents all of us. Every Black person that has ever been encountered with police officers, we all know that could have been us. It could have been us.”

Turner said to ensure peace during potential protests this week his organization is looking for volunteers to serve on a dispatch and response team to mediate with police.

“We are in contact with MPD this week to let them know we are going to be wearing identifiable colors saying hey we want to keep the peace, let us talk to our people, let us have a conversation so things don't have to escalate and get violent," Turner said.

Turner said there's a community emergency hotline for people who may need non-medical emergency assistance from clergy, community leaders, or neighbors during the demonstrations and protests, 202-280-2075.

Despite possibility of demonstrations next week as #DerekChauvinTrial nears its conclusion, buildings at #BLMPlaza are *not* boarding up this morning

D.C. At-Large Councilmember Robert White Jr. said the Chauvin trial, the death of George Floyd that sparked it, and the multiple high-profile deaths of men and women of color throughout the past year highlight a long-lingering wound for many.

"My first message is to D.C. officials and to the police which is that there is real pain," said White. "It is deep and it is real."

"I was 10 years old when the Rodney King verdict came down and I could not comprehend, at that time, how that could have happened," White added. "I've seen this story play out so many times and I'll tell you I'm not optimistic about the verdict."

For anyone who might be considering demonstrating this week, White and Reverend George Gilbert Jr. had a clear message: Remember the purpose.

"Anything that really detracts from the issue of racial justice moves us further away from the goalposts," said White.