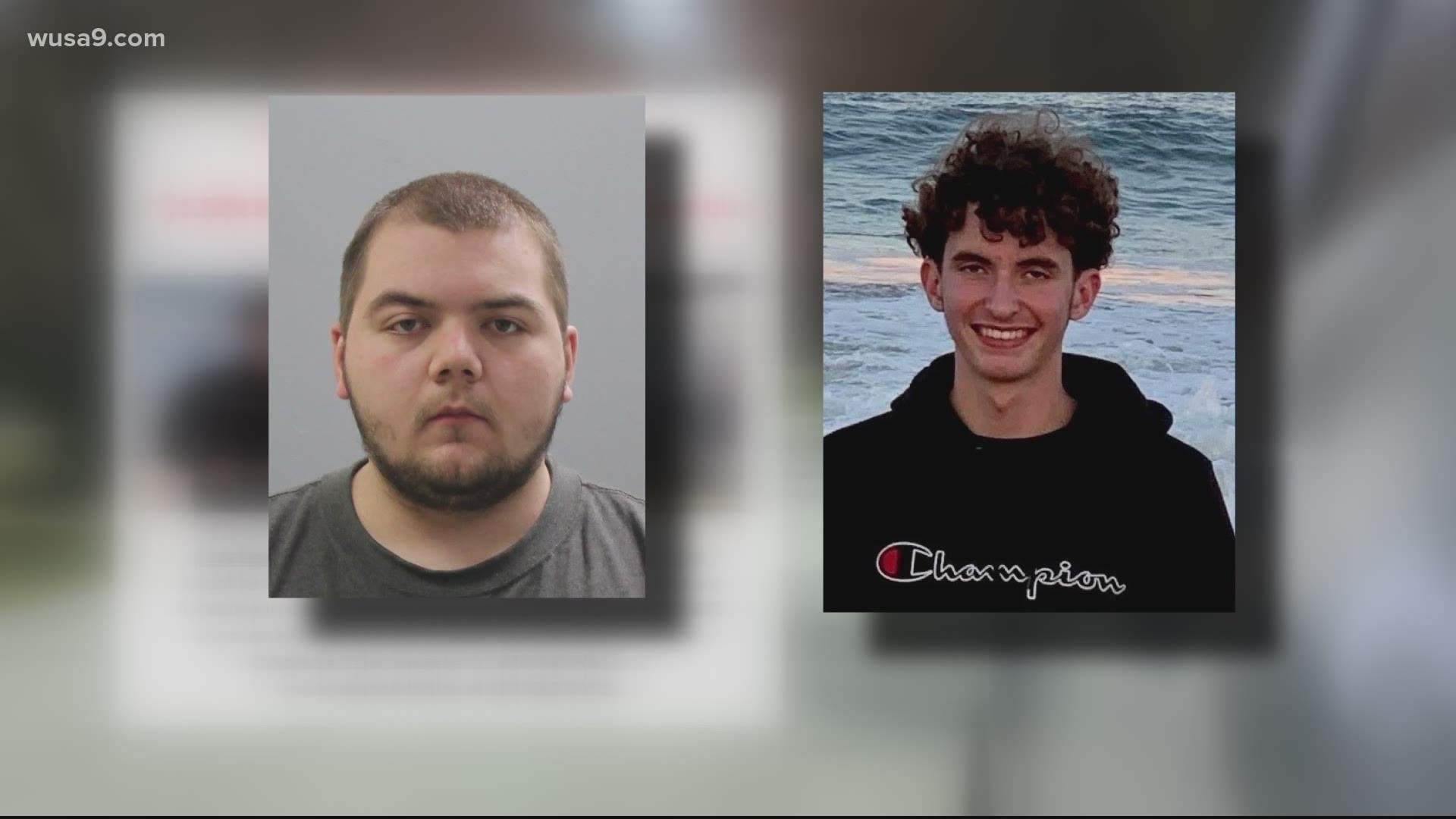 THURMONT, Md. — In the process of arresting a 19-year-old on murder charges, Frederick County law enforcement officials say they may have foiled a planned "mass shooting or mass casualty event."

While executing search warrants on 19-year-old Joshua David Eckenrode's home, police recovered nine guns, including an AR-15 and a shotgun, two live explosive devices, a tactical vest and a note to family apologizing for "having to go out this way."

Eckenrode was initially arrested Tuesday on charges of possession of explosive material and weapons, but on Wednesday he was charged with first-degree murder and use of a firearm in the death of 19-year-old Curtis Mason Smith, who was found dead in a car Sunday afternoon after being reported missing several days earlier.

In charging documents, Detective Josh Stears said Eckenrode's name came up during his investigation of Smith's disappearance, as someone Smith was reportedly meeting up with on the day he was last seen. Stears and Detective Tyler Deatrich met Eckenrode at an apartment in Thurmont, Maryland Monday and questioned him regarding his last communication with Smith. According to charging documents, Eckenrode told detectives that Smith was a former classmate, who was possibly going to sell his car to Eckenrode. Smith and Eckenrode were both graduates of Governor Thomas Johnson High School in Frederick.

Eckenrode admitted to the detectives that he met with Smith on March 19, the day he was reported missing, between 9 and 10 a.m. at Eckenrode's mother's house on Bethel Road. The detectives continued questioning Eckenrode about the intended purpose of his meeting with Smith, before Eckenrode finally asked to call his mom.

Detectives detained Eckenrode Monday night, and executed two search and seizure warrants at both the Bethel Road residence and the apartment in Thurmont where detectives initially questioned him.

At the Thurmont apartment, detectives recovered eight firearms, including four 9mm handguns, a .380 pistol, an AR-15 rifle, an AT-15 rifle and a .22 revolver.

They also found "possible bomb-making materials, to include, fuses, broken off tips of matches, gunpowder, and tanerite" two assembled explosive devices and a note addressed to Eckenrode's sister, mom and dad with his apologies for "having to go out this way."

"There was also a plan of action written detailing guns strategically stored in different 'Stages' at an unknown location," Stears wrote in the charging documents. "The above mentioned evidence was consistent with Eckenrode possibly intending on committing a mass shooting and/or mass casualty event."

During the search of the Bethel Road home on Tuesday morning, detectives recovered a tactical vest, tactical gun holsters, small bits of Styrofoam, flares, a box of firecrackers taped together and a shotgun from what the charging documents identified as "Eckenrode's bedroom."

The search also uncovered a large red spot next to a car in the driveway, later determined to be human blood, and trash bags filled with cleaning wipes, blood-soaked towels, and clothing, including a blood-soaked sweatshirt that Smith was believed to be wearing the day he disappeared.

"I went to the movies Friday around 1 and got back around 4 and saw the boy hosing the driveway down," neighbor Dennis Pesuti told WUSA9's Delia Goncalves.

Based on that evidence, cell phone records and interviews with multiple friends of Eckenrode and Smith, Eckenrode was charged with first-degree murder and firearm use in a violent crime. 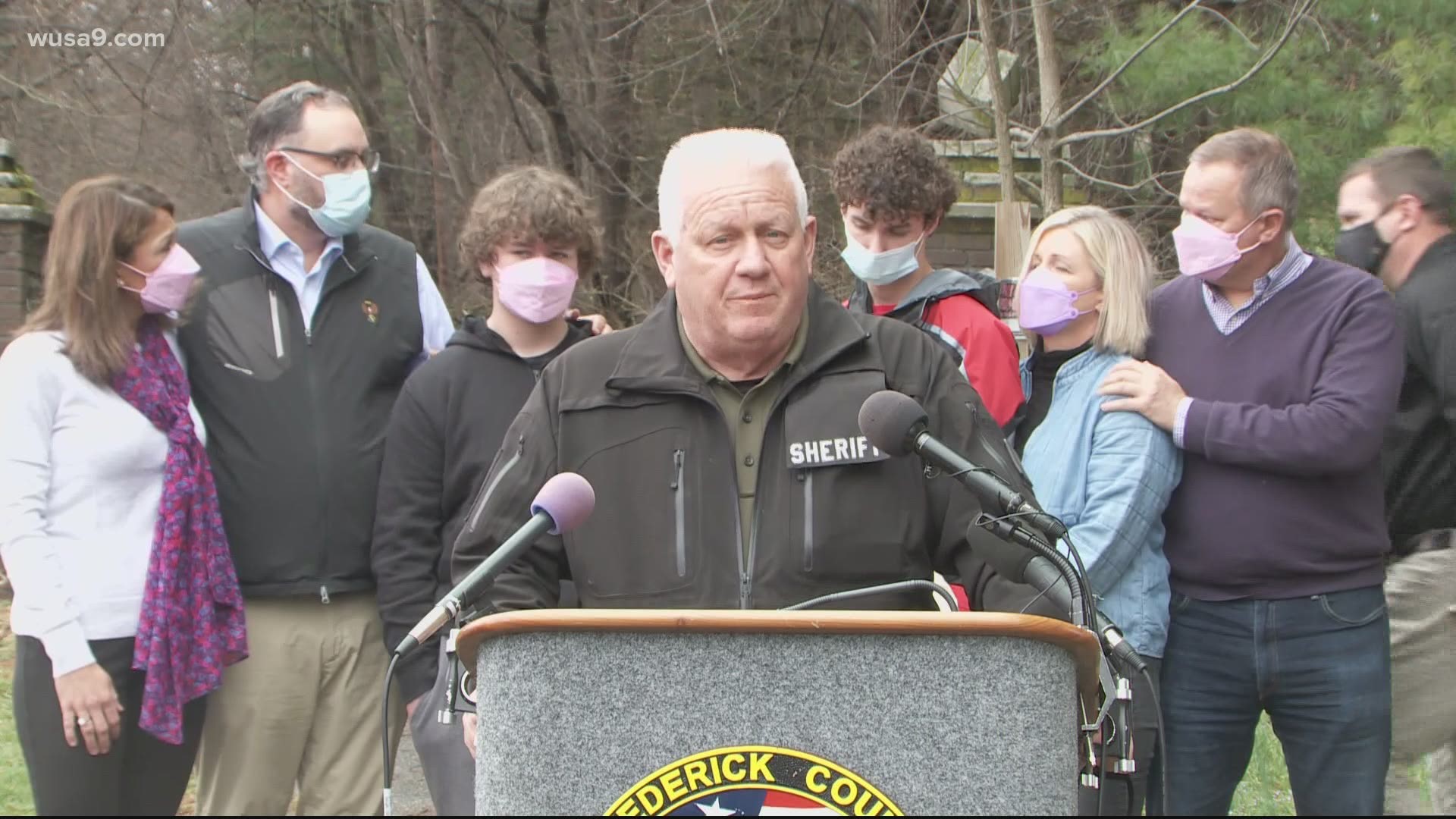 A friend of Eckenrode, who asked to remain anonymous, described him as a person who "didn't like it when you disagreed with him."

"He would get mad really quick," the friend said. "He's gone through counseling at school before."

The friend called the why behind the crime a mystery.

Frederick County Sherriff Chuck Jenkins said the incident has been tragic for the entire county.

"There's no reason whatsoever why a 19 year old should take the life of another 19 year old," Jenkins said. "The victim, in this case, was a bright young guy, a good student, with a great future ahead of him."

Jenkins expanded on what he called the "suicide-type note" his detectives found during the search and seizure and what details it gave about Eckenrode's plans for a mass casualty event.

"The notes were ... basically vague information about potential plans to carry something out," he said. "What that event was, what that mass casualty event may have been, we have no idea."

The sheriff said he had "no reason to believe" that Eckenrode and Smith were involved in planning a mass casualty event together.

"I don't believe for a minute that they were involved together in any of this thing that we're talking about such as any type of mass event," Jenkins said. "It's all over the county. Everybody just doesn't know why. What was the motive, what was the reason?"

Smith's sister told WUSA9 that her family is "asking for prayers" but that they're not prepared to speak publicly, right now.