Fairfax County officials appointed Kevin Davis police chief after he served in several posts across the region. Now, some locals are concerned about his past. 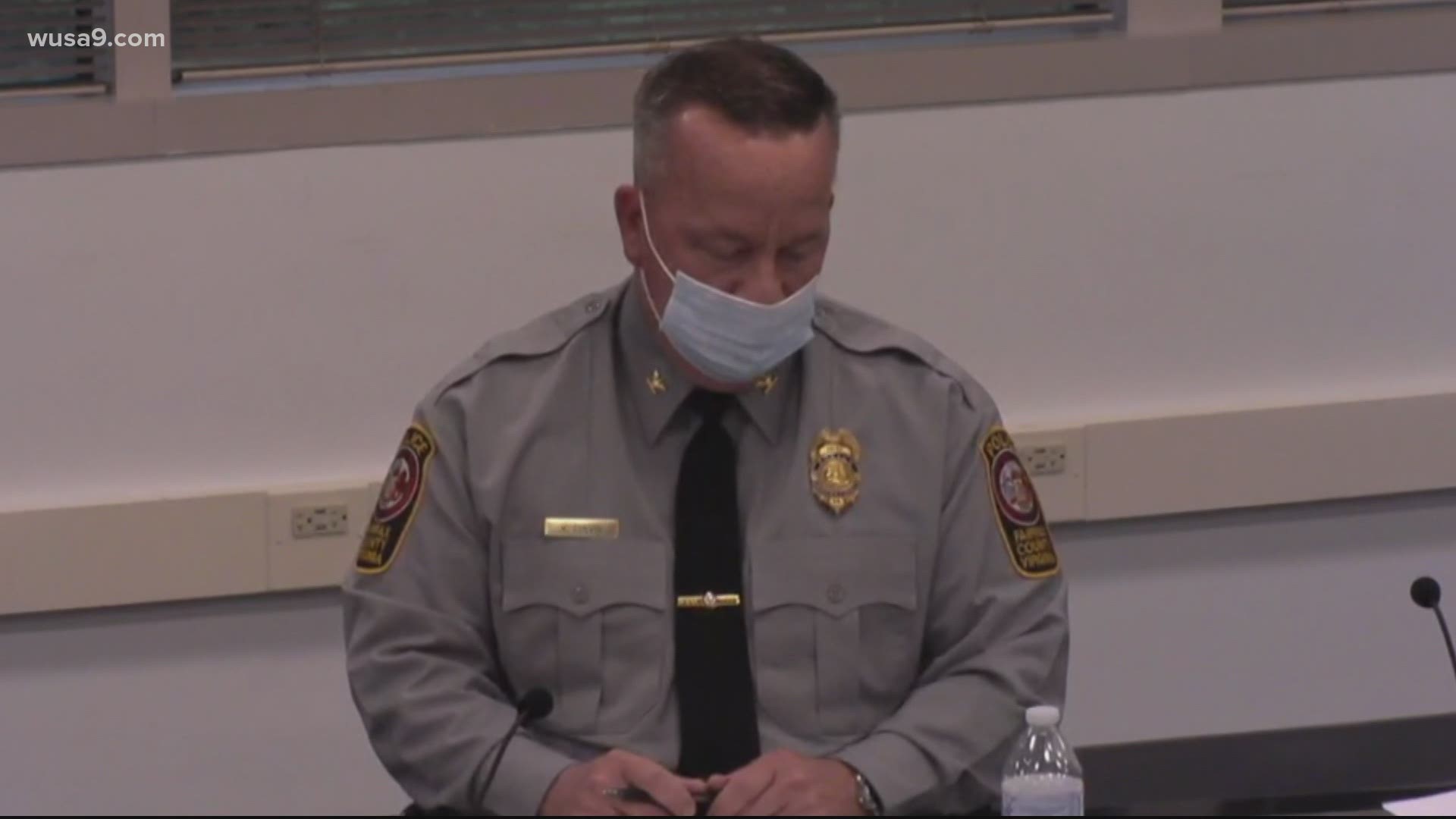 FAIRFAX COUNTY, Va. — Fairfax County Police Chief Kevin Davis spoke to the community’s residents Thursday after some locals claimed the process used to recently hire him was not transparent.

Davis is not new to the region.

He previously served as the Police Commissioner of Baltimore City, police chief of Anne Arundel County, and as an assistant chief with Prince George’s County all before assuming his latest position in Fairfax County.

The Fairfax County Board of Supervisors released a statement shortly after Davis’ hiring which said he was selected following a nationwide search.

“Chief Davis demonstrated to the Board that he can lead reform efforts, strengthen community relationships, and successfully manage change,” the statement read.

The board added that Davis had its full support and confidence.

“As the Chief, we also expect him to be a strong and effective advocate for the types of reforms that are designed to protect at-risk communities from police misconduct,” the board’s statement says. “The Board will accept nothing less going forward.”

However, Davis’ hiring has not been without controversy.

Davis was named as a defendant in two separate civil cases during his time as a police officer in Prince George’s County.

In 1999, a 19-year-old Laurel man named Brian Romjue sued the Prince George’s County Police Department, Davis, and several other officers for forcing him into a police car without a warrant and illegally detaining him for more than five hours.

Ultimately, a federal judge ruled against Davis and Prince George’s County in that case. Davis, the county, and the officers were ordered to pay Romjue $69,000 in that case. The judge also ordered all the officers involved to pay $5,250 in punitive damages.

“Scant descriptions of his track record or justification as to why he was chosen were provided to the public,” said Fairfax County NAACP President Karen Campblin. “The community was, once again, excluded from the process.”

Davis, Fairfax Board of Supervisors Chairman Jeff McKay, and Fairfax Supervisor Rodney Lusk all appeared at the meeting where they took calls from the community.

Davis introduced himself to the event’s participants as a progressive reformer.

“In Prince George's County, I lived through the lifecycle of a court-ordered consent decree and learned so much about what it takes to be a 21st-century police department,” he said. “And, in Anne Arundel County, I enacted innovations in policing that included being the first police chief in the region to insist police officers carry Naloxone.”

But shortly after Davis’ opening statement, locals questioned the new chief about his past.

“How can Davis be a strong and effective advocate for protecting at-risk communities from police misconduct, as your statement said when he committed such misconduct himself?" said Fairfax County resident Jeremy Monat.

Another resident also said he had lost confidence in the process by which Davis was hired.

“I’ve become one of the most progressive reform leaders in our country and I'm proud of that journey,” he said. “Was it always a perfect journey? No. But I've learned from everything I've done throughout my career.”

“Our plan will focus on some key areas that the community demands we improve upon,” he said. “Use of force, particularly time, distance, de-escalation, and tactical repositioning of police officers in critical situations. We’ll address and train our police officers about implicit bias.”