Deanwood Library Kiosk was the area's only library from 1976-2008 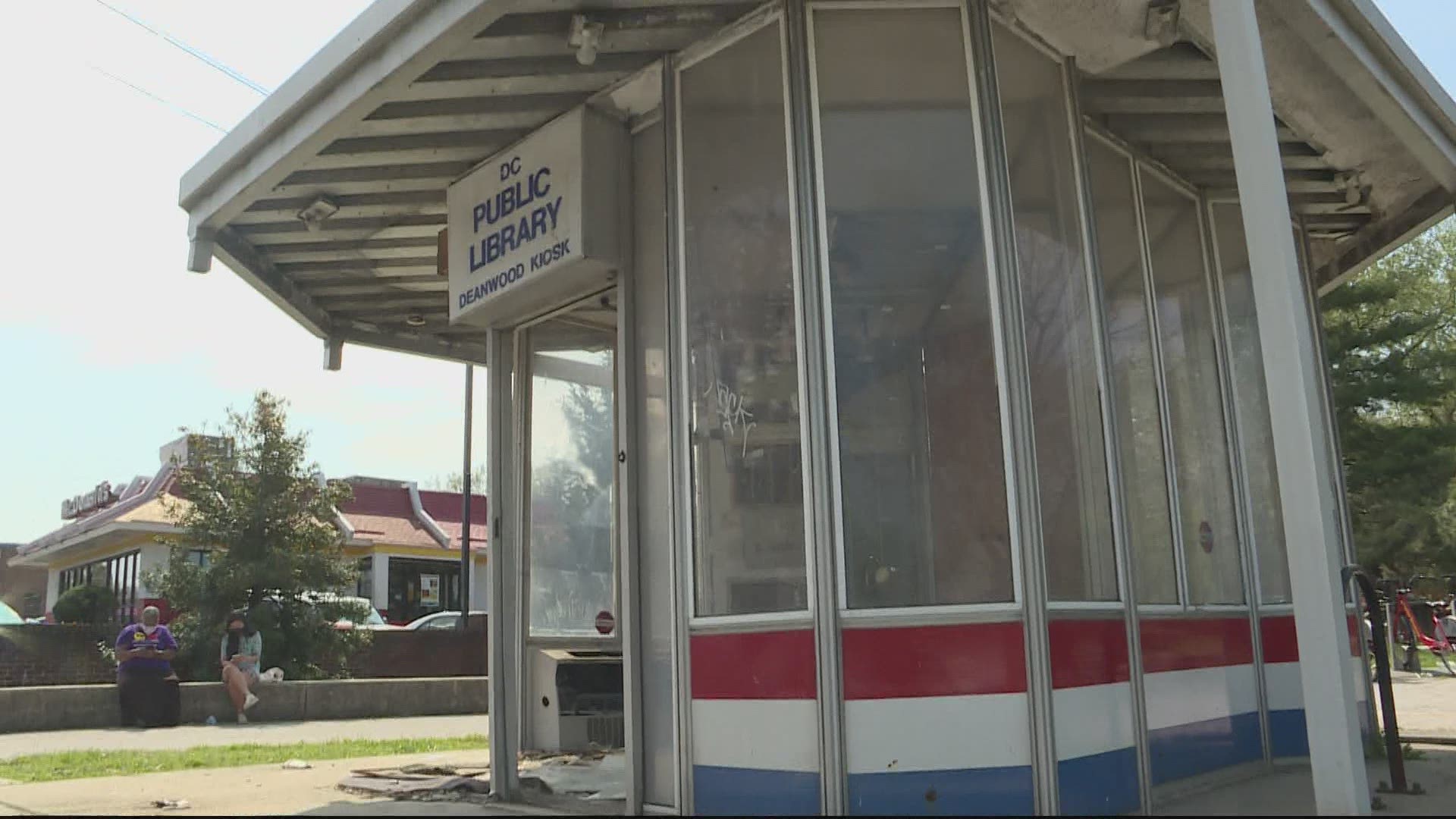 WASHINGTON — At 120 square feet, 5,000 books, and no indoor plumbing, local historians say the Deanwood library kiosk is one of the smallest libraries in the nation.

Although it has not been in use since 2008, community leaders are fighting the city’s attempt to demolish it.  “It needs to be preserved or given back to the community,” said Alicia Rucker with the Friends of Deanwood Library.

It’s easy to miss driving the aluminum kiosk down Nannie Helen Boroughs Avenue in Northeast, but the library kiosk sits at the entrance to Marvin Gaye Park and is bordered by a rack of red RideShare bikes.

The kiosk is a bit of an eyesore now after a car crashed into the glass walls in 2020, but it brings up fond memories for locals in Deanwood.

“Oh, I remember the kiosk,” said Arnette Lee, “I would like the kiosk brought back to life. There’s still a lot of kids in this community so I’d love to see them be able to walk and get a book.”

According to DC Public Library Archives, it was one of three library kiosks built in largely African American communities East of the River.

“During that time in the 1970s the only libraries that were built or existed were west of the river, the Carnegie libraries, these grand big libraries,” explained Thien Vinh Nguyen of the Friend of Deanwood Library. “so we got this kiosk.”

The small space contained just a few thousand books, one librarian, no computer and a sign which is still posted on the wall. It is D.C. Public Library’s Vision that includes “equitable access to information.”

When neighbors learned of the city’s plan to demolish the kiosk, they launched a petition renewing their efforts to take back that space.

“I’d like to see it repurposed for community use,” said Rucker. “This whole area of Deanwood is historic, we need to preserve it to show our children when a community works together, they can get what they want.”

The ladies are not only advocating to reclaim the kiosk -- which is a featured stop on the Deanwood Heritage Trail -- but they are demanding a stand-alone library.

That current library at the Deanwood Recreational Center was open in 2010, two years after the kiosk closed.

“We want to creatively reimagine and reuse this space as with historic landmarks throughout the city and honor and preserve its history - a history that is stark in its inequality, yet a history that brings up warm and lovely community space for the neighborhood,” said Nguyen.

Since the petition was launched, the local ANC commissioner told WUSA9 the demolition was put on hold.  A spokesperson for DC Public Library said they can not maintain the site with taxpayers’ dollars if it is not a current library.

The master plan includes a free-standing 20,000 square foot library for the Deanwood community in the next 10 years.