"I am working a minimum wage job, please stop threatening to hurt me." 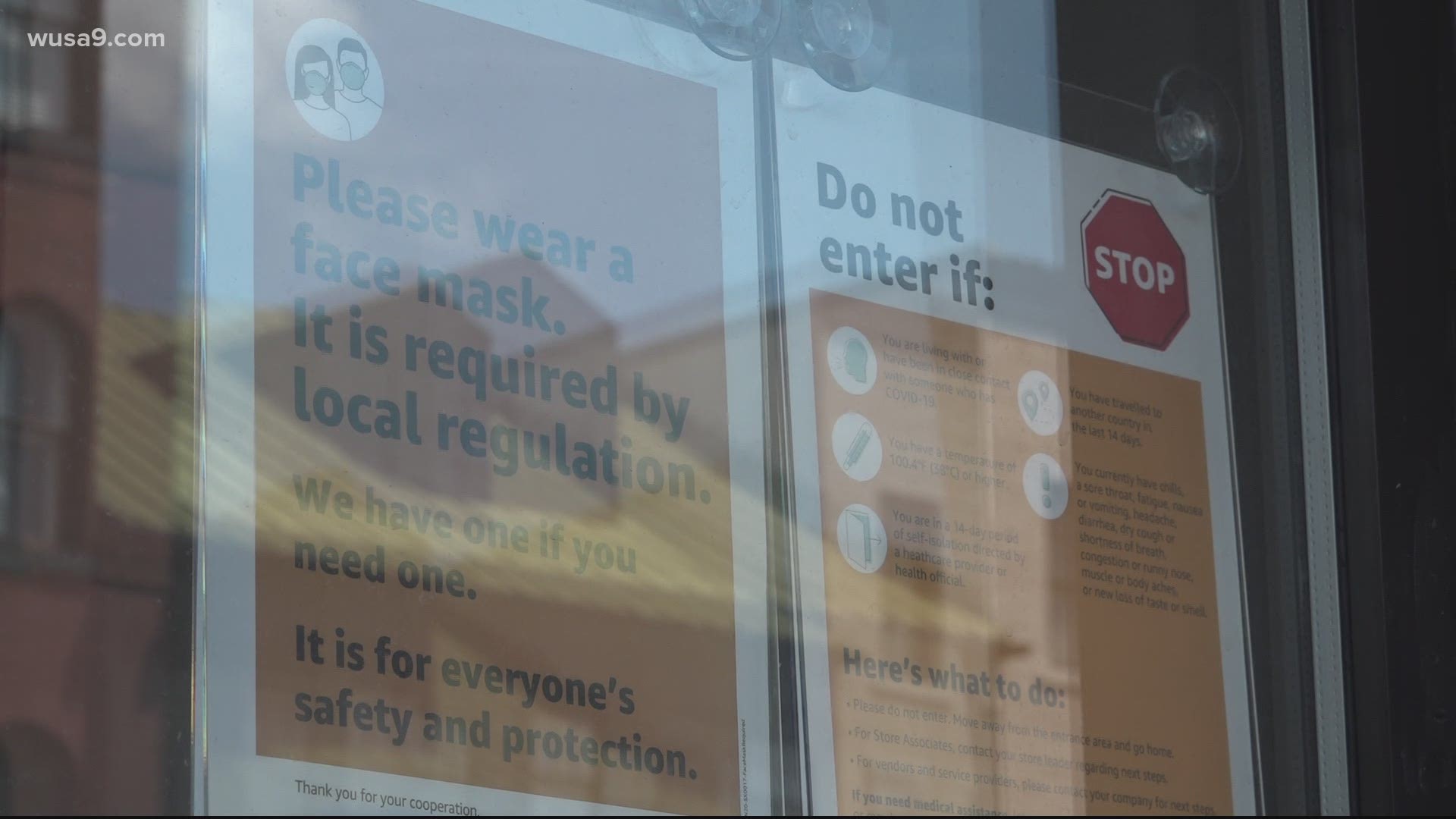 WASHINGTON — Leaders in DC, Maryland and Virginia have mandated masks inside businesses. But, some restaurant workers say they're facing hostility from customers when they try to enforce those orders.

Andrew Alfonso is a rising senior at Georgetown University. Even though his fall semester will be virtual, he's opted to stay in the DC area.

To cover his rent over the summer, he took a minimum wage job at a DC restaurant.

“I’ve worked retail, cashier jobs before, so this should be fine," Alfonso said. "I’ll just go there 20 hours a week and it’ll be an easy summer job.”

After starting in June, he said that quickly turned out not to be the case.

“Obviously you have customers that are totally respectful of the mask rules, but you get a lot of people coming in that are just there to fight you," he said. "And we have a sign in the front of the store that’s like you need a mask to come in, so I don’t know why they come in without a mask. But I’ll just be like, hey sir do you mind putting on a mask, and sometimes they're like my bad I forgot, and I'll put it on. Other times, they'll be like this is bull*** ... I’m just like I don’t know what you want me to do. The issue is when they try to fight me afterward.”

Per @MayorBowser, @GovLarryHogan, & @GovernorVA, you have to wear a mask when you go inside a business.

But, some restaurant workers say they're facing hostility from customers when they try to enforce that.

Here are Andrew's 2 requests to customers. Hear more on @wusa9 at 11! pic.twitter.com/g8RG2FDnXY

Alfonso said in the past one-and-a-half months he's worked at his restaurant, he's experienced upward of 20 hostile incidents involving customers being asked to wear masks — four of them involving threats of violence.

"The guy’s like this is bull***. I don’t need to wear a mask to eat blah blah blah, and I was like sir, I can’t serve you unless you wear a mask, and he was like whatever this is stupid. And he and his girlfriend turned to leave, and I was like goodbye," Alfonso said. "And he turns around and he says what the f*** did you just say to me, do you want to go? His girlfriend stepped in … That’s when I was like oh Jesus."

He said those types of altercations are especially scary when they happen later in the night and he has to leave work at midnight.

"It’s more the credibility of their threats. They’re straight up going I want to beat you up … I always look around before I leave the restaurant now," he said. "I'm scanning the area, making sure my phone is out … I’m already dealing with a pandemic, I shouldn’t have to worry about my safety outside of that. So there’s a general sense of uneasiness, and sometimes they come back too, which is the other scary thing … so it’s very just a genuine sense of fear.”

He said these incidents have given him even more of an appreciation for retail workers who deal with difficult people regularly. Now, Alfonso tips more when he goes out to a restaurant to eat.

Videos of other confrontations between customers and employees over masks have gone viral, like an incident in Colorado, where a woman refused to wear a mask in a liquor store, even though the sign clearly said it was required.

With those and his own experiences in mind, Alfonso has two requests for people going out to eat during the pandemic.

“Please wear a mask and second off, I am working a minimum wage job, please stop threatening to hurt me. That’s my main message," he said.